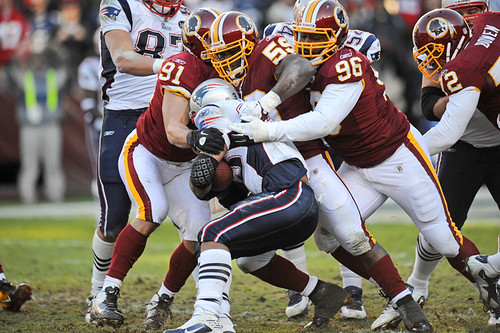 The 2011 season was an up-and-down campaign for Washington Redskins defensive tackle Barry Cofield. While he was happy to come to Washington and take on a more vocal leadership role with his new team, he also had to learn a new position and suffer through a disappointing 5-11 season.

One year later, things look much better for the future of the Redskins, as far as Cofield is concerned. Not only did the franchise make the bold decision to trade several high draft picks for the right to select Robert Griffin III in the 2012 NFL Draft, but just as importantly to the nose tackle, they didn’t make any sweeping changes to the defense’s front seven.

With that type of continuity, Cofield is confident the defense front is capable of great things in ’12.

“I’ve got big aspirations,” he said. “I don’t feel like we’re a rebuilding team. I don’t feel like we’re a team that’s a year away. We’re ready to compete this year, and the goal is to win and be a playoff team this year. We want to win every game we play. On defense, we’ve got guys who have spent a year together now. We’ve got veteran guys. We’ve got leaders and we’ve got some really talented players.”

As far as head coach Mike Shanahan is concerned, Cofield is definitely someone who falls into the talented veteran player category.

“With Barry, it was probably just an adjustment mentally, mindset-wise, of going from a 4-3 one-gap defense to being a 3-4 nose tackle,” said Shanahan. “It’s a totally different mindset where it’s not just run gap, ‘take that gap’ stuff like that. It’s a little bit more running sideways, stuff like that, keeping the linemen off the linebackers, realizing that you’re probably not going to be making a ton of plays. So as a guy you kind of have to change your thought process, but I thought he did great with it.”

So while casual sports fans might look at the box score and not see monster numbers next to Cofield’s name, his coaches and teammates know that his impact on a game goes far beyond a box score. Linebacker Perry Riley, for example, said when the guys up front are doing their jobs, the middle linebackers “pretty much run around free.”

“Realistically it’s not going to be a ton of big plays,” Cofield said. “That’s just not what the position entails. The one thing that I do rest on from last year is that [middle linebacker] London [Fletcher] led the league in tackles and made it to the Pro Bowl. He obviously appreciated the work I did up front, but I just feel like I can do it better. I feel like I can make a few more big plays. I feel like I can be in the quarterback’s face.

“We’re doing some things differently up front that are going to hopefully get the nose tackle some one-on-ones to be able to push the pocket and harass quarterbacks and even get some sacks,” he added. “Last year I think I had two, three sacks. That’s not horrible for a nose tackle, but I feel like with the skill set I have I can improve and I want to get a couple more.”

While the defense has made some subtle changes this offseason, it’s not like these players are having to learn an entirely new system. Cofield, for one, believes having a year under his belt is only going to make him more effective in Washington.

“I think it’ll make a huge difference,” said Cofield. “Honestly, I go back and review myself last year and I’ve played a lot better than that. It was a growing process. I gave myself some leeway for that, but having a true offseason this year, being able to watch a lot of tape and do all the learning and having this training camp and us as a unit.

“The great thing is that they brought [defensive end] Adam [Carriker] back,” he continued. “I think that did a lot for continuity. Then you add [defensive end Jarvis] Jenkins back into the mix and Chris Neild played well. We’ve got a lot of guys and I think our depth is going to be surprising to a lot of people.”

It’s understandable that some players are going to be tougher on themselves than others, but is there a specific aspect of Cofield’s game that he felt like should have been better last season?

“Nothing specific, just doing everything better,” Cofield said. “I go back and watch a lot of Casey Hampton Steelers tape throughout the years. He’s kind of the godfather of the nose tackle position as we play it today and he did it well. He did some things better than me and there are some things that I can do with my natural ability, with my athleticism, that I bring to the position that not a lot of other guys can do. So it’s just getting better at everything and have everything be second-nature. By the time I left New York, everything was second nature. People had to catch up with me. Last year, I felt like I was playing catch-up. I can already see a difference in the beginning of camp.”

Shanahan said he can already tell that Cofield feels more comfortable with what he’s being asked to do this year, compared to last season when the 28-year-old was transitioning into his new role.

“I think everybody knows Barry, with his background with Giants, what type of leader he was,” Shanahan said. “As you could see it when you went against his football team, exactly what he brought to their organization. Once he came in here, you could see what type of worker he was and what type of leader he was. I think Barry feels a lot more comfortable this year with our scheme and therefore his leadership has shown up more than a year ago because he’s more confident with the people around him, the supporting cast.”

One thing that stands out when looking at Cofield compared to other nose tackles in 3-4 schemes is he isn’t nearly as large as some of his colleagues. Even so, the seven-year pro believes that shouldn’t be a problem.

“First off I’m bigger than the 306 than I was at the combine, so I’m not the smallest guy on the field by any stretch of the imagination,” Cofield said. “It’s really just about technique, pad level, and just work in the weight room. I kind of took a different approach last season. It was in the lockout. I didn’t know where I would be. I didn’t know if I was going to go to a team where I was going to be getting up the field, or I was going to be a 3-4 end, 3-4 nose. I had no idea, so I didn’t know how to train. I was just trying to be in shape.

“But now having a specific guideline,” he continued. “Knowing what I was expected to do, knowing what kind of blocking schemes I’m going to see, I was able to take a different approach this offseason — really train my core and my leg strength and things that you might not even associate with a nose tackle. You think of a gut, but you don’t realize that you can have a gut but you can have a strong core up under that stomach.”

More than once this offseason, Cofield has stated his goal for the 2012 season is to have the Redskins defense finish the year in the top 10. Apparently he’s said it often enough that his teammates are now echoing his sentiment.

“Exactly what he said,” said linebacker Brian Orakpo. “He’s one of the guys that we respect on this team, and he knows what he’s talking about. The first year with Haz [defensive coordinator Jim Haslett] we were 31, and the next year we were 13. That’s a huge improvement for any defense in the league. This year we expect to improve from 13 and get into those top 10, those top defensive numbers, so we expect a lot. We’re going to put a lot of pressure on ourselves to make sure we achieve those goals.”

This offseason was special to Cofield and his wife as they welcomed into the world their second son. And if things go according to plan once football season begins, Cofield will have even more reason for celebration in the not-too-distant future.