is perry riley poised for a breakout season? 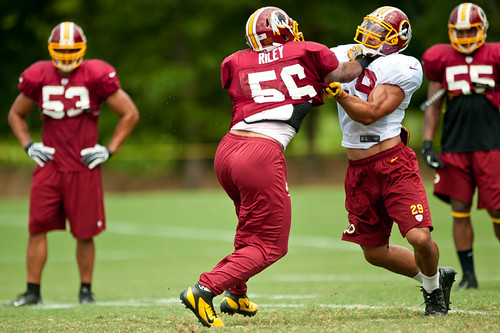 With apologies to defensive lineman Jarvis Jenkins or outside linebacker Ryan Kerrigan, the defensive player I’m most excited to see take the field this season for the Washington Redskins is middle linebacker Perry Riley.

Why? Because even though he was basically playing on adrenaline and instincts last season, he showed why the team selected him in the fourth round of the 2010 NFL Draft. Even though he was still learning on the fly, once Riley was able to work his way onto the field, he proved early and often that has one thing you simply cannot teach — a nose for the football.

Halfway through the 2011 season, Riley mercifully took over for ineffective linebacker Rocky McIntosh in the starting lineup and almost instantly, the gaping hole in the middle of Washington’s defense vanished. Consider this: during the first half of the season — when Riley was in a reserve role — the LSU product had just one tackle in eight games.

Once he became a starter though, Riley responded with 34 tackles in his first three starts and finished the season with 68 tackles on the year (fourth best on the team). The 24-year-old came on so strong during the final eight games of ’11, that Pro Football Focus has dubbed Riley “a secret superstar.”

And they’re not the only ones who are raving about Riley.

“I think Perry is going to be a heck of a football player,” said head coach Mike Shanahan. “He’s got natural instincts. He’s obviously a lot more comfortable with the system going into this year. He is a playmaker. He has great speed, great agility and always seems to be around the football. There are some people that are just natural football players and he is one of those guys.”

Along with Pro Football Focus, you can go ahead and count Shanahan as someone who is looking forward to seeing what Riley is capable of after a full offseason of preparing to be a starter.

“It’s a big plus to be able to be in meetings for eight weeks with your coaches a couple hours a day and just go over the system,” Shanahan said. “But actually to get a chance to go on the field and work on a number of the little nuances that you have to go through and learn the new system especially when he’s starting from the first year at least a whole season, but he enjoyed meeting. He’s really starting to become a student of the game. Being around a guy like London Fletcher I think really helps him and you can see that he’s getting better and better.”

Speaking of Fletcher, he too is a fan of Riley and has already seen growth from the youngster during his limited time in the lineup.

“Just formation recognition, being able to react quicker as far as knowing, ‘Okay, what my responsibility is,’ and so when something happens being able to react just half a step faster because he’s more comfortable in what his responsibility is,” Fletcher said. “When you can come break the huddle, recognize formations, knowing, ‘Okay, the team likes to do this in that certain situation.’ His experience in the game last year is going to be so much … and he’ll be light years ahead of where he was just because of that.”

Because I truly feel like the 2012 season could be a memorable one for Riley, I caught up with him after practice earlier this week. Here’s what he had to say:

At the end of last season, every time I looked up, you were closing in on whoever had the football. Am I wrong or do you have a nose for the football?

“I guess you could call it that,” he said. “I just try to execute my assignment. In this defensive scheme we run, the middle linebackers pretty much run around free. The defensive front does a great job of keeping the O-linemen off of us, so it’s my job to run around and get to the ball.”

When you first starting getting solid reps, you really seemed like you were making it up as you went along to a certain degree. How much more comfortable do you feel in this defense now that you’ve gotten solid playing time?

Could you eventually see yourself taking over for a guy like London Fletcher, where you’d ultimately be the guy quarterbacking this defense?

“Yeah, I feel like if I had to run the “mike” and call the plays one day, I definitely feel like I could do it,” he said.

So now that you’ve had an entire offseason to get more comfortable in this system, what can we expect from you this season?

From where I’m sitting, the front seven of this defense is the strength of this year’s team. What say you?

“I agree, because if a team can’t score, they can’t win,” he said. “So, if we hold every team to zero, then we should win every game. That’s how a defense has to go out there and think. We’re definitely gonna be the backbone this year.”

Okay, before we get too excited though, I’ve got to point out that seemingly every offseason Redskins fans get all fired up and start talking crazy, and then once the season starts, things don’t always go according to plan. What’s it going to take for this team to turn the corner and finally get to where everyone wants you to be?

“Consistency,” Riley said. “Last year, I feel like we were in every game. If not every game, 95 percent of them. We would kind of give it up at the end or make mistakes here or there to blow a game. We just need to be more consistent and finish out games. Play all four quarters and stay on top of what we’re all supposed to do. If we do that, we should be alright.”

You said earlier, if a team can’t score, they can’t win. So what are you seeing from that highly-publicized rookie quarterback over there on the other side of the ball?

Before I let you go, I just want to double check something you said earlier. You guaranteed you’re making the Pro Bowl this year, right?