helu on marriage, running back committees 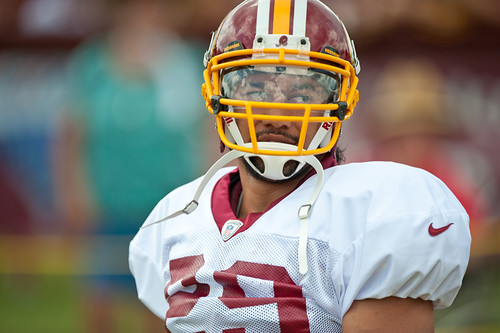 Why no love for the two-time Super Bowl winner, you ask? Because it’s impossible to guess which running back will shoulder the load on a Shanahan-led team on any given week.

Unless Terrell Davis or Clinton Portis are prominently involved, Shanahan has always been happy to go the running back-by-committee approach. While this might be best for getting the most out of your players, it can be absolutely maddening for anyone trying to guess which back might be the go-to guy on any given Sunday.

Even the “so-called experts” are left guessing who Shanahan will give the bulk of the carries to week-to-week.

Take, for example, ESPN.com’s fantasy football rankings, which currently list Roy Helu Jr. as the 21st best option at running, with Tim Hightower at 54 and Evan Royster at 57. This is interesting because when the Redskins released their first depth chart of the season Monday, Hightower was listed as the starter, with Royster second and Helu third.

Of course, the Redskins also thought highly enough of Helu to feature him on a season ticket this year, which could have been viewed as a good sign for the second-year pro … if they actually got his name right.

Shanahan was asked recently how he decides which running back gets the most repetitions during a given practice,and here’s what he had to say.

“Number one, we have to stay healthy,” he said. “Helu and Royster, with the limited play they both have been hurt, so if you are going to take some more reps, obviously you have to stay healthy. So it’s a combination. Can a guy stay healthy when he does perform? Is he consistent doing what he’s doing? What I mean is, first and second down as well as third down.

“Some guys can’t block those linebackers,” Shanahan continued. “They’re more runners than pass protectors. So if we can get a guy that can do it all, obviously we’d like to leave that guy in and play all the time. There’s some backs in the league that do.”

With that in mind, has one running back emerged as a favorite to be your opening day starter?

“I’ve been asked this question a lot of different times,” Shanahan said. “I really don’t know how to answer it because you don’t know until guys get in game situations with running backs. Sometimes you get a running back that can carry the load by himself. Most of the time you kind of have two or three guys, but we’ll just have to wait and see as the preseason goes on who wins the playing time.”

Last season, it was Helu who led Redskins running backs in most categories — including carries (151), yards (640) and touchdown runs (two). He also had 49 catches for 379 yards with a touchdown reception.

In total, Helu finished the year with 1,019 total yards on 200 touches, which means the 23-year-old averaged more than five yards every time he had the ball in his hands. That’s the kind of consistent production that makes people take notice.

With that in mind, I caught up with Helu recently to see how he spent his offseason and to find out once and for all what it’s like to play for the most hated coach in fantasy football history.

How did you spend your offseason?

“I went back to California and spent time with my wife and family,” Helu said. “It was great. I was probably able to spend a full two weeks out there, which was phenomenal compared to when I was in college.”

Wait … did you just say wife? When did that happen and how has life been since the big wedding day?

“Oh, it’s been great,” he said. “Getting married to your best friend and seeing things come together so easy … we can’t even take any credit for it. It was in God’s hands and we’re just thankful to be a part of it.”

Well it sounds like everything is going well off the field. How’s life been for you on the football field?

“Everything is going well,” Helu said. “I’m just trying to be consistent in everything and put plays together one at a time. I’m trying to put the plays that I don’t execute as well in the back of my mind and keep on moving forward.”

Last season, you were fairly reserved with the media, but then I talk to someone like Evan Royster and he says you’re one of the funniest people he’s ever met. So what’s the story here? Are you holding out on us or what?

“I don’t want to put everything on display,” he said with a smile. “I gotta keep some things behind the scenes, so I’ll show my personality every once in a while if certain questions come up, but I won’t go out of my way.”

So what is your relationship with Royster like? Obviously you two are competing against each other, but it sounds like you two are pretty close as well.

“Yeah, we’re all competitive, but we all look out for each other,” Helu said. “That’s just the type of guy he is. He brings to the table a lot of great things — a lot of wisdom and knowledge in this running scheme that I can learn from. He’s very reserved and very quiet and I just get chuckles out of him, so maybe that’s why he likes me a little bit.”

Both of you seemed to get better as the season progressed last year. Do you feel like the two of you did enough in your rookie year to have something to build on in year two?

“Absolutely. It breeds confidence that we’ve earned the right to play in the NFL, but at the same time, it’s no way indicative that we’ve earned anything for the future,” he said. “I think we’ve got to keep that mindset because it is true.”

Fantasy football owners despise Mike Shanahan’s approach to the running back position because it’s virtually impossible to guess who is going to be the primary back. As someone involved in the situation, what are your thoughts on the subject?

“That’s the way it should be,” Helu said. “Absolutely. You earn what you get. And if someone else is playing better, that means the team will play better. If someone else is not playing up to par, competition breeds greatness. That’s what they really believe in here, and it goes from the head coach down to every position. It keeps you hungry and makes you have to show up every single day.”

For most rookies, training camp is a time when their heads are spinning as they try to take it all in and learn what it takes to be successful in the NFL. Now that you’ve got a year under your belt, how much easier is life this year?

“I don’t know. Being married now, it brings a newness to everything all over again,” he said. “I’d say that everything is new again this year. Last year, everything here was new and now it is again because I’m away from my wife day after day.”