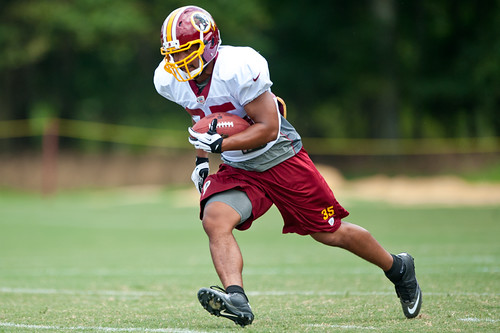 Since training camp begin a little more than a week ago, Washington Redskins second-year running back Evan Royster has done his best to make those in attendance take notice. Even though the 24-year-old is in a crowded backfield with no clear-cut leader, he’s done a respectable job of forcing his way into the discussion as the Week 1 starter.

That’s a far cry from where things stood one year ago for Royster, who was unable to make the 53-man roster out of training camp. Instead, he started the 2011 campaign on the practice squad. While it wasn’t the ideal start for the Fairfax, Virginia, native, he feels like he learned an invaluable lesson from that experience.

“Just that I have to bring it every day,” Royster said. “Last year, there would be days when I was kind of off. At this point, I can’t afford to do that, because we’ve got rookies coming in and nipping at our heels. We’ve got to go out there and perform.”

Not only that, but there have been rumors from time to time that the team might be interested in signing a veteran back like Cedric Benson to solidify the depth at your position …

“It motivates me to want to show the coaches that we don’t need a guy like that,” he said. “We have what we need in-house right now, and we can win with what is here.”

What was your mindset when you got the word that you were going to start last season on the practice squad? Did you ever consider asking the team to let you go so you could try to land elsewhere?

“I didn’t want to go anywhere else, to be honest,” Royster said. “I wanted to be with this organization. I mean, I love being in D.C. I love the fans here. They’re awesome. And this is home for me. I went to high school 20 minutes down the road from here.”

You left both Westfield High School and Penn State as the all-time leading rusher. What does that do for your confidence level as you try to show you belong in the NFL?

“I tell you what — honestly, that has nothing to do with the professional level,” he said. “You can go to high school and college and be the greatest person ever and get to the NFL and be nothing. I try to remind myself of that because up here, I still have to prove myself. I haven’t done anything to prove myself and that’s what I want to do this year and in the years to come.”

It seems like you and Roy Helu Jr. have a fun and unique relationship. For example, a day or two before training camp started, he was busting your chops about your “Hello Kitty sleeping mask.” For those who don’t know him, what is he like?

He’s so guarded when he’s dealing with the media, but you can tell it’s in there somewhere …

“I love him,” he continued. “He’s one of the funniest people I’ve ever met. He’s just real quirky, real weird. But it’s so funny and there’s nobody else like him.”

And with Tim Hightower, you’ve got a veteran presence and a locker room leader. What has he been like to work with?

“You know, he’s just a great leader,” Royster said. “He’s out there helping us and he really knows what happens in game situations. When he sees something in practice that might go a little differently in a game, he’ll come up to us and help us to make adjustments for it. Like I said, we’re all just trying to help each other. When somebody is off the field, we’re watching what’s going on so we can all help the person who is in.”

When you talk to a rookie going through his first training camp, it’s safe to say that his head is usually swimming …

“I know the feeling,” he said.

“It’s so much easier because I don’t have to worry about ‘What do I have to do on this play?’ or anything like that,” Royster said. “I can just go out there and play. It’s something where last year I was out there wondering about my responsibilities and what did I have to do. Now I can just go out and play football — the same game that I’ve been playing for 15 years.”

You closed out the ’11 season on a high note, with 245 rushing yards in the final two games of the season. Do you feel like that’s something you can build on?

“Absolutely,” he said. “But just because I did well in the past, it doesn’t mean I’m going to do well coming up. I wish it meant that and I hope I can make that happen, but I’m still working hard because I know I still have to prove myself.”

Fantasy football owners despise Mike Shanahan’s running back-by-committee approach. Since you’re obviously part of that committee, what are your thoughts on the subject?

“I don’t see why he wouldn’t do that,” Royster said. “If one person is gonna go out and play well and the ‘starter’ is not doing well at the time, then why would you keep playing the starter if somebody else is playing better?”

Fair enough, but selfish fantasy football owners like me have no clue which one of you guys to go after on our teams …

While we’re chatting, I feel obligated to get your thoughts on everything that’s happened recently at Penn State.

“You know, it’s in the past and there’s nothing I can do about it,” Royster said. “I’m upset, of course. It’s a tough situation and it’s tough to see your alma mater in such a tough spot, but at the same time, there were faults inside that organization. It’s just a difficult situation … I don’t know. I try not to think about it too much. I have a job to do right now, but it’s tough to think about.”

I appreciate you talking about it with me. On a brighter note, what’s it going to take for the Redskins to finally turn the corner and become a consistent competitor in the division, etc.?

“I think we have the tools right now,” he said. “I just think we have to come together as a team and set our goals higher. I think we need to get everyone out here working hard together and work as a unit. Once we get used to each other and we’re playing together like I know we can, I think we’ll be pretty good.”

Along those same lines, do you have individual goals for yourself heading into this season?

“I try not to set too many goals myself because I honestly don’t know how the running back situation is going to unfold,” Royster said. “You know I want to start. I want to play. But you never know what’s going to happen. So I’m just going to go out there and do the best I can.”