getting to know max iafrate 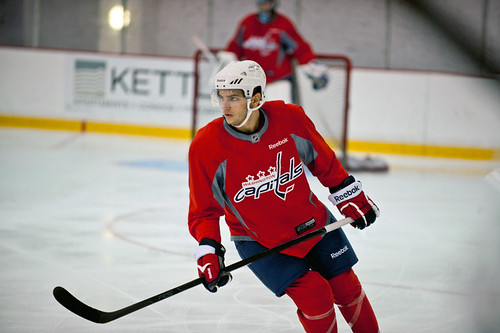 Anyone who has known me for any length of time knows when it comes to the Washington Capitals, my favorite player of all time is defenseman Al Iafrate.

Everything about the guy — from his blistering slapshot to his gloriously balding mullet  — made him almost too good to be true. While he played less than four full seasons in Washington, Iafrate remains a fan favorite with the locals all these years later because of just how uniquely gifted he was.

Needless to say, when I heard that his son, defenseman Max Iafrate, was invited to the Caps Development Camp it was only a matter of time before I tracked the kid down to chat with him. Having interviewed his father a few years ago after a Caps Convention, I was interested to learn more about the next generation of Iafrate.

After spending some time with the kid, I walked away impressed with his quiet confidence. He’s young and has a ways to go before we’ll know for sure whether or not he’s an NHL player, but after chatting with him, it’s tough not to want to pull for the guy.

During his time with the Kitchener Rangers in the Ontario Hockey League, the junior Iafrate has been known as a stay-at-home defenseman. While he doesn’t have a problem with his role on the squad, he was eager to show people there’s more to his game during his time at Caps Development Camp.

“That’s what they asked me to do,” he said. “You’ve got Ryan Murphy [the 12th overall pick in the 2011 NHL Draft] in front of you and the guy puts up 70 points a year, so that was my job. Even if he doesn’t makes the jump to the NHL this year, I think I’ll have an increased offensive role.”

Caps fans who attended the team’s development camp got a glimpse of how many different ways you’re able to contribute. Not only did you drop the gloves twice, but you also showed some offensive flair by jumping up into the play and assisting on Red Team forward Gregory Miller’s overtime winner in a 4-3 come-from-behind victory over the White Team during the final scrimmage of camp.

“Yeah, I’m more confident in my skating and stick handling than maybe I’ve been in the past,” said Iafrate, who is listed at 6-foot tall and 220 lbs. “I’ve been working on getting in better shape because I think the better your conditioning, the more enhanced your skills are. It’s definitely more fun out there when you’re making plays because you’re moving your feet.”

What do you take away from an experience like this?

“It helps get you in really good hockey shape. I learned a lot of new stuff in the weight room and I earned an invite back to the rookie camp if there’s no lockout,” Iafrate said. “So hopefully there’s no lockout and hopefully I can learn even more from there.”

What was it like working with coach Adam Oates?

“We talked a lot,” he said. “If they’re not talking to you, then they don’t really care about you, so it was good. He wants me to switch my curve to Mike Green’s stick. That’s never a bad thing when they want you to use the stick of one of the best offensive defensemen out there.”

When I talked to Iafrate at the conclusion of development camp, he was clearly in a good mood. Between getting invaluable time with an NHL club and doing well enough to earn another trip back to Washington, he was pretty content with everything. The experience had to be even more gratifying considering he was one of the highest-rated prospects in the 2012 NHL Draft who failed to hear his name called.

“I was invited to the combine and when that happens, you usually get drafted,” he said. “I was considered one of the top 100 prospects or whatever going in, but I didn’t get interviewed by that many teams. Once it was over and I didn’t get drafted, I didn’t really take it that hard. I mean, what’s the point of getting down about it. There wasn’t anything I could do about it.

“But right after the draft, my agent called and said the Caps had invited me to camp,” Iafrate continued. “This is one of my favorite teams — especially since my dad’s best years were here. So I was happy to come out here to an organization with so many skilled players. Hopefully they’ll win the Cup soon and I’ll be a part of it.”

Speaking of your father, how much of his playing career do you remember?

“Just his time in San Jose at the tail end of his career,” he said. “I remember being around the rink a little bit towards the end before he retired. But I’ve heard stories about his time with the Capitals. Those were the most fun playing days he had.”

Growing up, how involved was he with you when you decided to start playing hockey?

“Yeah, he taught me all of the skills and the right way to play the game,” Iafrate said. “He was great with the skill stuff, but I think you need a coach to teach you all of the positional stuff. Even though he was in the NHL, I think it’s hard to teach that stuff when you’re not there every day practicing it anymore.”

I want to go back to something you said earlier. I can’t help but chuckle a little bit when I hear you talk about how important conditioning is when your father was famously known for chain smoking in between periods of play.

(Laughs.) “Yeah, he smoked cigarettes, but he was a freak of nature,” he said. “He was 6-foot-4 and 240 lbs. with no body fat on him. He could run like the wind and probably could have played football if he wanted to. He was definitely a freak athlete.”

I interviewed your dad a few years ago and he said if he had the right stick, he could still blast a slapshot like the good old days.That sound about right to you?

“I remember back when I was like eight, he did a segment with TSN where he shot 92 miles per hour just standing there with flip flops on,” he said.

And how does your slapshot compare to your father’s?

“I’ve never got timed, but I know someone got 96 mph in the prospects game,” Iafrate said. “I could probably get 100. But honestly, I don’t think slapshots are used as much these days. Maybe the quarterback of the powerplay gets to tee it up, but goalies are so good now it’s much tougher to score from the point.”

Your father aside, which NHL player do you model your game after?

“I like [Phoenix defenseman] Keith Yandle,” he said. “He’s pretty underrated, but he’s good for 10-12 goals and 40 points a year. He’s an all-around player and we’re about the same size, so I like his game a lot.”

You turned a few heads this week by dropping the gloves. What prompted you to throw down with Brent Tate during the final scrimmage?

“I got a concussion earlier in the year, so I don’t really like getting hit in the head,” Iafrate said. “I mean, it’s not that hard to hit a guy in the head when he’s looking down to get the puck behind the net. It doesn’t really take skill to smoke someone in the head with an elbow. I have respect for guys who can dish out open-ice hits, but not that. After he hit me, I ran him and then he called me out.

“I fought eight times my rookie year and five times last year,” he continued. “It’s part of my game, if I need to. I’ll do it if I need to, but I don’t go out looking for it.”

So where do you go from here?

“I go back to training and then hope there’s no lockout so I can come back out to rookie camp,” he said. “I’d love to eventually earn a contract with the Capitals. They invited me out and gave me a chance, so I’d love to end up here.”

The one thing that stood out during our conversation was the part when Iafrate said Oates told him to switch to a different stick. While the coach didn’t want to talk about the performance of particular players during the camp, I was still curious about his thought process.

“I suggested it — I don’t tell them,” Oates said. “These guys are playing at a high level and they got here for a reason. When I watch guys play and I see something where I feel their tool is letting them down — not their skill level or where they are in the game — if I think it will help them, I’ll present it to them. Video doesn’t lie, and I saw a couple things with him.

“I used Mike’s footage the last couple years in New Jersey showing the D how to corral the puck, move a puck and have the poise back there,” said Oates.

And who knows, maybe changing sticks will be exactly what Iafrate needs to take his game to the next level. If everything works out, then one day he might actually get the chance to play for Oates here in Washington.

If that happens, I’d like to humbly ask that the kid be given No. 34. If for no other reason than to see that name and number taking the ice for the Caps one more time.