catching up with al iafrate 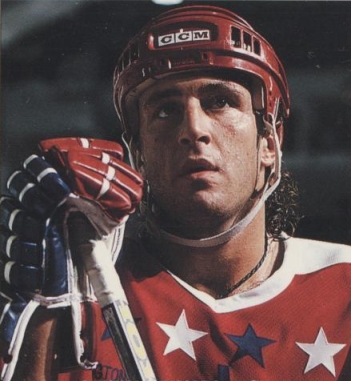 We recently had the pleasure of chatting with one of our favorite childhood players, former Washington Capitals defenseman Al Iafrate. For those not familiar, the man was big and tough, fast as hell and had a slapshot like no other. Oh, and he had a hairstyle that rivaled Barry Melrose. So needless to say, this trip down memory lane was a fun one.

“I work for Warrior Sports in their hockey division,” Iafrate said. “Warrior is a division of New Balance, and I work with some NHL hockey teams on some cheaper business products and do a little bit of sales to the pros with sticks.”

“It’s a company that was founded in the mid-90’s and overtook the lacrosse market. It’s now the biggest lacrosse company in the world. They introduced the hockey division in ’05 and they’ve also got volleyball, field hockey, soccer and others. Warrior is the newest name in your mainstream hockey companies, and it’s grown by leaps and bounds within hockey.”

How does your time with the Washington Capitals stack up against the rest of your lengthy NHL career?

“It was awesome,” he said. “Terry Murray was the coach for 95 percent of when I was there, and [Caps general manager] David Poile and [Capitals president] Dick Patrick were there the whole time I was there. My whole career was unbelievable. I guess there’s only one thing I didn’t do, which was win a Stanley Cup. And a lot of players can say that. Other than that, the individual success was great. But I never got to lift the Holy Grail, which is the only reason I wish I was still playing. I couldn’t imagine anything like it. I can only dream about it.

“Those Caps teams were some of the best teams I played on, but obviously we couldn’t get past Pittsburgh when we needed to and they went on to win two Stanley Cups,” he said. “I just feel fortunate I was born healthy and got to live out my dream for 14 or 15 years there.”

Like you said, you played on some really good Capitals teams back in the early 90’s. Fast forward to today and our nation’s capital is falling in love with hockey all over again now that Alex Ovechkin and friends are here. How’s it feel to see your old team being considered an elite franchise?

“I think it’s great,” Iafrate said. “When I was there, the Redskins were winning Super Bowl after Super Bowl. To see the Caps now, it’s a tribute to the ownership. It’s a tribute to the front office guys there who work the draft, the marketing people and everyone else. They’ve got a great infrastructure there and it translates out onto the ice where they’ve got the highest profile player in the world. They’ve got a very exciting team that is going to challenge for the Cup. I know D.C. can be a tough crowd, so it’s great that they’re the toast of the town. And they should be – they’re very exciting to watch and they have a bright future. I think it’s great, and I think it’s great for hockey.”

You were recently in town for the Capitals Convention. How was it?

“It was a lot like All-Star weekend, with the fanfests that they do,” he said. “It was a great way for the team to give something back to the fans, who could come out and meet the players and see the trophies that players fight for their whole life to try and win. There was a lot of stuff for kids to do. There was plenty of access to current players and guys from the past that everyone loves. Kids can shoot pucks. Kids can stop pucks. It was a pretty festive atmosphere. It was great.”

Your 105.2 mile per hour slapshot is what young hockey players go to bed dreaming of. How the hell were you able to shoot a puck so hard?

(Laughs). “I think it’s a combination of a lot of things,” Iafrate said. “A lot of it is having the product you shoot with dialed in. A lot of it is how fast can you skate, because you want to get a 10 or 15 foot head start into the puck, and then there’s the physics involved – how big you are, how fast you’re moving, the inertia that helps propel the puck – and just knowing how to hit the puck properly. It involves technique and years of practice.

“Everyone always wants to draw similarities between golf and hockey, but when you break it down, shooting a hockey puck and hitting a golf ball are very different,” he said. “If I’ve taken two million shots in my life, my body was never in the same exact position twice. Whether it’s the angle of the play to my skates or whatever, it’s not a static shot. You’re always moving when you hit a hockey puck.”

You’ve been retired for more than a decade. How hard do you think you can fire the puck if you stepped out onto the ice today?

“Everyone always asks me that and I’m a really humble guy,” Iafrate said. “It’s not going to sound like a humble answer, but when you’re in the 99th percentile, it’s really hard to get a good percentage gain. Whether we’re talking about sprinting, or how far you can drive a golf ball or hit a baseball or whatever, it’s hard to get much of an increase.

“I don’t really think I could say how hard I could hit it now because I don’t really play anymore, so I’m not focused on being dialed into my stick,” he said. “So I’ve never had a stick made exactly the way I want it, just for me, just for that shot. But I will say this – they’ve been holding the hardest shot contest since the early 90’s and only three guys have ever really won it consistently. Me – and I will add, I never lost to anyone. (Laughs) – Al MacInnis and Zdeno Chara.

“Chara’s won it four or five times in a row. I won it a bunch of times, and the only time Al didn’t win, was when I beat him,” Iafrate said. “If I wouldn’t have been in it, MacInnis probably would have won it 11 or 12 times.”

So if we put all three of you on the ice, who is walking away with bragging rights?

“Al MacInnis, in a game situation, had the best shot from the blue line ever,’ he said. “Hardest shot contest, if we had to do it today, Chara probably wins. And if we raced one time around the rink, I’d win. I’d be faster than both of them.”

How much fun would it be to play on a team with someone like Ovechkin?

“It’d be great,” Iafrate said. “Hockey, fundamentally, has always been a skating game. It really seems now, with the way they call the games, is tailor-made for the way I played. It’s a speed game, with a lot of puck movement and puck control. I played with a lot of great players over my career, but it’d definitely be fun to play with a guy like Ovechkin.”

Do the Caps have what it takes to make a legitimate run at the Stanley Cup this year?

“Time is going to tell,” he said. “At the end of the year, every team sits down and assesses what they have to do to get to the next level. The Caps lost in a tough seven game series to Pittsburgh, you know, I experienced that. Ultimately, I believe it comes down to teams that can generate an unbelievable offense from a great defense. Teams that win championships – in any sport – typically have great defenses that help generate their offense. The Caps have the makings, now it’s just a matter of putting it all together on the ice.”