trent williams was made to play football 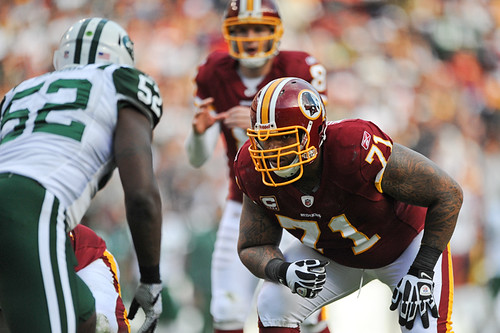 From the minute he took over as the new head coach of the Washington Redskins, it was clear that Mike Shanahan felt the burgundy and gold needed a complete overhaul.

No player signified the dawn of a new day in Shanahan’s first season than tackle Trent Williams. After years (and years) of neglecting the offensive line in favor of bigger-named players who lined up in more glamorous skill positions, the Redskins finally understood the value of landing a franchise cornerstone.

While he’s had some ups and downs during his first two NFL seasons, Williams is still only 23 years old with plenty of football left in him.

And while all eyes will be firmly locked in on rookie quarterback Robert Griffin III, it obviously falls on Williams and the rest of the offensive line to protect the new face of the franchise and buy him time to make plays in his inaugural season.

With that in mind, I caught up with Williams during one of the team’s OTAs to chat about protecting a franchise quarterback, playing against RGIII and what it’s going to take for the Redskins to finally become relevant again. Here’s what he had to say:

“I’m feeling good,” Williams said. “I’m just trying to build team camaraderie and get some team chemistry going because it’s a brand new squad and do what I can to be a part of a championship team.”

When you’re not on the practice field, what have you been up to these days — other than working on that beautiful golf swing of yours?

(Laughs.) You know what … I’ve got half a mind to try and go back and try to at least hit one shot because that was terrible,” he said.

Be honest, you were just trying to show off some of that agility. Why else would you introduce a spin move into a golf swing?

(Still laughing.) “Yeah, I didn’t fall. But it was terrible and I embarrassed myself,” Williams said.

Had you ever actually played golf before or was that the first time you had ever picked up a club?

“You know, I took a couple drives and it wasn’t that bad,” he said. “I actually hit the ball a few times back when I tried a couple years ago. But I hadn’t picked a club up since and the one time when everybody was watching, I do a pirouette.”

Okay, now that we’ve covered that, I’ll let you off the hook. This offseason the Redskins created some buzz by trading a bunch of draft picks for a shot at a legitimate franchise quarterback.

As one of the guys who will be tasked with protecting him, what does it say to you to see the team investing so much into football’s most important position?

“Oh man, it means the world to us,” Williams said. “It lets us know that our front office is willing to do anything to get us to a championship level and the confidence that they have in this team, it manifests itself and grows through the entire organization. Before you know it, we’re one unit working and growing together. Once we get there, we’re gonna be hard to beat.”

I talked to receiver Joshua Morgan not too long ago and he essentially said, “I see why they were willing to give so much to get this guy.” What’s your take on Robert Griffin III so far?

“Absolutely,” he said without hesitation. “I definitely see why. I definitely see why they were willing to do it. I played against Robert back in the Big 12, so I already knew where his talent level was and was excited about the move.”

If I remember correctly though, his Baylor team never beat your Oklahoma squad back when you were there, right?

“No, Baylor never beat us when I was there, but he was still a problem to play against,” Williams said.

What has Griffin shown you since he’s come to town?

“I’ve seen everything,” he said. “He’s humble. He’s poised. He’s willing to learn. All they’ve got to do is tell him something once and he remembers it. He’s like a sponge. He’s soaking up everything that he thinks he needs to get better and he works his butt off. I have nothing but good things to say about him and I’m looking forward to the season.”

An article came out of Cleveland recently claiming they were never really in on the RGIII sweepstakes because he was “too small.” What do you think when you hear something like that and, as an offensive lineman, does that give you extra incentive to keep Griffin’s jersey as clean as possible on Sundays?

“Yeah, we always want to keep our quarterback upright and healthy,” Williams said. “And as far as that goes, I know he’s bigger than Colt McCoy. I know he is, so I’m not sure what they’re talking about. But anyone back there playing quarterback — we’re going to try to protect them and keep them healthy. It just so happens that Robert can run a 4.3 40 [yard dash], so he can keep himself upright and be a headache for opposing defenses.”

How much more of a challenge is it protecting for a guy like Griffin, who is willing and able to move around to make stuff happen, as opposed to a guy like Rex Grossman, who you basically knew was never leaving the pocket until the offense left the field?

“Yeah, but the thing I like about Robert is he doesn’t look to run,” he said. “He’s a pocket passer first, and can run second. His running is basically a bonus. What he does and what made the Redskins give up so much to get him, is stand up in that pocket and deliver the football. That’s what we need and that’s what he brings.”

How have you changed and how has your mindset evolved since your rookie season?

“Basically I figured out I’m not made to do nothing else,” Williams said. “And if football is what I’m going to do, I’m going to do it 110 percent every day. I’m going to come out here and be an example for my teammates by working hard on the field, coaching people up and doing whatever I can do to help this team get back to a championship level.”

Looking across the offensive line — particularly with injuries to guys like your buddy Jammal Brown and Kory Lichtensteiger — it really seems like you guys have got something to prove this season. What say you?

“You know what? There’s always going to be a question mark about something,” he said. “That just makes people keep an edge. No offense,* but that’s the media’s job to find those question marks. We’re used to that. We’ve been hearing it all our life, but Jammal is fine. Kory is 100 percent — he’s just waiting for camp. We’re 100 percent healthy up front.”

More than once you’ve talked about playing at a championship level. What does this team have to do to finally turn the corner and compete with the big boys on a consistent basis?

“We’ve just got to bring that lunch pail to work every day and be ready to work hard. That hard work is what it’s gonna take. There are no shortcuts. But that’s what we need to get what we want.”

Through his first two seasons, Williams has shown flashes of brilliance. But for every time he locks down an elite pass rusher like Dallas’ DeMarcus Ware, there are other times when he struggles with consistency against lesser opponents.

And that’s before we even mention his ill-advised four-game suspension last season that was a result of failed drug tests.

While the weight of the world rests on the shoulders of a rookie quarterback, one could argue that just as much pressure falls on Williams, who is charged with protecting Griffin’s blindside. Because RGIII could be the best quarterback in the world, but it won’t matter if he doesn’t have enough time to make a play.

Fortunately for ‘Skins fans, Williams knows this and isn’t shying away from the challenge. No one knows if the Oklahoma standout can be an elite tackle in this league, but one way or the other, we’re all about to find out.