getting to know joshua morgan 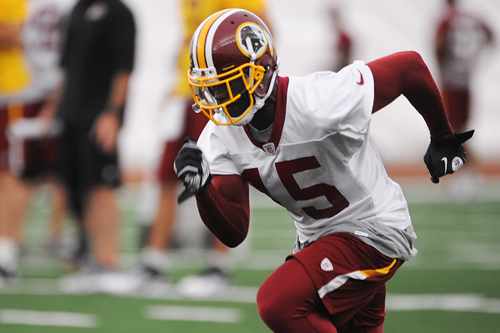 When the Washington Redskins signed San Francisco receiver Joshua Morgan as a free agent back in March, I caught a fair amount of grief from skeptical ‘Skins fans who were convinced I only liked the move because of where he played football in college.

Look, I don’t hide the fact that I’m a Virginia Tech fan. I’ve loved the Hokies for a long time and therefore I’m more than a little familiar with Morgan and what he brings to the table. But this is about more than that.

When I think of Morgan’s time in Blacksburg, I remember him as a dependable receiver who consistently showed up … even in games when his teammates didn’t.

Take, for example, his three catches for 126 yards and two touchdowns against Auburn in the 2005 Sugar Bowl.*

While most Redskins fans remember that game because Jason Campbell was prominently involved, I remember Morgan as one of the few Hokies who came to play on the national stage. He might have only been a freshman, but he was easily Virginia Tech’s best player that game.

Then there was the inaugural ACC Championship Game in ’06, when the fifth-ranked Hokies faced Florida State. For the second-straight season, Virginia Tech came up short during the biggest game on the schedule — but once again Morgan stood out as a playmaker, with seven catches for 128 yards and a touchdown.

Because Morgan spent his college career catching passes from unheralded quarterbacks like Bryan Randall, Sean Glennon and Marcus Vick, his four-year stats aren’t overly impressive. But Morgan is a Hokie I remember fondly because he gave everything he had — even on the nights his team failed to rise to the challenge.

That’s why I was a fan of the signing. Because I don’t expect everyone else who cheers for the Redskins to be well versed on the history of the Hokies, I decided to catch up with Morgan this week for a one-on-one interview.

Before we get started, I want to get to the bottom of something. Should I call you Josh or Joshua? I want to get it right so I don’t upset anyone in your family.

(Laughs) “That came from when I was out in San Francisco because they never really showed our games on the East Coast,” Morgan said. “My grandma felt that since they weren’t going to show our games,  if she was going to read about her grandson in the paper she at least wanted to read the name she gave me. She’s really religious and she named me and all of my brothers biblical names — Joshua, Daniel, Adam, Jacob and Aaron.”

So what happens now that you’re back home and all of your games are going to be televised locally?

“She’s going to be at the games now, so she’s not going to care as much anymore about what people write because she can see me,” Morgan said with a laugh.

After four seasons with the 49ers, you had the chance to test out free agency. By all accounts, you had several teams interested in acquiring you, but you ultimately chose to come back home. How important was it for you to get to play so close to where you grew up?

“That played a huge role,” he said. “Not only being back home and playing in front of my family and friends, but also to be able to play with a quarterback as gifted as Robert Griffin III. I look forward to being able to start fresh with a team that’s going to give me a real chance. The vibe I’ve gotten here so far is the same we had in San Francisco before we turned it around last year. So it’s really an exciting time and it’s a blessing to be back.”

It sounds like you’re excited because you feel like you’re getting in on the ground floor as the Redskins try to become respectable once again. Is that the case?

“Most definitely,” Morgan said. “I’m getting in on the ground floor and I know it’s like that because I really did just go through it out in San Francisco. We had a couple losing seasons and then there was this vibe and a certain energy. The excitement in the locker room right now is exactly the same as what we had there before we turned the corner last year in San Francisco.”

What was your impression of the Redskins as you paid attention to them from a distance?

“Injuries. They’ve had a ton of injuries,” he said. “I’m from here, so I knew the inside scoop anyway, but that’s all it was. They had a ton of injuries and went through a lot of the same stuff we went through in San Francisco — like losing games by three points or less in the last two minutes or a turnover or penalty at the worst time. Those small things are the biggest difference between a winning and losing season.”

What, if anything, did the coaching staff tell you your role would be once you signed with Washington?

“When I first got here, coach [Mike] Shanahan sat me and Pierre [Garcon] down in his office together on day one and said they wanted us to be a major, major part of the offense,” Morgan said. “He said Pierre was going to be the X and I was going to play the Z. I think my biggest part is, when they call my number, I just need to be ready to make the play.

“I need to do everything I can do to help the team win,” he continued. “Whether it’s blocking in the run game, blocking downfield for another receiver after he makes the catch or blocking for the quarterback if he runs with it. If they want me to catch the deep ball, catch the slant or whatever, I’ve got to do to whatever I can to help my team win. That’s what he told me when I first got here and he doesn’t really seem like a coach who is going to lie to me. I mean, I’m home now, so I’ve got to do everything I can to make people proud of me.”

You mentioned Griffin earlier. What have you seen from him so far?

“I see why they did what they did to get him,” Morgan said. “You’re gonna see this season. I can’t say too much, but I can definitely see why they did what they did and I’m happy with the decision I made to come play with a quarterback of this caliber. There’s a lot to be excited about with this team, and like I said, I’m just glad I’m here and can’t wait to hit the ground running. I’m just happy to be a part of it all because it’s going to be an exciting year — especially if we can stay healthy. We’ve got a great coaching staff. We’ve got the players. We picked up smart free agents. We had a great draft too, so it’s an exciting time.”