getting to know jarvis jenkins (again) 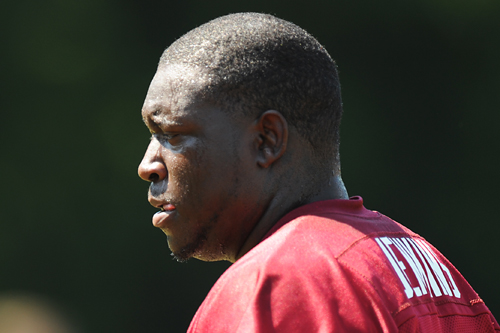 Usually when I do a “getting to know” feature on a local player, it’s someone who has just come to town as a rookie or free agent.

But in the case of Washington Redskins defensive end Jarvis Jenkins, I decided to make an exception because — in his own words — the second-year pro feels like he’s starting over after missing the 2011 season due to a knee injury suffered during the preseason.

It was a shame too, because for as good as first-round pick Ryan Kerrigan looked during his inaugural campaign, Jenkins looked better during training camp last year.

By the time the preseason rolled around, some ‘Skins fans were beginning to openly wonder if the franchise had landed a steal with the 41st overall pick in the 2011 NFL Draft as the Clemson standout continued to look the part.

Unfortunately, shortly after defensive coordinator Jim Haslett declared Jenkins was having the most impressive training camp of any Redskins lineman, his season was over before it ever truly got started thanks to a torn ACL.

With that in mind, I caught up with Jenkins to see how everything was coming along with the injury and to …

“I’m feeling pretty good. I just need to get back into football shape and get the concept of our gameplan down pat and I’ll be good to go,” Jenkins said.

Just how tough was it to have a productive training camp and start to the preseason, only to have everything taken away from you before you ever got to step onto the field for your first regular season game with the Redskins?

“It was hard having to sit down and watch my teammates play without me, but after I sat down and analyzed everything, I knew I just needed to get healthy first,” he said. “I just took it one day at a time because I realized it would be a minute while I was out, but now I’m happy to be back here with my teammates.”

When you were forced out of the lineup like that, were you still able to come around Redskins Park to break down the film and everything else that the guys were going through?

“Most definitely,” Jenkins said. “While I was hurt, I was still going to meetings and trying to learn from the mistakes that other defensive linemen were making during the season. I still remember what I learned last year, so I’m out here trying not to make those same types of mistakes while I’m playing ball.

“Obviously if I was with the team last year, we could have had more depth,” he continued. “But I got hurt and some guys stepped up and made plays. Now we’ve got a lot of depth and we can just play ball.”

From last year to this year, how different is your mindset? I mean, coming in you’re a rookie and you’re head is spinning as you try to transition to the pros, but now you’re starting your second season without actually having played your rookie one.

“When you’re out of football for eight months — not really on the field playing — it’s going to take a little bit of time to get back into it,” Jenkins said. “Right now I’m focusing more on getting in football shape, playing constant plays back-to-back and learning not to make mistakes when I’m tired. Last year was my first time getting hurt and not playing, so it’s good to be out here playing.”

Do you feel like this is almost like going through your rookie season all over again since you didn’t ever truly get a chance to show the world what you’re made of?

“Honestly, it’s like having another rookie season,” Jenkins said. “I played three games*, but that’s not enough. I didn’t get the gristle of the full NFL season. In the preseason, they’re just seeing how guys react and they’re bringing in other guys to see how they handle certain situations. But when you’re in the regular season, that’s when it really counts and I haven’t really experienced that yet.”

*To be clear, Jenkins played in three preseason games before tearing his ACL against Baltimore. He didn’t actually play any regular season games.

Has Coach Haslett or anyone else told you what they envision your role being this season?

How exciting is it to head into a season where it looks like the offense might actually be capable of putting points on the board on a consistent basis?

“If our offense gets rolling and we’re holding people to three-and-out and getting them the ball back, that’s only going to make our team better,” he said. “That will give us a chance to win more games.”

At 6-foot-4 and 309 lbs., Jenkins easily has a chance to be a difference maker on this defense. Add in just how NFL-ready the 24-year-old appeared heading into last season and it would be easy for the coaching staff to want to rush Jenkins back into action.

Thankfully, that’s not the case.

“We’ve been working the heck out of Jarvis to see if he’s in football shape,” said head coach Mike Shanahan. “He’s got a little brace on his knee, but he’s been taking all the reps and doing extremely well, so hopefully there’s no setback.”

There’s plenty of time between now and Washington’s season opener against New Orleans, and honestly, for as good as Jenkins looked during training camp last year, he was a non-factor once the season actually began. So I’d much rather see the team take their time with a guy like Jenkins and proceed with caution rather than try to rush him back too early.