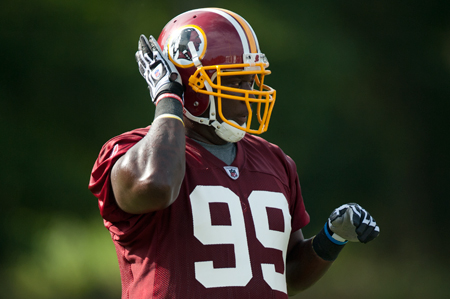 For far too long, the Washington Redskins were perfectly content to try and buy a championship with overpriced free agents while seemingly blowing off the NFL Draft completely.

While the league’s top teams are routinely able to churn out young talent, Washington’s “brain trust” seemed to believe the only way to use a draft pick was packaging it for a past-his-prime veteran.

Selling jerseys was always more important than building depth with previous regimes at Redskins Park, so the Redskins were always left with top-heavy rosters that looked much better on paper than on the playing field.

Thankfully, those days appear to be gone.

Head coach Mike Shanahan might not be perfect,* but at least the front office now realizes that putting time and energy into the draft can be a worthwhile investment.

*That, my friend, is an understatement. Sure, Shanahan has two Super Bowl trophies on his resume, but he mishandled the situations involving disgruntled defensive lineman Albert Haynesworth and quarterback Donovan McNabb last season about as poorly as possible.

Instead of walking away with just four or five rookies on draft day as has been the case in years past, the Redskins selected 12 players in 2011.

And while first rounder Ryan Kerrigan has yet to see much action thus far thanks to a knee injury, the next three rookies Washington drafted have already started gaining attention for all the right reasons.

Running back Roy Helu (fourth round) might very well be the team’s next franchise running back. Receiver Leonard Hankerson (third round) seems poised to become the team’s next impact player to come out of the University of Miami. And yet, the player who has stood out the most since the lockout ended* is defensive end Jarvis Jenkins (second round).

*As opposed to quarterback John Beck, who seems only capable of making headlines when there is no football to be played.

Jenkins hasn’t even stepped onto the field for his first preseason game and he’s already got his coaching staff excited about his future.

“I like him,” Shanahan said last week. “He’s quite impressive. At 320 pounds, he can play the run and he can play the pass. He’s got a big upside. You can tell he likes to work. All the things that you look for in a guy, I believe he has.”

Shanahan would have said more about the Clemson product, but he admitted he didn’t want to “jinx” Jenkins’s progress.

I caught up with Jenkins over the weekend to see what this guy is all about. Here’s what he had to say.

Okay, I’ve seen more words written about you since training camp started than any other player on the roster. Seriously, what’s going on here?

(Laughs.) “Man, I’m just coming in and working hard,” said Jenkins, who was selected 41st overall in the 2011 draft. “You know, I’m a rookie, but I can’t play like a rookie. I’ve got to come in and show these boys that I’m here to play. I’m very serious about coming in and making this Redskins team better.”

Fair enough, but this isn’t a typical rookie offseason. You didn’t have OTAs. You didn’t have minicamp. You just showed up for your first training camp and even though most rookies in your position would have their heads spinning, you’re out here making plays. Explain yourself, man.

“What can I say? I’m a quick learner, I guess,” he said. “I’m not sure I could have made it to OTAs anyway because I was trying to get as close to finishing my degree as possible, so once I got here I’ve done my studying and I’ve paid attention to the technical details so I can improve my game. I’m just trying to make myself better.”

Can you tell me a little bit about your time at Clemson for those Redskins fans who might not be familiar with your game and what skill set you bring to the table?

“Well, at Clemson I was a 100 percent run stopper,” Jenkins said. “I did good against the pass, but I was mainly used as a run stopper. I would take on double teams and do whatever I could to help make our defense better.”

You’re an interesting story because I remember some so-called experts saying the Redskins might have reached and drafted you too early and yet, here we are, roughly a week into your first training camp and now everyone’s raving about you. That’s a pretty quick turnaround, huh?

“That’s my motivation – to prove people wrong,” he said. “I was the 41st pick and I’ve got to play like the 41st pick. I’ve got a point to prove because I feel like I honestly should have been picked higher than that. In my mind, I should play like the number one pick. I’m out here to prove something every day.”

What did you know about the Redskins before you got the call on draft day and found out they were selecting you?

“Well, I knew they ran a 3-4 defense and I knew they wanted big bodies on the end,” Jenkins said. “So when they called me, I kinda knew what they wanted me to do in this defense. I know they brought me here to help stop the run, so that’s the main thing I’ve got to do this year.”

When it comes to the defensive line, most everyone who was on the roster a year ago is elsewhere. So the opportunity is definitely there for a young guy like yourself, right?

“Like I said, I’m just trying to come in and contribute the best way I can,” he said. “I just want to get on that field. If it happens that I can’t start, then I’m just going to take on whatever role they give me and make the most of it.”

If not for a porous offensive line last season, Washington’s defensive line would have been the most glaring need heading into 2011. Thankfully, the coaching staff agrees – and they’ve made it a top priority to improve the team’s front seven.

The new guys on the defensive line – which includes Barry Cofield, Stephen Bowen and Jenkins – will have ample opportunity to shine early and often.

While Jenkins is the only one of the three who is a rookie, he’s certainly doesn’t play like it. That’s why, as the Redskins prepare to face the Pittsburgh Steelers in their preseason opener, there isn’t a player on the roster I’m more excited to see in action than Jenkins.*

*Even if he’s a Clemson guy.