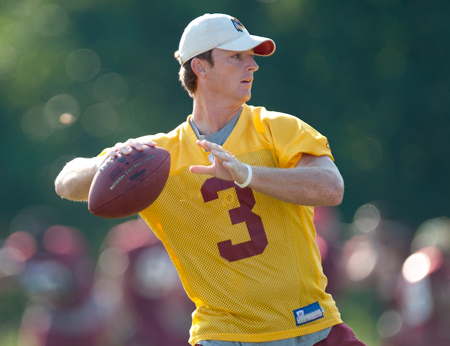 Now that the collective bargaining agreement has been ratified and football is back for another decade, it’s time to take a look back at the first full week of training camp for the Washington Redskins.

And since ‘Skins fans seemed to enjoy this exercise last year, I once again present to you my take at the top 10 Redskins players through Week 1. For those who aren’t familiar, these are the players who have risen to the challenge and made a strong impression through the first seven days of camp.

1. Jarvis Jenkins, defensive end – No Redskins player has received more praise this week and deservedly so. Defensive coordinator Jim Haslett calls Jenkins an “ideal fit” for this 3-4 scheme and the Clemson product has continued to impress every chance he’s been given. Out of all of the new guys, I’m most excited to see what he can do in his first preseason action.

2. Trent Williams, left tackle – While Jenkins has routinely taken the lunch money of whoever he’s lined up against during 1-on-1 drills, Williams has been the standout on the offensive side of the ball. Even when the defense tries to overload his side, Williams has looked at ease sealing off the blind side.

3. DeAngelo Hall, cornerback – No way around it – the guy has a nose for the ball. At least once a practice, Hall’s instincts will kick in, he’ll jump a route and take off in the other direction with a timely interception. You know it’s bad when he’s got the ball in his hands more often than some of the receivers in the lineup.

4. Leonard Hankerson, receiver – While the quarterback position continues to be Washington’s biggest question mark heading into the season, Hankerson is hoping to provide whoever ends up with the job a sure-handed target in the middle of the field. One week into his professional career and that’s exactly what he’s done.

5. Lorenzo Alexander, linebacker – There’s not much else I can say about Alexander, the man his teammates lovingly refer to as “The One Man Gang,” because of his amazing versatility. A guy who once played on the offensive line is now ready and willing to play either inside or outside linebacker. The Redskins are clearly lucky to have an ultimate team player like Alexander.

6. Jabar Gaffney, receiver – Upon seeing Gaffney practice once, Peter King boldly declared that he’ll finish the 2011 season with 76 catches. That’s a bold prediction, considering only two Redskins receivers – Santana Moss and Lavernues Coles – have posted as many catches during a season since 1990.

7. Anthony Bryant, defensive tackle – The most unheralded defensive lineman from a year ago seems to be in the same boat again this season. That being said, he continues to do well in 1-on-1 drills and let’s be honest – offensive linemen can’t be thrilled to see this massive 6-foot- 3 and 376 lb. man barreling towards them.

8. Will Montgomery, center – Coaches have enough confidence in Montgomery, who moves to a new position this season, that they were willing to release veteran Casey Rabach. And while Adam Carriker and Phillip Daniels have spent the last year or so bickering who is the strongest Redskin, Montgomery is the guy who strength and conditioning coach Ray Wright gives his vote to.

9. Roy Helu, running back – It’s impossibly difficult to judge how well a running back is performing when teams are practicing without pads, so take this with a grain of salt. But the Nebraska rookie makes the list because he’s got one thing over the rest of the running backs in the rotation – he’s a bona fide home run threat.

10. John Beck, quarterback – Look, I’m not really sure how much confidence the rest of his teammates have in Beck. But head coach Mike Shanahan says the only people criticizing Beck are the people who don’t watch the film, so I’ll defer to the two-time Super Bowl winner until the chosen one plays against a defense wearing something other than burgundy and gold.

Honorable mention: Darrel Young, fullback – For a guy who started his career as a linebacker, Young seems to be right at home on the offensive side of the game.

On the flip side, here are five players who need to step up their game sooner rather than later:

5. Graham Gano, kicker – In a perfect world, Gano would step up and lock down the kicking job for the next decade or so. But the 24-year-old has been inconsistent enough during his time in Washington that Shanahan felt compelled to bring in 33-year-old Shayne Graham.

4. Ryan Kerrigan, linebacker – Hard to evaluate the rookie when he’s standing on the sideline.

2. Mike Sellers, fullback – It’s never a good sign when the coaches decide to move a former Pro Bowler from his natural position at fullback to tight end – especially when that’s one of the only positions of strength on the entire roster. I get the feeling if Sellers wasn’t so good at special teams, he’d already be looking for a new job.

1. Malcolm Kelly, receiver – At this point, it’d be nothing short of a miracle if the injury-prone wide out made the 53-man roster.