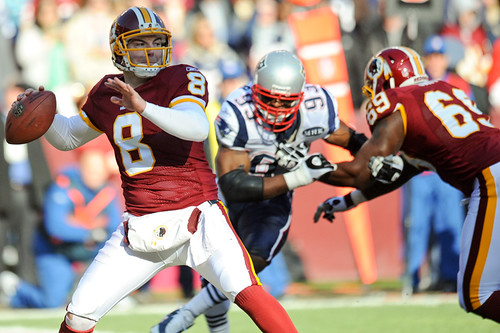 For most of his five seasons with the Washington Redskins, defensive end Andre Carter was a focal point of the defense. And with 34 sacks in 67 starts, he was also one of the most productive members of the burgundy and gold during his time in Washington.

But when head coach Mike Shanahan came to town, he decided to switch the defense to a 3-4 scheme and Carter — who has always been much better at rushing the passer as opposed to dropping back in coverage as a linebacker — no longer fit into Washington’s long-term plans.

Rather than going through a long and drawn out divorce, the player and the team were able to end things without hurting anyone’s feelings with Carter moving on to New England and the Redskins drafting Purdue’s Ryan Kerrigan. For once in life, everything really did work out well for everyone involved.

That being said, Carter did have the unique opportunity to play against his former employer this past season and since I enjoy catching up with the 11-year pro whenever possible, I tracked him down to ask what it was like to play against the Redskins and what players, if any, stood out from Washington’s offense. Here’s what he had to say about everything.

“It wasn’t that the team didn’t want me anymore. It was the fact that I knew they were going to go in a different direction and moving to a different scheme that I didn’t feel like I fit in with,” Carter said. “I just felt it was in my best interests to part ways and they respected that, so we did. But then going out and playing against a team I played on for five years — of course it felt different.

“When I stepped out onto FedEx Field I couldn’t help but reminisce about the good times I had there and my boys on those teams, like Sean Taylor, Phil Daniels, Renaldo Wynn, Joe Salavea, Cornelius Griffin, crazy old Marcus Washington, London Fletcher and everyone else,” he continued. “It was a fun ride, but when the whistle blows it was all about business. I just went out there and prepared to play my best game possible.”

I’m interested in getting a peak into the mindset of an opposing player preparing to take on the Redskins. What stood out — good or bad — when you watched film during the week leading up to your game against Washington?

When a defense was able to take away the Redskins’ run game that put the ball in the hand of Rex Grossman, who never met a turnover he didn’t like to commit. So yeah, I can see why you’d rather have the offense rest on his shoulders rather than letting Helu run wild on you. What’s the scouting report on a guy like Grossman?

“Despite the turnovers, you’ve got to look at everything else he can bring to the table,” he said. “I try to overlook stuff like that and prepare for how he can beat you. Rex has had some very effective games over the years. He can move the ball well, has a good arm and isn’t afraid to throw the deep ball to a guy like Santana Moss or whoever is out there. “

All that is fine and I know you don’t like to bad mouth anyone, but be honest — when you’re playing against a guy who is careless with the football, you’re going to target his arm or whatever to try and cause a fumble, right? I mean, right off the bat you caused a turnover in that game that led to a Vince Wilfork touchdown roughly three minutes into the game.

“Of course, but that’s a technique I’ve tried to implement for years,” Carter said. “That’s not just because I’m playing Rex or someone else. It’s something pass rushers practice day in and day out. It doesn’t matter if a guy is careless with the football or not, that’s just a philosophy I have. I’m trying to get that ball out when I rush the passer regardless of who I’m playing against.”

And that play really was a best-case scenario for you, with you knocking it free and then someone else scooping it up for the score, right? I mean, I remember just how bad you were at trying to “cradle the baby” back in the day …

(Laughs.) “At first I didn’t know who got the touchdown, but I was very happy to see Vince with it,” he said. “And he was happy too. Vince was holding that football like it was a honey-baked ham or something.”

You mentioned Santana Moss earlier. It really looked like the gameplan for playing against him was to be as physical as possible in hopes of throwing off the timing on his routes and/or frustrating Moss into making mistakes. Am I wrong or was that how you guys tried to play him?

“That’s something we tried to do to receivers in general throughout the year,” Carter said. “Because we had so many injuries in our secondary throughout the year, so it was very important in our coverage that we get a good jam at the line and get a hand of him to try and throw guys off. Santana had a pretty good game against us and had that one big catch against us, but we definitely thought it was important to get physical with him and get him off his game.”

Other than Helu, who on the offense garnered the most attention?

“Fred Davis is definitely a player you need to know where he’s at on the field at all times,” he said. “Every week, despite what the score was, he was killing opponents. He had a great season despite the little hiccup he had towards the end with the suspension. I’m happy for how he’s developed as a player though. From when he came in as a rookie until now he’s made so many great strides.”

As you know, the Redskins made a bold move to acquire Heisman Trophy winning quarterback Robert Griffin III. What do you know about the kid?

“I’ve seen some highlights of him last year and he definitely looks legit,” Carter said. “He looks like he’s gonna be a great player. I just think he’s a phenomenal athlete who clearly has that winning edge, so if he can continue his development — especially with some of the weapons you guys have signed — there’s no reason you guys can’t contend in the NFC East. But like any other player, he’s got to pay his dues day in and day out. Nothing is given to you in this league. You’ve got to earn every single play in this business.”