can joel ward be the breakout star? 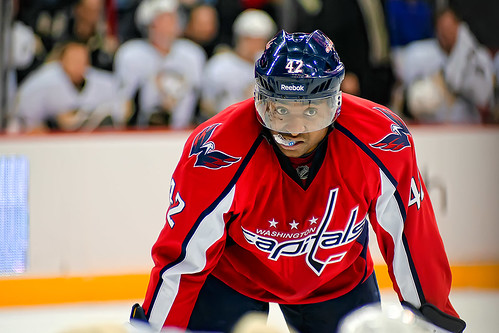 The Washington Capitals haven’t even started their opening round series against the Boston Bruins yet and it already feels like all of the storylines have been beaten into the ground.

Let’s see, the top storyline coming out of Boston is, “Why does Tim Thomas hate America?”

Locally, the only question anyone is asking is, “Can Braden Holtby handle the pressure?”

And from a big-picture perspective (i.e. – the lazy national media), the only topic of conversation is “How many games will it take the defending Stanley Cup champs to send the underachieving Capitals packing?”

That about covers it, huh?

Well, rather than regurgitating those same tired subplots, I opted to focus my attention on the 1989-90 Capitals, and specifically an unheralded forward by the name of John Druce who enjoyed the hottest postseason streak in Washington’s franchise history.

Just a few short months after Holtby was born, the 24-year-old went on a tear that enabled the Caps to go deeper into the playoffs than ever before.

After scoring just 11 points in 45 regular season games, the second-year player racked up 17 points in 15 playoff games. For one magical postseason, Druce was the epitome of clutch.

Now, while it’s enjoyable to pause and think back to better days, that’s not the point of this exercise. Instead, I wanted to try and see if there might be someone on the roster capable of stepping up and carrying this team on his back the way Druce did more than two decades ago.

Simply put – who is the likeliest candidate to be this year’s John Druce?

Well, it won’t be captain Alex Ovechkin, that’s for sure.

With 25 goals and 25 assists for 50 points in just 37 career playoff games, Ovechkin has been too solid in the postseason to sneak up on anybody. In fact, he’s picked up double digit points in each of the last three years and has never scored less than nine points in a playoff run.

It won’t be forward/enigma Alexander Semin either. Although he’s known as one of the streakier players in Washington, his postseason production (12 goals and 18 assists for 30 points in 37 games) knocks him out of consideration as well.

But for my money, if general manager George McPhee could handpick this year’s breakout playoff performer, it would be forward Joel Ward.

Much like Druce, Ward’s regular season production was nothing to write home about (six goals and 12 assists for 18 points in 73 games).

And really, Ward showed a glimpse of being able to elevate his game in the playoffs one year ago when he went from 29 points in 80 regular season games with Nashville to 13 points in 12 postseason games.

That outburst, in all honesty, is why Ward was signed to a four-year- $12-million contract.

“I’d rather have someone that gets 10-15 [goals] in the regular season but delivers in the playoffs than someone who gets 25 and doesn’t,” McPhee said after the signing.

With that in mind, I caught up with Ward to see if he was ready and able to once again take the postseason by storm.

“Obviously, on the ice we’d like to have had a few more wins and I’d like to have contributed more, but I’m definitely upbeat and looking to play some more games here,” Ward said.

Anyone who has spoken with Ward knows he’s a pretty positive person by nature, and while he obviously didn’t have the type of statistical production he hoped for (with just one assist in his last 12 games), he still did his part to try and help the team when things got rough.

“You try to tell the younger guys that it’s a long season and to not stress out,” he said. “Just relax, keep playing your game and stay within yourself and we felt like we’d be alright. As long as everyone’s doing their job and paying attention to the details, we felt like we’d be able to have some success.”

And how would Ward describe his style of play to those who aren’t overly familiar with his body of work?

“I’m just someone who enjoys playing sound hockey on both ends of the ice,” Ward said. “I try to contribute offensively when I can and try to get on the forecheck and create turnovers whenever my line is on the ice.”

What does it take to be successful in the postseason?

“You’ve just got to stay in focus with the task at hand,” he said. “You know in the playoffs there’s gonna be lots of ups and downs, so you’ve just got to take it shift by shift as cliché as it sounds. But that’s what you literally have to do to keep yourself from getting too excited out there.”

Rather than focusing on an obscure player such as John Druce though, Ward admitted there was another former Caps player who he could learn a lot from.

“I definitely watched a few games of his and watched his style of play,” Ward said of Hunter. “He brought it every night, was very consistent and played hard. He was a great team guy, so I’m sure some of us are going to try and fill that role and just try to work hard and be consistent every single night.”

Will Ward, who missed seven of the team’s final eight regular season games due to injury, see enough playing time to be a factor against Boston? With the way Hunter’s shuffling of lines has gone this year, it’s a valid question.

But jumping back to McPhee’s comments the day Ward was signed, you’d have to think the 31-year-old will be given a shot this postseason. If so, he’s my best guess at identifying which under-the-radar player could be the team’s breakout star this postseason.

Here’s hoping he makes me look smart, because lord knows I could use all the help I can get.