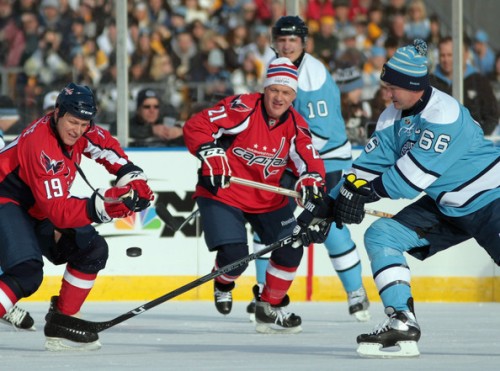 Once upon a time, the Washington Capitals were the epitome of a blue-collar team. Without the benefit of big-name stars, they were forced to hustle and grind their way through each and every season.

While they occasionally boasted a few talented players along the lines of Dino Ciccarelli, Scott Stevens or Rod Langway, unheralded guys such as Mike Ridley, Michal Pivonka and Kelly Miller logged plenty of ice time for the underdog Capitals.

For the purpose of this story, I’d like to take us back to the magical 1989-90 season. Now remember, these were the days of Sinead O’Connor, Vanilla Ice and MC Hammer in the music world while hits like Ghost, Home Alone and Pretty Woman owned the box office.

Imagine a time when only five out of 21 teams fail to qualify for the postseason, meaning you have to be fairly inept to miss out on the playoffs – which explains how the Capitals were able to advance to the postseason despite the fact that they went just 36-38-6 during the regular season.

That year, Washington finished with the seventh most points in the Prince of Wales Conference and earned a shot at 21-year-old Brendan Shanahan and the New Jersey Devils in the opening round of the playoffs.

Thanks to balanced scoring and solid play in net from goalie Don Beaupre, the Caps defeated the Devils four games to one, which earned them a second-round matchup with the New York Rangers.

While most local hockey fans would have expected someone like Dale Hunter, Geoff Courtnall or Ciccarelli to elevate their game in the postseason, Washington benefited from timely scoring from the unlikeliest of sources.

Seemingly overnight, a 24-year-old winger by the name of John Druce caught fire and went from a virtual afterthought to one of the league’s most lethal snipers.

For those of you too young to remember the 1989-90 season, Druce’s transformation is what Disney movies are made of.

And yet, once the playoffs started, the second-round pick elevated his game to a point where Caps fans had to wonder if the team had somehow smuggled Wayne Gretzky into the lineup.

In the first round, Druce scored three goals in six games against New Jersey. While it was an improvement over his regular season scoring pace, his performance was still under the radar.

But things changed in a hurry during the second round, when Druce had a hat trick in the second game against the Rangers. The youngster followed that up with two goals and two assists the following game and two more tallies in Game 4.

In Game 5, Druce wrapped things up by scoring the series-clinching goal in Washington’s 2-1 win to eliminate New York and advance to the conference finals for the first time in franchise history.

When it was all said and done, Druce had scored nine goals in five games against New York. Seriously, read that sentence one more time – the man scored nine times in a single series.

That kind of offensive output from anyone is remarkable. But for it to come from a guy with just 16 goals in his first two NHL seasons was simply unfathomable.*

*Seriously, Druce finished the regular season in 17th place on the Capitals in scoring. I repeat, 16 of his teammates had more points than he did that season.

Through two rounds of playoff action, Druce led the league in game-winning goals with four and was tied with future Hall of Famer Brett Hull in total goals with 12 and powerplay goals with six.

“John Druce was not on the top of my list – anybody’s list – to come through the way he did,” said general manager David Poile after the Rangers series. “He came out of nowhere to be the hero.”

Sadly, the Capitals were swept by the Boston Bruins in the conference finals, but that’s not the point.

My point is: one player was able to elevate his game when his team needed him most and suddenly a decidedly mediocre squad was taking the league by storm as they went on a run that absolutely no one saw coming.

Consider this: those Washington Capitals didn’t even qualify for the playoffs until the final week of the regular season. There was a midseason coaching change, as Bryan Murray was fired and replaced by his brother, Terry.

The seventh-seeded Caps even had to deal with an injury to their top scorer, Ciccarelli, during the postseason and yet, were still able to play deep into the Stanley Cup playoffs.

Suddenly, a team widely regarded as a regular season powerhouse that consistently faltered in the playoffs boasted the league’s most talked about player and had everyone wondering just how long the magical ride would last.

The moral of this story is that the reason so many people love sports is because of the completely unpredictable nature of things.

I couldn’t help but think back to those Capitals as I watched this year’s team stumble and fumble their way through the regular season – especially as they enter the playoffs as a seventh seed against the defending Stanley Cup champions.

The 1989-90 Caps were a team that was easy to write off heading into the playoffs, and yet, thanks to Druce’s 14 goals in 15 playoff games, the Capitals were able to advance deep into the playoffs and put together one of the most memorable postseason runs in franchise history.

I’m not saying this year’s team is a lock to final end the recent string of playoff disappointments. I’m simply saying that the reason we all tune in is because just when you think that all hope is lost, a player like John Druce comes along and makes it all better.

[Editor’s note: Because the internet is an awesome place, I just stumbled across this video of the ’89-90 Caps performing a song called “More than a Team.” Words cannot describe how amazing it truly is, so click the link already.]