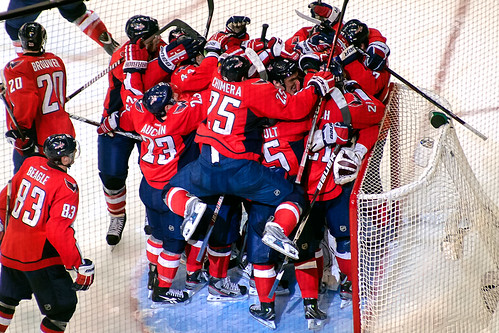 Hours before the Washington Capitals took to the ice in a game that ultimately clinched a playoff birth, I asked forward Mike Knuble the simplest of questions.

With all of the drama and the highs and lows this team has faced during the 2011-12 season, I wanted to know if the veteran grinder was still having fun playing hockey.

“Yes, as a player, I do still think hockey is fun,” Knuble said. “Especially with the day-to-day drama and just how much things seem to change across the league on a daily basis — you’ve got coaches bickering in Philly and Pittsburgh, you see players going back and forth with each other through the media. There’s a little bit of everything going on right now, so it’s a fun time of year.”

Because the Capitals had an issue or two down the stretch trying to lock down a playoff spot, I asked Knuble how much scoreboard watching he’s found himself doing recently.

“During this last little bit I’ve been doing it a lot more,” he said. “During the early part of the regular season, I didn’t do it at all. I’ve got the hockey package on cable and I don’t think I’ve watched it too much. But in the last week or so I’ve been watching a lot more.”

At this point, I suggested that Washington hasn’t done all that well in “must-win” games — and specifically cited disappointing losses to Buffalo and Winnipeg as games the team “needed” to win, but was unable to do so.

“We feel like we’ve been playing ‘must-win’ games for the last 30 games,” Knuble said.

Clearly I struck a nerve with this question because at that point, forward Jason Chimera, who had been quietly getting out of his pads nearby, leaned over and added, “And we’ve won a majority of them.”

That being said, Knuble understood where I was coming from and admitted that the time for this team to let of the gas or fall asleep at the wheel has come and gone.

“The reality is you’re getting down to the last two here and everybody knows the deal,” he said. “Nobody needs to call them anything special because everybody sees the writing on the wall. We just need to go out and win some games.”

What struck me as we chatted was the demeanor of Knuble and the rest of the players in the locker room.

Everyone was completely at ease. No one looked to be burdened with the pressure of facing the Florida Panthers with so much on the line. Simply put, there was way more joking and laughing between the players than I’d seen at any other point this season.

Maybe the guys in the locker room really did believe that they’d already clinched a playoff spot, because they were definitely acting like the care-free bunch that this town has come to know and love.

By the time the puck dropped, it almost wasn’t fair for the Panthers.

This wasn’t the team that Karl Alzner openly admits overlooks opponents from time to time. This wasn’t the squad who has been known to look disinterested or vanish during key moments of games.

No, the Caps came out and immediately looked like a team who absolutely wanted to set the tone early. The grinders like Troy Brouwer, Matt Hendricks and Jay Beagle were happily throwing their bodies around and punishing any opposing players who made the mistake of stepping out onto the ice at the same time they did.

So it was only fitting that their hard work and determination was rewarded when Beagle scored roughly six minutes into the contest to give the Caps a 1-0 lead. Again, if the players were having trouble dealing with the heightened pressure of the situation, they were doing a great job of hiding it.

Fast forward to halfway through the second period and Washington absolutely seized control of this game with back-to-back goals by captain Alex Ovechkin and handsome/forward Brooks Laich.

These two goals were absolutely vital for the home team because goalie Michal Neuvirth was knocked out of the game just minutes earlier when former Caps forward Marco Sturm fell awkwardly on the young goaltender.

Through 25 minutes, Neuvirth had things completely under control — stopping all 13 shots he faced with ease as he looked up to the challenge of backstopping the Capitals for a potential playoff run.

And just like that Neuvirth joins Tomas Vokoun on the injury list and an already vulnerable Caps team was now in the hands of a 22-year-old who has played in just 20 career NHL games.

I am a huge fan of Braden Holtby and hope to see the day when he locks down the starting gig here in Washington. But being thrown into the fire under less than ideal circumstances wasn’t exactly how I envisioned things playing out.

And honestly, Holtby struggled, at times, against Florida. While Neuvirth sat back and let the play come to him, Holtby appeared to be fight the puck more. He looked a little uptight and unsure of himself as the Panthers turned up the pressure on him.

By the time they cut the lead to 3-2, more than a few Caps fans in my section began to openly cringe and cover their eyes whenever a shot was fired at the Washington net.

Thankfully, the Capitals were able to hold on and even added an insurance goal by Alexander Semin in the final minutes of the game to ensure that a monumental collapse was avoided. And best of all, Knuble was right — hockey was fun once again.

The fans were fired up all game long. The players were throwing their bodies around and diving in front of pucks to block shots. Basically, for one night at least, the Caps looked like a team more than willing and able to win the type of game that is a staple of the Stanley Cup playoffs.

They weren’t overly concerned with being to cutesy or trying to skate through three defenders. Instead, the Capitals simply outworked and out-hustled an opponent that — just like them — had everything to play for.

It was absolutely a sight for sore eyes and hopefully is a sign of things to come.

Finally, I want to send a special note to a junior Caps fan named Aidan, who attended his first-ever game last night. He promised me the Caps were going to win and predicted the final score was going to be 3-2.

Clearly, he knows more about this team than I do, so thanks to Aidan and his dad for hanging out with me before the game and reminding me just how much fun a night at the hockey rink can be. Sometimes we all need a reminder like that.

[Editor’s note: For those who missed it, I was on the radio once again last night with LaVar Arrington and Chad Dukes on 106.7 The Fan. They were broadcasting live from the Verizon Center and had me on just before the Caps-Panthers game kicked off. Here’s the audio for those who missed it.]