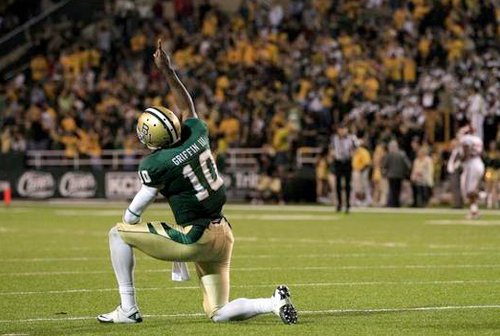 As you’ve no doubt heard by now, the Washington Redskins did the unthinkable — trading away anything and everything to the St. Louis Rams for the chance to land the most electrifying player in this year’s draft.

Rather than settling for lesser talent like Kyle Orton, Ryan Tannehill or whatever other lackluster options were out there, the Redskins parted ways with first-rounders in 2012, 2013 and 2014, as well as a second-rounder in 2012 for the chance to draft Baylor quarterback Robert Griffin III and they aren’t looking back.

Anyone who heard my appearance on the LaVar Arrington Show with Chad Dukes last Thursday obviously knows my stance on the subject. For those who missed it, here’s how I ended the segment:

“You can’t win the division, let alone be a contender in the NFC East without solidifying the quarterback position. With that in mind, can you really skimp or settle or talk yourself into Orton or Tannehill because you didn’t want to pay the price for the one guy who looks like a legitimate franchise quarterback? I don’t think this is the time to play it safe and sit on your cards. I think this is the time to put your chips in the middle and go all in.”

Clearly, the current regime heard my take and it was enough to convince them to make one of the boldest moves in franchise history. (Or at least that’s what I’m telling myself.)

While nearly everyone I’ve heard from since the trade went down has been ecstatic, there are a few skeptical fans out there who aren’t thrilled with the move. Just last week I wrote something tackling the most common arguments against trading for Griffin, but there’s a new stance that I can’t say I ever saw coming.

These disgruntled fans are attempting to make the single dumbest argument I’ve ever heard. It goes something like this:

“The Redskins won three Super Bowls without ever having a true franchise quarterback, so why on earth would they give up so much for any quarterback? Why not stick to the ‘Redskins way’ and build up the offensive line and receiver positions instead?”

While the answer should be self explanatory to anyone paying attention, I’ll go ahead and tackle it anyway.

During that span, 21 different quarterbacks* started at least one game for Washington (and lets not forget the nine coaching changes, countless offensive coordinators, etc.)

During the two decades of futility, the franchise has tried high-priced free agents as well as bargain-basement additions. They’ve traded for experienced veterans and used first-round draft picks in hopes of finding “Mister Right.” But at the end of the day, all the Redskins have to show for it is five winning seasons in 20 years.

Think about that for a second: the Redskins have finished a season with a winning record just five times since ’92. And they’ve made it to the playoffs just four times and have just three postseason wins during the same timeframe.*

*For those wondering, the three quarterbacks who earned a playoff win for Washington over the last two decades are Rypien in ’92, Frerotte Johnson in ’99 and Brunell in ’05. And yes, I’m as amazed as you are that they still don’t have a wing dedicated to them in Canton.

Conversely, the Redskins have finished with double digit losses in 10 of the last 20 seasons while winning the NFC East just once (1999). If that’s not bad enough, they’ve finished in last place in five of the last six seasons.

Anyone still think the ‘Redskins way’ is the best method to build a franchise? I mean, honestly, what’s the worst that happens if Griffin does become a bust — the team continues to stink? The worst possible outcome is he doesn’t pan out and the team remains as bad as they are now. If he’s actually half as good as advertised, the burgundy and gold are set at quarterback for the next decade.

Forget the Heisman Trophy. He was the most exciting player in college football last season and single-handedly made Baylor relevant on a national level. Considering what Waco, Texas used to be known for before Griffin’s arrival, I’d say this kid is pretty special.

That’s why it was time for the front office to do something drastic. That’s why head coach Mike Shanahan and general manager Bruce Allen were willing to part ways with so many high draft picks for the chance to land a top-tier talent like Griffin.

Shanahan is heading into his third season in Washington having gone just 11-21 and clearly felt like it was no longer time to play it safe and/or ignore the quarterback position while trying to upgrade other areas of need.

Go ask a Dallas fan who has actually been to Texas (not easy to find, I admit) how “excited” they are about having their favorite team face Griffin twice a year. If they’re anything like my buddies from the Lone Star State, they still haven’t fully recovered from RGIII’s beatdown of the University of Texas last season.

Sure, some doubters will say the team’s latest move ensures the Redskins once again take home the title of “offseason champs.” But the way I see it, if Griffin is half as good in the pros as he was in college, this will be their last offseason championship for a long, long time.

[And finally, for those who are interested, we’ve got a brand new t-shirt for sale honoring the new face of the franchise.]