for redskins, it has to be robert griffin III 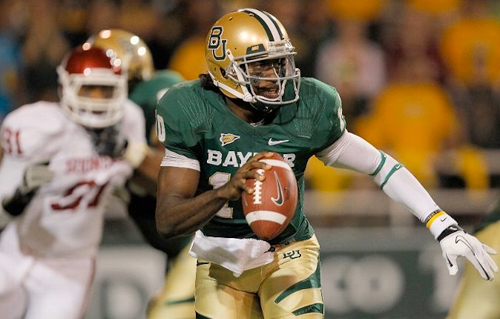 When it comes to the most important position on the biggest team in town, there is only one acceptable answer.

No, it’s not Peyton Manning. And for better or for worse, it’s not Andrew Luck either. At the end of the day, the player who has to be the face of the franchise for the Washington Redskins is Robert Griffin III.

Look, anyone familiar with my work knows I’ve been on the RGIII bandwagon for a while now. The way this young man carries himself on and off the football field has always impressed the hell out of me.

And as someone who spent two and a half years out of my life stationed at Fort Hood in the middle of nowhere Texas, I know where he came from and what he’s all about.

Having parents who both served in the U.S. Army has obviously helped Griffin to become a natural leader.

His teammates absolutely love everything about him and you’ll never have to worry about the 22-year-old getting his first big payday and letting the money go to his head or turning into some kind of raging ego case.

While every rookie comes with some risk, I continue to believe that Griffin is as close to a sure thing as you’re going to get these days.

As long as he ends up in the right system with a coaching staff that is willing and able to work with his skill set, I fully expect RGIII to become one of the most popular and marketable stars the NFL has to offer.

Wouldn’t it be nice for the Redskins to have a player like that?

That being said, I know that more than a few ‘Skins fans have concerns about Griffin. I know that not everyone is on board with the idea of acquiring the Heisman Trophy winner or the price tag that’s attached to moving up in the draft to land the Baylor standout.

With that in mind, I’ve decided to address some of the most common arguments I’ve heard by skeptical fans who are against Griffin landing in D.C.

The Redskins aren’t one player away. They simply have too many needs to mortgage their future for one player.

For better or worse, this will be the defining offseason of the Mike Shanahan era.

Sure, he’s a two-time Super Bowl winning coach and all, but the majority of his success came elsewhere* and his record in Washington is a lot closer to that of Jim Zorn and Steve Spurrier than it is to his golden years in Denver.

*A Redskins tradition during the Daniel Snyder era.

In his first season, Shanahan tried to win with an aging veteran. That experiment failed miserably.

In his second season, Shanahan opted to focus on other areas and go into the season with two of the least heralded quarterbacks the league had to offer.

The Redskins spent less on the quarterback position than any other team in football and you saw how well that worked out, right?

As Shanahan heads into the midpoint of his five-year contract, it’s time to address the quarterback position once and for all. Rather than embracing another past-his-prime quarterback or settling on the “best available,” why wouldn’t Shanahan go after the most electrifying player in this year’s draft?

Let me ask you a serious question – do you think the New York Giants regret for a second the decision to trade away multiple high draft picks for Eli Manning?

Sure, the Giants had to sacrifice to acquire their quarterback of choice, but two Super Bowl victories later it’s safe to say they’re not losing sleep over missing out on Shawne Merriman or whoever else New York would have selected in the 2005 draft.

I understand the sentiment of fans who saw the Redskins stockpile draft picks last offseason and want nothing more than another double-digit draft class, but there’s got to be a balance between quantity and quality.

Last year’s draft class helped to build some much-needed depth across the board. But at some point the Redskins have to do more than just collect rookies like baseball cards if they want to be competitive.

And most importantly, having the right quarterback can help elevate everyone else around him.

Teams like Green Bay and Pittsburgh give up a ton of sacks every year, but they’re always among the NFL’s elite because Aaron Rodgers and Ben Roethlisberger are two of the best in the business.

It doesn’t matter who lines up at receiver for New England or New Orleans because Tom Brady and Drew Brees can make anyone (other than Chad Ochocinco) productive.

The Redskins could have Vincent Jackson, Dwayne Bowe and the best offensive line in football, but it won’t matter if Rex Grossman is behind center.

Get a real quarterback, and everyone else around them becomes a little bit better.

If Griffin III is a bust, it’ll set the franchise back another five years or so.

Quarterback is easily the most important position on a football team. With an elite quarterback, anything is possible. Without one … well … let’s just say it’s an uphill battle that most franchises are unable to overcome.

With the exception of Johnson, who seems slightly out of place in this conversation, those are easily some of the biggest names in football.

And rather than regurgitating the laundry list of mediocre quarterbacks who have come and gone in Washington over the last decade or so, I’ll simply point out the following:

The last time the Redskins won the NFC East was in 1999.

In related news, the last time the Redskins had a Pro Bowl quarterback was Brad Johnson in 1999.

Prior to that, the Redskins last won their division in 1991.

It should come as no surprise that Washington had a Pro Bowl quarterback – Mark Rypien – that season as well.

If the Redskins are finally going to return to respectability, it’s going to have to start with improved play in the NFC East.

History shows, if that’s going to happen, it’s going to take a Pro Bowl performance from their quarterback.

Griffin’s frame and durability come into question because of his style of play.

As one local columnist wrote, “Running quarterbacks in the NFL wind up in two places: the ground and the injury list.”

And that’s true, to a certain extent. Philadelphia quarterback Mike Vick has amassed more than 5,200 rushing yards during his 10-year career, and yet, he’s only played in all 16 games of a season once.

So once again I understand why some local fans are concerned about investing so much into a player who might not be able to withstand the pounding that comes with consistently tucking the ball and running.

But RGIII isn’t Vick. In fact, he doesn’t even consider himself a running quarterback. Griffin is happy to call himself a pocket passer who has the ability to run with the football if need be.

Just because he has the ability to run a 4.41 40-yard dash doesn’t mean Griffin intends to take off any time his first target isn’t open.

He’s simply someone who uses his mobility to extend a play and buy his receivers more time when need be. Don’t believe me? Go back and watch this game-winning throw against No. 5 Oklahoma with eight seconds remaining.

Although the opportunity to take off running presented itself, Griffin never even considered it.

So while you might think he’s the next Mike Vick, just know that he doesn’t feel the same way.

Griffin played in a spread offense. NFL teams do not. Don’t you remember Colt Brennan?

Worry less about the gimmicky college football offense and focus more on the skill set of the player.

Ask yourself if he can do the things Shanahan demand of his quarterback. The Redskins run a ton of bootlegs and rollouts. They like to challenge defenses by taking shots downfield. They don’t want a quarterback who is careless with the football. Strong work ethic is an absolute must.

That, my friends, is everything Griffin brings to the table.

And while many fans don’t know this, Baylor center Philip Blake is on record as saying that he and Griffin stayed after practice every day so the quarterback could get used to taking snaps from under center.

Griffin knew he wasn’t going to play out of the shotgun in the NFL, so he began preparing himself for the transition to the next level a year ago.

Former Redskins safety Matt Bowen, who now writes for the National Football Post and who I have a great deal of respect for, brought up a great point that I feel applies to this topic:

“Thinking like a coach, the opportunity to develop a player like Griffin from day one doesn’t come around too often. From footwork, to mechanics and techniques (in and outside of the pocket), you get to work with a top tier talent in the meeting room and on the field.”

Doesn’t that sound more appealing than trying to figure out if Mike and Kyle Shanahan are willing and able to get out of the way and let Manning do his thing?

Why not build up the offensive line and receiving corps this year and then go all-in for USC’s Matt Barkley next year?

Anyone legitimately suggesting this as an option is a complete moron.

For starters, if the Redskins are able to upgrade the rest of the offense, then chances are they’re not going to have a pick in the top six of next year’s draft.*

*And if they do, then Shanahan might not actually be around this time next year.

Let’s say Barkley plays as well as expected for USC next season. If that’s the case there’s a very real chance he could be the top pick in the 2013 draft.

If you think the price tag is high right now, just imagine trying how much more the front office would have to ship away if they A.) had to trade up higher and 2.) held a pick somewhere in the middle of the first round as opposed to the sixth overall spot they occupy now.

Plus, if that’s your plan you’re essentially wasting away another season in Washington while hoping the owner doesn’t get fed up as the losses continue to pile up and you’re praying Barkley or whoever remains healthy and productive.

That sure does seem like a lot of variables for a player who might very well end up in the same situation Luck finds himself in right now – the sure-fire top pick who Indianapolis has no desire to pass up.

Like I said earlier, this is the defining offseason for the Shanahan era in Washington. He doesn’t have the luxury of going cheap on quarterback for another season and waiting for Barkley or whoever else down the road.

The time is now and the player who is best suited to lead this franchise back down the road to respectability is there for the taking. After putting Baylor football on the map, he’s clearly qualified.

The only question remaining is – will the front office seize this opportunity and go all in on the one player who can save this sinking ship or are Redskins fans destined for another decade of mediocrity?