peyton manning in a redskins jersey 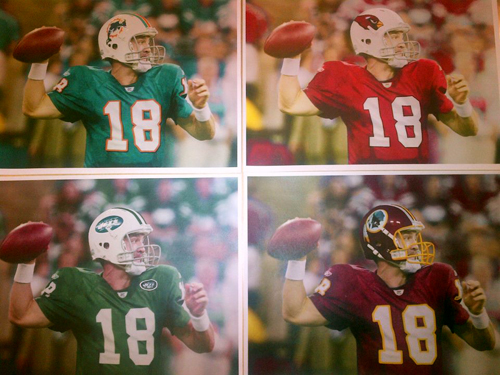 Thanks to ESPN’s NFL insider Adam Shefter, football fans now have the chance to see what (soon to be former) Indianapolis Colts quarterback Peyton Manning might look like next season.

Assuming Manning’s health gets to a point where he can resume his playing career, Manning might very well end up playing in Miami, Arizona, New York or … heaven help us … Washington, D.C.

Personally, I think the two most likely destinations for Manning in this image would be with the Cardinals or the Jets. I still believe the Dolphins will take a run at Green Bay quarterback Matt Flynn and the Redskins should focus their attention on drafting and developing a rookie quarterback rather than reverting back to old habits and chasing after other team’s star players.

Call me crazy, but something about spending money on a 36-year-old who has undergone four surgeries in the last two years just doesn’t seem like the smartest move the Redskins could make this offseason.

Either way, thanks to Shefter for finding a new and creative way to link Manning to the burgundy and gold.