caps finally have cause for celebration 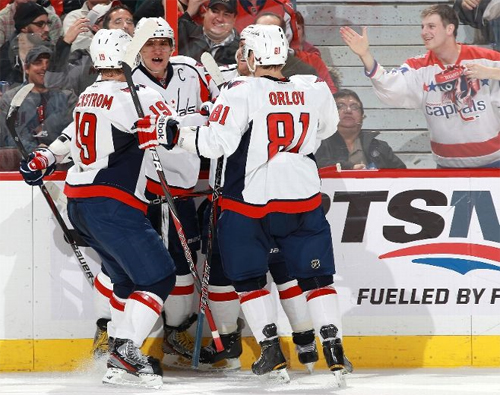 It seems like only yesterday that I was posting an interview with Washington Capitals forward Troy Brouwer.

In that feature, I specifically mentioned that if the Caps are going to turn things around and get this season back on track, it’s going to come thanks to players such as Alex Ovechkin, Nicklas Backstrom and Brouwer.

In related news, the Capitals defeated the Ottawa Senators 5-3 thanks to third-period goals from Backstrom, Ovechkin and … you guessed it … Brouwer.*

*Sure they weren’t playing as the team’s top line last night because Alexander Semin replaced Brouwer, but that doesn’t mean I still can’t get a little credit for essentially spelling out which three players were going to have stand-out performances against Ottawa.

The Capitals came flying out the gate against the Senators – outshooting the home team 15 to six in the opening frame, but had nothing to show for it after 20 minutes.

They even had a two-man advantage for nearly a full two minutes, but couldn’t put the puck in the net. It seemed inevitable that doubt was beginning to creep back into the players’ minds and another lackluster finish was on the way.

“It is tough when you’re doing the right things and things aren’t going your way,” said Brouwer. “You want to change over to doing the wrong things to see if they might work. But guys were good. They stuck with it. We got some breaks finally at the end.”

The first break of the night for Washington came off of the stick of former captain Jeff Halpern, who simply crashed the net and was rewarded with a big, juicy rebound.

Senators goalie Craig Anderson made the initial save on defenseman Dennis Wideman’s shot, but the puck deflected right to Halpern who snuck it past Anderson for his second goal of the year.

From there, the game tilted in favor of Ottawa, with the Senators taking the lead on a soft goal allowed by netminder Tomas Vokoun and a great individual effort by forward Nick Foligno.

Sure, the Caps were outplaying the Sens, but they once again found themselves behind on the scoreboard.

“We had lots of chances but we weren’t scoring,” said coach Dale Hunter.

Trailing 2-1, the Capitals got a huge boost from Backstrom – who finally showed his teammates that it’s okay to score a goal on the powerplay.

Backstrom’s beautiful wrist shot not only tied the game halfway through the third period, but it helped remove a massive weight from the proverbial shoulder of Washington’s powerplay unit – who had just two goals in 53 chances prior to Nicky’s 10th goal of the season.

Four minutes later, the Capitals struck again. The team’s current captain scored what has to be considered a “vintage Ovechkin” tally – circling behind the Ottawa net, skating towards the blueline, slamming on the brakes to ditch a defender and then abused Anderson with a monster slapshot to give Washington a 3-2.

Just 15 seconds later, Brouwer got the eventual game winner* and the Capitals closed out the game with an empty netter from defenseman John Carlson to ensure the good guys left the building happy.

*As if Brouwer wasn’t making his presence known enough as it is thus far this season by ranking third in the NHL in hits, he finished this game with a Gordie Howe hat trick – which means he had a goal, assist and a fight on the night. A few more games like this and it’s only a matter of time before Brouwer becomes a fan favorite in D.C.

The victory snapped a five-game road losing streak for Washington, and hopefully provided a fragile team with a little bit of confidence moving forward. They won an away game for the first time in a month, scored a powerplay goal for the first time in 24 opportunities on the road and gave Hunter his second NHL win.

With nine goals in their last two outings, Washington’s offense seems to be back on track as well. Hopefully these encouraging signs will lead to better days ahead for a team desperately in need of some good fortune.

If the guys can match that level of intensity and effort when they take the ice Friday night against Toronto, there’s a good chance that they’ll post back-to-back wins for the first time under the new coach.

If they continue to sink back into some of the bad habits that have plagued the team for much of this season, then there’s little doubt Phil Kessel and friends will take full advantage.

Regardless of how the next game plays out though, the Capitals are at least worth tuning in for once again. That hasn’t always been the case this season, as the players were content to go through the motions during the final days of the Bruce Boudreau era.

With a big win in Ottawa, here’s hoping that Ovechkin and friends are finally able to get pointed in the right direction.