getting to know troy brouwer 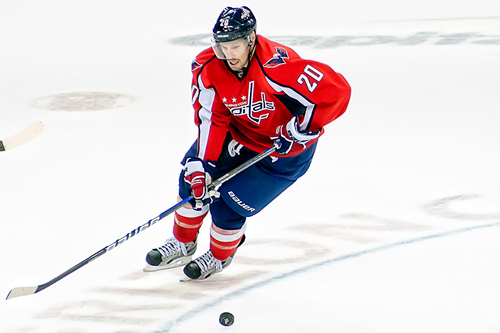 The Washington Capitals started this season with such high hopes and promise.

On paper, the 2011-12 roster was as deep from top to bottom as any the Capitals have had. Some even suggested there was more talent on this year’s Caps than any previous team in franchise history.

When Washington thumped the Detroit Red Wings 7-1 to improve to 7-0 on the season, it appeared the front office’s aggressive offseason was already paying off.

Since then, the Capitals have gone just 6-12-1 and the team has gone from the NHL’s hottest to most disappointing in a little more than a month.

With his team floundering and players seemingly tuning him out, coach Bruce Boudreau was let go. He was replaced by fellow fan favorite Dale Hunter in hopes of salvaging the season and, just as importantly, getting the top-tier players back on track.

If Washington is going to do anything other than meltdown this season, it’s going to have to start with the top line of Alex Ovechkin, Nicklas Backstrom and Troy Brouwer.

Should those three gentlemen get back on track, the Capitals still have plenty of time between now and the playoffs to make Hunter’s debut season memorable.

If not, Caps fans might be forced to look back on the 2011-12 season as the beginning of the end for this team as currently comprised.

With that in mind, I caught up with Brouwer to get his thoughts on the first quarter of the season and to see just how confident the left wing is that these players can collective get their act together before it’s too late.

The Capitals traded their first-round pick (26th overall) to the Chicago Blackhawks in exchange for you. What was your reaction when you found out you were headed to a new team?

“I wasn’t in too much shock,” Brouwer said. “I was really excited that I was going to a team that has a chance to do something very special — to win a lot of hockey games and give themselves a chance to try and win the Cup. Obviously, we’ve been stumbling a bit, but every team goes through a period like that where they’re having troubles here and there. Hopefully we can turn it around now.”

How has the transition gone coming from Chicago to Washington?

“Well, I hope I’m fitting in pretty well,” Brouwer said. “I’m getting along with all of the guys and they’re an easy group to get along with. Most teams have a lot of the same types of players on them, even if hockey players are an interesting breed. We’re all kind of the same for the most part.

“I think I’ve been playing pretty well even if I’m off to a little bit of a slow start personally,” said Brouwer, who has seven goals and seven assists on the year. “I’ve been able to pick it up as of late. The team has had some ups and downs so far this season, but you get to know a little bit more about your fellow players when you go through something like that.”

How would you describe your style of play for those fans who might not know much about you?

“I just try to be a strong power forward,” he said. “I like to chip pucks, get down low and finish my checks. Hopefully I also add a little bit of scoring ability to help out as well.”

You’re currently third in the NHL in hits (with 94), so you’ve definitely been able to make your presence felt so far. And with the switch from Bruce Boudreau to Dale Hunter, you’re now playing for a coach who obviously is familiar with that style of play …

“Yeah, he was a big — well, I shouldn’t say big — but he was a tough and rugged player who had a great scoring touch,” Brouwer said. “Hopefully he’s got a few tricks and some insight that he can pass on to me to help round out my game and make me a better player.”

Be honest. How much have you seen of Hunter’s playing days?

“He obviously played back when I was pretty young,” he said. “For me, the big players I watched a lot of were Trevor Linden and Pavel Bure because I grew up in Vancouver. Back then I only really followed the Canucks, but I’ve heard a lot of him and watched quite a few videos and tapes of him fighting and scoring goals. But he was definitely a good player and hopefully it can translate into him being a good coach.”

The first thing I’ve noticed that’s different from his playing days is how much more soft spoken Hunter is these days. Have you noticed that as well?

“Yeah, he’s got that intimidating and tough demeanor to him,” he said. “But when you talk to him one-on-one he’s a really good guy, and because he’s played in so many games, he knows what it’s like to be a player and how to treat players. I think he’s going to do a really good job here.”

Obviously, it’s very early, but how different are things going to be on the ice under Hunter as opposed to Boudreau’s preferred style of play?

“You know, they do have different styles of coaching and different systems,” Brouwer said. “He’s going to want to change it up some, so that we’re a little bit tighter defensively and we’re finishing our checks. We need to make sure we’re limiting other team’s chances and making sure we’re doing the little things to give us a chance to win every night.”

What do you think has been missing? What does this team need to do a better job of on the ice to get everything back on track?

Obviously there’s still plenty of hockey left to be played this season. Listening to Brouwer’s thoughts on the team’s current struggles leads me to believe that the guys in the locker room don’t feel a radical overhaul is needed to make this team perform at the level it’s expected to.

The 26-year-old says the players just need to do a better job of playing consistently on both sides of the rink and winning the little battles that take place countless times during the course of a game, and their fortunes will begin to improve.

If not, it’s likely only a matter of time before the front office feels obligated to make another round of sweeping changes. Lets hope it doesn’t have to come to that.