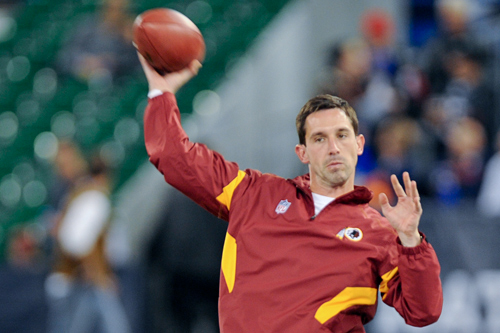 Mike Shanahan has been the head coach of the Washington Redskins for 23 games.

Because I’m apparently a masochist, I went back and crunched the numbers those three gentlemen racked up during their time with the Shanahan clan, and because misery loves company, I’m going to share those stats with you now.

Since Shanahan took over, those three Redskins quarterbacks have completed 491 out of 855 passes they’ve attempted (57 percent) for 5,488 yards. They’ve thrown 28 touchdowns, while turning the football over 47 times (31 interceptions and 16 fumbles). That’s good enough for a combined quarterback rating of 72.4 and a 9-14 record.

In case you’re wondering, that translates to an average of 21 completions on 37 attempts for 238 yards with a touchdown and two turnovers per game. That’s what Redskins fans have “enjoyed” since Jim Zorn and friends were run out of town with the promise of better days ahead.

It was at this point that I became curious how the three-headed monster of “McGrossbeck” compares to the previous three starting quarterbacks in Washington — Jason Campbell, Mark Brunell and Patrick Ramsey.

All three were eventually run out of town, but I wondered if their statistics any better or worse than what passes for acceptable quarterback play under Mike and Kyle Shanahan? Here’s what I found out:

But what these numbers really say to me is that it’s been a long, long time since the Redskins enjoyed solid and consistent production from the quarterback position. Campbell’s stats aren’t terrible, but they’re not nearly good enough to say definitively that he’s a sure-fire franchise quarterback.

And without a franchise quarterback to build around, the Redskins have suffered. Quarterbacks, coaches and coordinators have come and gone over the last decade, but the results remain the same — with Washington going just 63-88 since 2002.*

*Of course, the previous nine seasons weren’t any better, but I really didn’t want to go back and crunch the numbers for every quarterback Steve Spurrier, Marty Schottenheimer and Norv Turner trotted out during their tenure. I’d rather watch a marathon of Sarah Jessica Parker movies than spend another minute on bums like Tony Banks, Gus Frerotte and Heath Shuler.

In related news, I’m convinced now more than ever that the Redskins should do anything and everything in their power to acquire Stanford quarterback Andrew Luck.

Scouts believe the 22-year-old’s skill set is the most NFL ready since Peyton Manning and/or John Elway, so just imagine what swapping out Beck or Grossman in favor of Luck would mean to the Redskins overnight.

Not only does Luck possess what many consider once-in-a-generation talent, but his arrival would improve the Redskins by simply subtracting those guys from the equation.

Even if he’s asked to play with the same exact supporting cast that got shut out 23-0 last weekend against the Buffalo Bills, Luck is skilled enough to move the offense past midfield and challenge a defense that gives up more than 24 points per game. Obviously, the same cannot be said about the current starter.

Which is why I’m already doing my best to move on from the current debacle and am turning my attention to the pursuit of a franchise quarterback.

The Football Outsiders website has an interesting column on this very subject, and while it was originally posted back in 2006, there is one particular paragraph that still holds true today:

“The QB position is by far the toughest to fill, and most teams are (and should be) willing to fill it by any means necessary. First round QBs are no sure thing, but anyone picked after the first round appears to be a very long shot that will require several years of development. And even those late round guys that do work out will probably have to move to a new team to be successful. The bottom line here is that until you’ve found your guy you should jump at any opportunity to acquire a quality starter, be it early in the draft, late in the draft, via trade, or through free agency.”

Sure, other college quarterbacks like Landry Jones, Robert Griffin III and Matt Barkley might go on to become solid NFL players, but none of them is on the same level as Luck. That’s why I’m willing to give up as many as four first-round draft picks to land Luck.

Now, there’s a very real chance that whichever team lands the top pick in the 2012 draft won’t pass up on taking Luck — no matter the offer. The kid is that good. And if/when that happens, the Redskins will be forced to turn to Plan B.

Would that be selecting the next-best quarterback available in the draft? Could Jones, Griffin III, Barkley or someone else from that talented draft class be the guy who finally becomes the long-term solution in Washington?

Man, I hope so. Because at this point, I’d almost rather see what Kyle Shanahan could do at quarterback rather than watch another 60 minutes of Beck.

Because seriously, if Shanahan can throw a football within five yards of his intended target on a deep pass, he’s already more qualified than the guy taking snaps now.

That’s how low the bar is set these days in D.C.