why the redskins need andrew luck 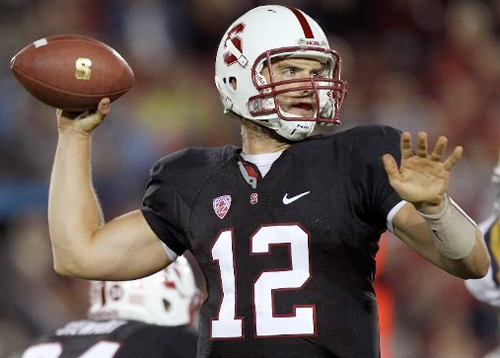 Let me say this up front — when it comes to the Washington Redskins, I’m not someone who has ever encouraged the team’s eagerness to “win” the offseason.

I’ve played fantasy football since 1997,* but I’ve never had the desire to see an actual franchise run with the same frivolous mindset.

I’ve never gotten behind mortgaging the future or cutting corners to try and do the “quick fix.” I want my favorite football team to be a winner for more than one fluky season every few years.

I dream of the burgundy and gold being known outside of our nation’s capital as anything other than a doormat or laughingstock and pray that this franchise returns to glory so that my son can one day share in the joy that the Redskins brought me during my formative years.

*We actually had to fax in our waiver wire transactions to the league commissioner because not everyone in the league had access to a computer on a regular basis. That’s about as close to “back in my day we had to walk to school uphill in the snow both ways” as my stories get.

Which is why what I’m about to say next might seem so out of place — the Washington Redskins need Andrew Luck at any cost.

Sure, the Stanford standout is so talented that any team in the NFL would be lucky to have him, but I’d argue that no franchise in football needs a little Luck more than the Redskins.

Since it’s unlikely Washington will enter the 2012 NFL Draft with the first overall pick, that means the Redskins would need to make a trade to acquire  the 6-foot-4 and 235 lb. quarterback.

And since Luck is widely viewed as a once-in-a-generation type of can’t-miss talent, I’m on board with Washington giving up as many as four first-round draft picks if that’s what it took to land the Houston, Texas, native. In the long run, I’m convinced he’s more than worth that steep price tag.

Now, this is the point where I lose some folks. It’s nice to have grandiose dreams of Luck suiting up in the burgundy and gold, but it’s another thing entirely to offer up nearly half a decade’s worth of top draft picks to seal the deal.

But that very well could be the price for the player widely considered the best prospect at the NFL’s most pivotal position since Peyton Manning or John Elway.

Look at it this way — the Redskins gave up two high draft picks to acquire 33-year-old Donovan McNabb from the Philadelphia Eagles before the 2010 season. And while it was a different regime, Washington was also the franchise willing to pony up two first rounders for a past-his-prime Chad Ochocinco not too long ago.

Even if we remove the Redskins from the conversation, look at what the Chicago Bears were willing to give up to get Jay Cutler.

The Bears thought enough of the third-year pro to send first-round picks in 2009 (18th overall) and 2010, along with a third-round pick in ’09 and veteran Kyle Orton to Denver for the 25-year-old and a future fifth rounder.

There’s also the case of Eli Manning forcing his way out of San Diego, which led to the Chargers dealing him to the New York Giants in exchange for fellow rookie quarterback Philip Rivers, New York’s third-round selection in the same 2004 draft and their first and fifth-round picks in ’05.

The moral of the story is, franchise quarterbacks don’t come cheap. But that shouldn’t stop a team from grabbing one if they can.

While Cutler, Palmer and the younger Manning were all first rounders, none of them were as highly touted as Luck is. And let’s not forget — two of the three weren’t rookies when they became available.

Let me ask you, the reader, a simple question — if the Redskins could go back in time and offer the Indianapolis Colts four first-round picks for a rookie named Peyton Manning, would anyone in our nation’s capital object? Of course not.

Because the Colts, led by Manning, have been one of the league’s most consistent winners for more than a decade now. Their 141-67 regular season record with Manning is something ‘Skins fans can only dream of.*

*Washington went just 92-116 with only three winning seasons during the same span.

Prior to this season, the Colts have made the playoffs 11 of the last 12 years thanks to Peyton. Even if Manning misses the entire 2011 season recovering from neck surgery, his resume still includes: a Super Bowl trophy, Super Bowl MVP award, four NFL MVP awards, 11 trips to the Pro Bowl and, not to mention, franchise records for career wins, passing yards, passing touchdowns and pretty much everything else you can think of.

Even if Luck only accomplishes half of that in Washington, he’d still end his career as one of the most beloved sports figures D.C. has ever known. That’s why the Redskins front office should do everything in their power to land the 22-year-old.

Whichever team lands the top pick is obviously going to have some holes to fill in their lineup. An offer of four first-round picks would be awfully difficult to pass up — especially if the Redskins continue to plummet and finish the season with a top 10 pick.

A team like Indianapolis or Miami could drop a few spots in the draft, still get a quarterback if they’re so inclined and have plenty of ammunition to restock their roster.

Though the best-case scenario likely involves St. Louis with the first overall pick. They’re happy with quarterback Sam Bradford and would be much more likely to move out of the top spot for a bevy draft picks. So feel free to root against them from here on out. They’re still coming down from the high of the Cardinals’ World Series win, so they won’t mind.

The other argument I continue to hear is this — the Redskins clearly have more needs on offense than just a quarterback, so why take Luck if they don’t have anyone to block for him or catch his passes?

Again, let’s look at the Colts.

Last season, Manning and friends made the playoffs with a 10-6 record. This year, with virtually the same roster (minus an injured Manning), the Colts are 0-8. Indianapolis has plenty of holes, but a franchise quarterback as talented as Manning (or Luck) goes a long way toward masking those flaws.

If the Redskins were able to land Luck and then turn their attention to upgrading the pieces around him, they’d be a lot better off than rolling the dice with a lesser quarterback and using higher draft picks on the offensive line or receiver position.

Teams can build depth on the offensive line or at receiver with second- or third-round picks, but history shows it’s a whole lot tougher to find a franchise quarterback in the later rounds.

By simply adding Luck to the equation, the Redskins become leaps and bounds better overnight. Mike and Kyle Shanahan get to remain in place and actually benefit from having someone talented enough to execute their offense (as opposed to the two bums currently collecting paychecks).

That translates to stability and continuity to those players deemed worthy of keeping around, and just as importantly, it means the offense can actually put together a drive from time to time to lessen the burden on the defense. Simply having Luck on board can have that much of an impact throughout the entire franchise.

And lastly, is there a better candidate to coach someone considered the best quarterback to come out of college since Elway than the guy who coached Elway? I think not. Those two teamed up for two Super Bowl wins back in the day, so it would only be fitting to see what Luck could do under Shanahan.

That is why, for the first time in all my years as a Redskins fan, I truly hope the franchise does whatever is necessary to reclaim the title of “offseason champs.”

After 20 years of cheering for mediocre teams with a revolving door at quarterback, it’s past time Washington enjoyed a little good fortune.