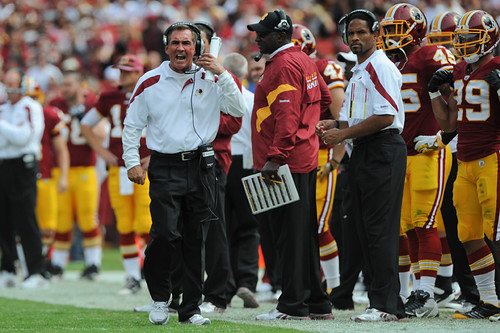 With two weeks to prepare for a key matchup against a divisional opponent on the brink of a total collapse, the Washington Redskins laid a big, fat egg.

While other teams have had success against the Philadelphia Eagles this season by getting off to a quick start on offense and then aggressively pursuing quarterback/turnover machine Mike Vick on defense, the Redskins were unable to do either.

Instead, the Redskins offense was horrifically inept and the defense was unable to avoid costly penalties while simultaneously failing to stop (or even slow down) Philadelphia’s balance of passing and rushing plays.

Basically, it was the perfect storm of suck and the team’s abysmal start doomed Washington’s chances of driving the final nail in the coffin of hated rival on a week when people in Philadelphia were already calling for the firing of their head coach, Andy Reid.

Unfortunately, the fact that the Redskins were thoroughly unprepared when they took the field shouldn’t really come as a surprise to anyone who has been watching the team in 2011.

That’s because the Eagles game was just the latest chapter in the team’s continuing struggle to resemble a competently-run offense during the opening stages of a contest.

Why? Because the Redskins have scored just one first-quarter touchdown this season, and it came against the winless St. Louis Rams. In the team’s other four games, Washington has been outscored 24-6 in the opening quarter.

Aside from a 10-play, 42-yard drive that resulted in a field goal against Dallas, the Redskins have been at their worst on the opening drive. In the other four games, the burgundy and gold’s opening drive has resulted in two punts and two interceptions.

With numbers like that, it’s nearly impossible for the Redskins to make a worst first impression against an opponent. And let’s be brutally honest about the situation – we’re not exactly talking about a murderer’s row of competition here either.

Washington’s opponents through the first five games this season have had a combined 9-18 record. What’s going to happen when the Redskins have to face teams that are actually good?

On second thought, please don’t answer that. Some things are clearly better off left unsaid.

In the season opener, the Redskins opening quarter drives consisted of two punts, a missed field goal and a touchdown run by Tim Hightower.*

*Remember him? Neither does Kyle Shanahan.

The following week, against the Arizona Cardinals, the Redskins were able to muster two interceptions and a field goal in the opening frame.

Week 3 featured an offensive explosion – at least by local standards – when the Redskins put together drives that resulted in two field goals and a punt in the first quarter against Dallas on Monday Night Football.

Up next was a matchup against the Rams, a winless doormat that has been unable to stop the run all season long. So naturally the Redskins outsmarted themselves and started the game with five consecutive passing plays.

After 15 minutes of action, the Redskins had a punt and a touchdown pass from Rex Grossman to receiver Santana Moss against St. Louis.

And last weekend, the Redskins’ first quarter “featured” an interception and a punt.

In other words, Washington has been unable to put points on the board nine of the 14 times they’ve had the ball in the opening quarter in 2011.

When a team is that slow out of the gate and routinely lets mediocre opponents hang around, the margin for error is almost nonexistent.

It’s unfortunate too, because Washington’s defense has been stout for most of the season. Jim Haslett’s revamped defense currently ranks third in the NFL in points allowed per game (16.6) and sixth in yards allowed per game (321.6), and yet, the Redskins are just 3-2.

On paper, this team appears to be custom-made for the NFC East, thanks to a solid stable of running backs and an aggressive defense.

But games aren’t played on paper and the coaching staff continues to baffle Redskins fans with a knack for abandoning the running game – even though that’s pretty much what made Mike Shanahan the highly-respected coach he is today.

Even though the rest of the NFL thinks Grossman’s skills rank him somewhere between “game manager” and “backup,” the Shanahans continue to take the ball out of the hands of Hightower, Roy Helu and Ryan Torain in favor of the Rex Cannon.

In related news, Grossman has just 827 passing yards with four touchdowns, 10 turnovers (nine interceptions and a fumble) and a quarterback rating of 55.1 in his last four games.

Watching Washington’s offense of late has basically spiraled into praying tight end Fred Davis can find a way to get open. If not, there’s zero hope that Grossman and friends can move the chains and put points on the board.

Davis has 22 catches for 343 yards and a touchdown in 2011, with 15 of his 22 catches resulting in a first down. But as the Eagles game showed, when a defense can limit Davis’ impact, the Redskins have yet to establish another go-to weapon on offense.

With tight end Chris Cooley out indefinitely and offensive linemen Kory Lichtensteiger and Trent Williams both out of action as well, it’s difficult to envision Washington’s offense suddenly correcting these deficiencies.

Maybe the team will turn to backup John Beck in hope that he can pick up where he left off against the Eagles.

Even if Beck doesn’t become the second coming of Kurt Warner or the subject of Disney’s next box office hit, he’ll greatly improve the team’s chances to win by simply being more responsible with the football than Sexy Rexy.

But regardless of who lines up at quarterback this weekend against the Carolina Panthers, the Redskins aren’t going to turn things around unless someone does a better job of getting the offense prepared for a faster start.

Sputtering out of the gate and letting yet another subpar team hang around and gain confidence is a recipe for disaster.

Here’s hoping that Mike and Kyle Shanahan spend this week drawing up a gameplan that gives someone other than the punter a chance to shine in the first quarter.

Because if they don’t, I don’t even want to think about how depressing things are going to be in our nation’s capital one week from now.