john beck is the people’s champ … for now 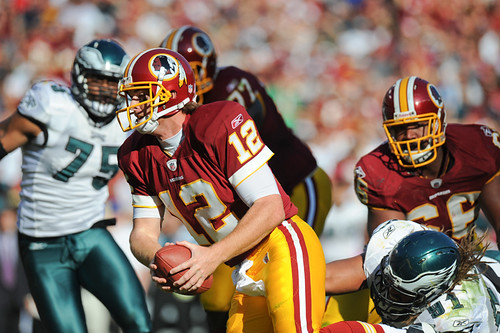 As the Washington Redskins took to the field in the fourth quarter with a lineup that included John Beck at quarterback, Sean Locklear at tackle and someone named Erik Cook at center, I leaned over to the person next to me on the sideline and asked “Which preseason game is this again?”

It was that kind of day for Redskins fans as starting quarterback Rex Grossman found himself in the role of Donovan McNabb after being benched for ineffectiveness, with the added bonus of the offensive line being in shambles after guard Kory Lichtensteiger and tackle Trent Williams were knocked out of the game due to injuries.

With two weeks to prepare for the 1-4 Philadelphia Eagles, Grossman completed five passes to tight end Fred Davis, four passes to the rest of Washington’s pass catchers and four passes to Philadelphia defenders in three quarters of action. It’s safe to say that those aren’t the type of numbers that help win over a notoriously fickle fanbase.

Finally, his coaching staff had seen enough and mercifully sat The Rex Cannon down before he could do any more damage.

And that’s the backdrop for what could be the beginning of the John Beck Era in our nation’s capital. Make no mistake about it — Beck didn’t do anything to win the job (other than stand next to Mike and Kyle Shanahan on the sidelines while the only other quarterback on the roster went down in flames). He simply represented “not Rex” on a day when Grossman wore out his welcome.

That being said, I genuinely hope that Beck maximizes his 15 minutes of fame. Because as far as I’m concerned, he’ll never be more popular than he is right now.

For starters, he’s the backup quarterback in a town that has gushed over the position since Sonny Jurgensen and Billy Kilmer competed for the starting role nearly 40 years ago. He’s not a grizzled veteran. He’s not an upstart rookie. He’s just your typical run-of-the-mill inexperienced 30-year-old who might just luck his way into a starting gig by default.

And as insane as it sounds, that’s not cause for concern for Redskins fans — judging by the sound of the ovation Beck received when he took to the field Sunday.

You see, even though he couldn’t cut it with two other NFL franchises, Beck still represents the great unknown to many ‘Skins fans.

Sure, rational fans see Beck, who hasn’t started a game since 2007, as the guy who came to town in a trade for Washington’s seventh-best cornerback* and realize that utter failure is far more likely than the “made for TV movie” delusional fans are trying to talk themselves into.

But then again, D.C. has never really been known for common sense and rational thinking. So why spoil this moment for those who choose to be cautiously optimistic?

I have said repeatedly that I’ve never seen anything from Beck since he joined the team that led me to believe he’s the long-term solution for the franchise’s quarterback woes.

Watching Beck short-armed passes to his receivers’ feet against Philadelphia like he was the second coming of … well … let’s not go there.

Instead, let’s just be happy that no one has ever openly questioned Beck’s conditioning and/or football IQ, he’s willing to wear an armband and move on.

My point is, I’m not a Beck guy. Never have been; probably never will be. But even I think it’s time to see what he’s got.

The five-year pro wasn’t spectacular against Philadelphia by any means, but he was better than Rex against the Eagles – completing eight of 15 passes for 117 yards in one quarter of action. Best of all, he showed the offense that it’s okay for someone other than the kicker to put points on the board.

That alone should earn him a second chance to make a first impression in Washington.

While I respect the opinion of receiver Santana Moss — who made it perfectly clear on Monday that he still thinks Grossman is the best man for the job — I can’t bring myself to the same conclusion.

“No question. That’s not even something that should be asked,” said Moss, when asked if he thought Grossman should remain the team’s starting quarterback. “I think that he deserves to start. [Philadelphia quarterback Michael] Vick threw four picks last week, came back and had a hell of a game. Tom Brady threw four picks two weeks ago.

“I feel like for the flow of the game, it worked and kind of got a spark from bringing Beck in. But I just feel like you can’t just give up on a guy because he had a bad outing,” Moss added.

And that’s where Moss and I disagree. We’re not talking about one subpar performance. We’re talking about a month of uninspired play from the team’s most vital position.

In the season opener against the New York Giants, Grossman was Washington’s best player on the field. He completed 21 of 34 passes for 305 yards with two touchdowns and no interceptions.

Since then, however, he’s been downright dreadful.

In the last four games, Grossman has completed 71 of 131 passes for 827 yards with four touchdowns, 10 turnovers (nine interceptions and a fumble) and a quarterback rating of 55.1.

Against Philadelphia and St. Louis – teams that are a combined 2-9 on the year – Grossman went just 24 for 51 with 286 yards, one touchdown and six interceptions. His completion percentage over the last two games is a paltry 47 percent and his QB rating is an embarrassing 31.6.

If Grossman doesn’t see the field again for a single play this season, he’s got no one to blame but himself.

Addition by subtraction (of Grossman) isn’t the only matter at hand here. Beck might also give the Redskins offense a better chance to win because he’s able to scramble if/when a play calls for it.

Grossman is about as mobile as a zombie and struggled with consistency when the offensive line was healthy.

Now, with Lichtensteiger done for the season (torn ligaments in his knee) and Williams out of action with a high ankle sprain, whoever the quarterback is will likely be running for his life.

Which gives the coaching staff all the more reason to see if Beck can handle the spotlight.

Right now, when Beck takes the field, skeptical fans like me can’t help but crack jokes.

Starting this weekend in Carolina though, Beck deserves his chance at the last laugh.