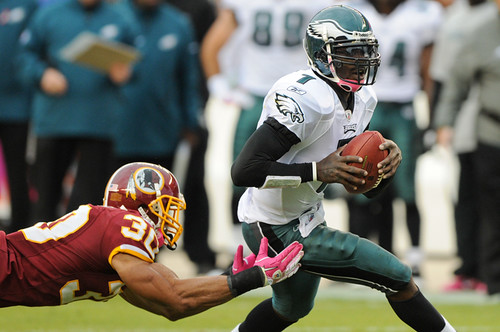 Frustrated with the NBA’s current lockout, Miami Heat forward LeBron James caught the attention of the sports-loving world when he asked ESPN’s football insider John Clayton the following on Twitter:

“When is the deadline for a team to sign a free agent?”

It was a seemingly innocent question that if asked by anyone else on the internet, would be completely forgettable. But when it comes to LeBron and the Worldwide Leader in Sports, there was zero chance that this story wouldn’t get overblown in a hurry.

Now, James clearly isn’t serious about switching sports, he was simply trying to get a reaction while showing his displeasure with the NBA’s announcement that the first two weeks of the season had been canceled.

That being said, if LeBron did actually want to transition to the NFL, there’s only one team he could possibly end up with — the Philadelphia Eagles.

Where else could LeBron go other than the self-proclaimed “Dream Team?”

Seriously, Philadelphia linebacker Jason Babin even referred to the Eagles as “the Miami Heat of the NFL” while his team was busy winning the offseason, so it’s only fitting that the NBA’s biggest diva would end up taking his hypothetical talents to Philly in this scenario.

And that’s the most enjoyable part of all of this – for the first time in a long, long time, someone other than the Washington Redskins gets to be the punchline.

Fans of the Redskins can finally sit back and relish the fact that there is now a team more dysfunctional than the burgundy and gold. Add in that it’s a divisional rival and it’s almost too good to be true.

While the Redskins have finally rid themselves of unnecessary distractions and off-the-field drama, the Eagles have become the NFL’s newest soap opera.

Washington has inexplicably become a place where the only thing that matters is winning, while Philadelphia continues to be the center of attention (for all the wrong reasons) seven days a week.

So sit back and enjoy someone else’s misery, while the Eagles show the rest of the league how not to win in today’s NFL.

It all started back in the offseason, when Philadelphia came out of the lockout as aggressive as ever.

Skill position players were the focal point as the Eagles acquired a new quarterback (Vince Young), running back (Ronnie Brown), receiver (Steve Smith) and defensive backs (Nnamdi Asomugha and Dominique Rodgers-Cromartie). Feel free to notice that none of those big-name players does anything to bolster the offensive or defensive lines.

On paper, those teams always appeared to be loaded with talent. But on the actual gridiron, they were never more than a disappointment.

If a story came out after the season that Vinny Cerrato was secretly calling the shots for the Eagles this year, I’d absolutely believe it. Because he was always content to build the best fantasy football team money (and draft picks) could buy.

Plus, Cerrato was never really interested in building depth on the offensive or defensive line, which is clearly an issue for a Philadelphia team that seems incapable of protecting quarterback Mike Vick for more than one or two plays in a row.

Ask Jason Campbell or Patrick Ramsey how much fun it is to have to run for your life on three out of every four downs and you’ll start to understand how miserable this season has been for Vick thus far.

Of course, he’s the same player who went from claiming “You can’t design a defense to stop me” to crying about referees not protecting him enough in less than a month, so don’t be offended if he’s not overly eager to talk about it.

In addition to neglecting the players in the trenches, the Eagles also suffer from terrible mental lapses and poor decision making.

With the game on the line against Buffalo last week, the Eagles gave away any chance at a victory when defensive end Juqua Parker jumped offside on fourth-and-inches.

Every single person in the stadium knew that the Bills weren’t going to actually snap the football; that they were simply hoping to draw Philadelphia offsides. And yet, the Eagles were more than happy to hand over the win.

The Eagles have also turned the ball over 15 times in five games (most in the NFL), allow more than 26 points per game and rank 30th in the league in run defense.

Best of all, there’s even talk now of the Eagles bringing in a consultant to help a member of the coaching staff who is in over his head. I can only hope they consider a certain bingo caller if/when they make their move.

Amazingly enough, while the 1-4 Eagles are self destructing, the Redskins appear to be the model of stability. They’re 3-1, in first place in the NFC East and the only headlines coming out of Redskins Park these days involve what transpires on the field.

There is no drama (unless you’re willing to overreact to Chris Cooley being Chris Cooley) and the only thing the players care about is getting better each and every week.

Head coach Mike Shanahan gave his players the entire bye week off, and there wasn’t a single story about in-fighting or off-the-field altercations. The players simply rested up, got healthy and headed back to work to build off of their fast start.

The Redskins’ revamped defense, led by a new-and-improved front seven, currently ranks third in the NFL yards and in points allowed. Washington’s ground game, which features a trio of talented ball carriers, ranks eighth in the league.

These are the things a team can accomplish when they make improving the offensive and defensive lines a priority.

There’s a lot more football left to be played this season and winning in September doesn’t guarantee anything in December or January, but it’s still enjoyable to see someone other than the Redskins be a train wreck of a franchise.

Here’s hoping it takes Philadelphia as long as it did the Redskins to realize the error in their ways. If that’s the case, this is going to be a fun decade for the rest of the NFC East.