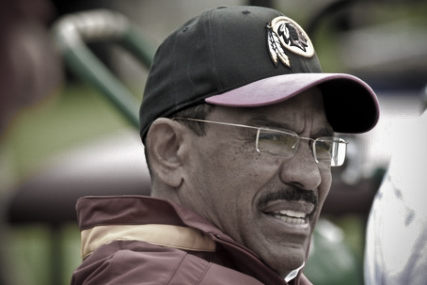 It’s been a tale of two seasons for the Washington Redskins’ offense.

For the first seven games, the Jim Zorn’s offense was downright offensive – struggling to score points and/or move the ball against some of the worst teams the NFL has to offer.

Thankfully, over the last four games, the team’s offensive unit seems to have righted the ship. Against Atlanta, Denver, Dallas and Philly – teams that are a combined 12 games over .500 – the Redskins have improved in pretty much every offensive statistical category across the board.

Over the first seven games, the Redskins offense scored an average of just 13.7 points per game. They averaged 296 total net yards per game, with 93.5 yards coming in the running game and 202.5 yards from the passing game. The ‘Skins offense converted just 25 of 86 third downs (29 percent) and scored on eight of 18 red-zone chances (44 percent).

Over the last four games, the Redskins offense has scored an average of 18.5 points per game. They’ve averaged 332 total net yards per game, with 117.5 yards coming in the running game and 214.5 yards from the passing game. The ‘Skins offense has converted 32 of 64 third downs (50 percent) and has scored on seven of 11 red-zone chances (63 percent).

That’s an improvement of five points, 36 total net yards, 24 rushing yards, 12 passing yards, a 31 percent improvement on third downs and 19 percent improvement in the red zone per game. They’re also giving up less sacks, turning over the ball less frequently and putting together longer drives against quality opponents than they were capable of against teams a combined 13 games under .500.

Which begs the question – what the hell is going on these last four games?

“I think it’s the collective effort with having Sherman Lewis here,” said wide receiver Devin Thomas. “I think it takes a little bit of pressure off of Coach Z and allows everybody on the staff to work together to really utilize what we have. Also, with so many guys being injured, it gives young guys a chance to be put into spots where they can excel.”

That’s interesting. Have you noticed a difference in the plays being called or maybe a shift in the team’s offensive philosophy since Lewis came to town?

“Yeah, it seems like there’s more structure to it and more of a scheme based on going against what defenses are showing us and finding holes in it,” Thomas said. “I think we’re doing a good job with that. We’re getting better in the red zone and we’re building our confidence on the offense.”

You realize that the move to bring in Lewis turned into a national story, with so-called experts making fun of you guys for bringing in a bingo caller, right?

“That’s fine. It’s bingo that he’s here,” said Thomas. “It’s a good thing having him here. He’s really helped us out. He’s been away for a while, but he’s warming up. I don’t know about the situation after this season, but for the last four games, we’ve really continued to get better each and every game.”

From there we headed over to Malcolm Kelly to get his thoughts on the team’s recent offensive improvements.

“I think the offense kind of had a change of pace when he got here,” Kelly said of Lewis. “I noticed it that first Monday night game, when we put up 17 points or whatever it was. Ever since then, we’ve been able to do more and more. He knows what he’s doing, man. He’s called plays for some of the best. He’s been a major part of it. I can’t say if he’s been everything, but he’s definitely been a major part of it.”

Although it was tough for him to accept, do you think it’s helped Coach Zorn to have Lewis here?

“It probably has,” Kelly said. “It probably took a little off of his plate, so now he’s focused more on Jason’s game, and Jason’s game has also improved. I guess it has. I really don’t want to be the one to bad mouth anyone.”

Have you noticed a difference in the tendencies of when a play is called or maybe even what plays you guys are running?

“I think we’re setting a lot more stuff up,” said Kelly. “We run, run, run, run and then go play action. We go short, short, short, short and then go deep. It seems like he really knows how to set stuff up and put us in the right situations. It’s crazy because a lot of the plays we’re running, they’re the same plays – they’re just tweaked a little bit. Either we’re sending someone out wide on a split or instead of having someone go five yards, now they’re going seven or eight. We’re making small adjustments and it’s changing the whole play.”

Seriously, this guy was a punchline when he got here. And now, you and Devin are telling us he’s the real deal …

“He’s more than the real deal,” Kelly said. “Everybody was talking bad about him, asking ‘how can a guy who has been calling bingo for the last couple years come in and call an offense?’ Well, he came in and did it. He’s still doing it. I don’t doubt the man. He’s got so much insight on the game, it’s crazy.”

Okay, the way you’re talking, it sounds like the best is yet to come with this offense. What’s got to happen to take this to the next level and actually walk away with some wins?

“I think if we keep on executing, sooner or later it’s going to happen for us,” said Kelly. “The last two weeks, we’ve really been in the game. We had control of the game until the very end. Earlier this year we couldn’t move the ball, and now we’re moving it. Then, as the season went on, we couldn’t score. Now we’re scoring. Now we’ve just got to finish it off.”

How frustrating is it to see what this offense can do as everything is starting to come around against quality opponents after struggling against lesser teams for the first two months of the season?

“It’s real frustrating,” Kelly said. “We were talking after last week’s loss. If we were just a team full of nobodies and guys who have no talent and we expected to lose, maybe it wouldn’t be so frustrating. But when we’ve got these guys out there battling all game, controlling the entire game and then losing it in the end – that’s the most frustrating part of it all.”

After walking away, we couldn’t help but wonder “what if?” What if the team had brought in Lewis during the offseason? What if the entire offense hadn’t been decimated with injuries? What if the Redskins opened the season against quality opponents and then had some of the softer teams scheduled for later in the season?

None of it does any good, but seeing the offense finally show signs of life really brings up more questions than answers for us.