deangelo hall is not a problem child 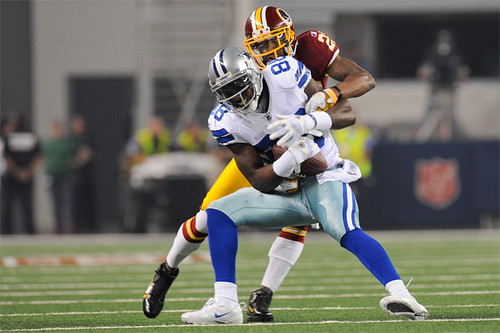 One thing was immediately apparent in the post-game locker room following the Washington Redskins disappointing 18-16 loss to the Dallas Cowboys on Monday Night Football – the players took this loss personally.

Tight end Chris Cooley called the entire week leading up to the game “a waste.” Safety LaRon Landry was so dejected – even though he had just returned to action for the first time in 10 months – that he said he could barely even bring himself to shower.

And then there was cornerback DeAngelo Hall.

As I wrote previously, Hall was so frustrated as turned the corner into the Washington locker room, he stripped off his jersey and shoulder pads and slammed them to the ground as violently as possible.

Moments later, he sounded off on everyone from the game officials, for the 15-yard face mask penalty called on him on a pivotal 3rd-and-21, to his defensive coordinator Jim Haslett, for what he considered “playing with fire” by sending the house so frequently.

Next thing you know, folks are lining up to crucify Hall – with some taking things to the extreme by calling the Pro Bowler the team’s “next problem child” and insinuating he’s an Albert Haynesworth-caliber headache in the making.

The people who write this, of course, don’t know what they’re talking about.

This drivel comes from someone who doesn’t actually cover the Redskins and who is simply taking Hall’s heated comments in the moments after a loss (he was directly responsible for) and drawing extreme conclusions.

Hall was never far from controversy in Atlanta and Oakland, so naturally this is just more of the same from one of the league’s most overrated players, right? It’s another case of “MeAngelo” Hall showing his true colors, right?

Anyone who suggests otherwise is simply hoping to stir up drama or is too lazy to come out and see the situation themselves.

For starters, Hall is a captain on this team. He’s well respected in the team’s locker room. He’s someone who goes out of his way to mentor young players in the secondary like Kevin Barnes and Macho Harris.

He’s not someone refusing to play the position his coaches ask him to. He’s not skipping OTAs or getting into off-the-field altercations involving strippers and/or road rage.

In fact, before his comments involving the Cowboys game, the last words written about Hall were that he and linebacker London Fletcher were the first two players to step up and say that the team should forgo “Victory Monday” in hopes of building momentum after their victory over the New York Giants in the season opener.

Does that sound like an out-of-control player who only cares about himself?

Here’s the other thing I can tell you about Hall – unlike others in that locker room,* he is always willing to stand up in front of the media after every game and answer every question asked of him. Even after disheartening losses like this one, Hall makes himself available to ensure media members (like me) are able to do their job.

As a Redskins fan, do I wish Hall had taken a deep breath and given himself a few extra moments to compose himself before going off on anyone and everyone he could think of? For sure.

And would it have been better for everyone involved if he would have held off on questioning his defensive coordinator until he was behind closed doors? No doubt.

Unfortunately, that’s just not how it played out. It doesn’t mean Hall is now suddenly a cancer in the locker room. It just means he had a momentary lapse in judgment.

“I might have been a little overzealous. You guys know me – I’m passionate about football,” Hall said on Wednesday. “I definitely feel that was a football game we should have won. I was pretty frustrated. The Cowboys might actually send me a bill. I broke a couple of things down there, so I don’t know if I’m going to get billed for that.”

When the Redskins team plane arrived back in town at 4:30 a.m., Hall was still not over the loss. He could barely sleep that night and was back at Redskins Park at 8 a.m. to get an early start on breaking down the film.

On Wednesday, head coach Mike Shanahan was asked to comment on his “next problem child.” Drama queens hoping to make sweeping conclusions from a distance might want to skip this part.

“I’ve said some things after the game that I would like to have back,” Shanahan said. “Usually, when you’re in the business for a while, you learn to keep the emotions inside of you at least for 24 hours and then you can come back and say some different things. That’s the nature of our job and you live with it.

“He’s a competitor and a lot of people speak very freely,” he continued. “Sometimes it’s the right thing and sometimes they come up to you and say ‘hey, I apologize for what I said and that I didn’t mean it. I’m a member of this team no matter what is called. I’m going to go out there and perform to the best of my ability.’”

Does that sound like anything Shanahan ever said in defense of Haynesworth? Of course not.

And that’s because Hall is nothing like that disgruntled malcontent. Haynesworth’s issue was he only cared about two things – getting paid and looking out for himself.

Hall isn’t anything like Haynesworth. He’s the guy who took less money after he got cut by the Raiders to come to Washington, because it was where he considered home.

Instead of talking like an emotionless robot after a game, he’s passionate because he gives a damn whether this team wins or loses.

I want players who care on my favorite football team, and it’s clear that Shanahan seeks out players with that same trait as well.

Hall might want to think twice before publicly questioning in-house business, but the day he stops wearing his heart on his sleeve is the day he needs to find a new gig. Until then though, I’m more than happy to see him rocking the burgundy and gold.