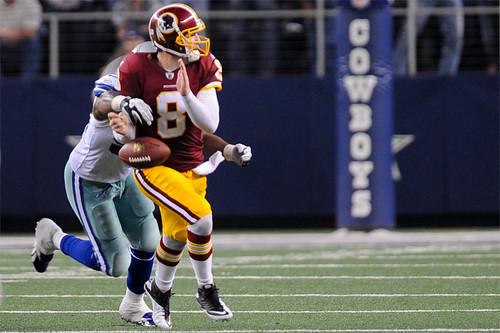 1. “Who’s Gonna Save My Soul” by Gnarls Barkley

Washington Redskins cornerback DeAngelo Hall was so frustrated in the moments after his team’s fourth quarter collapse to the Dallas Cowboys that he couldn’t take it anymore.

As Hall turned the corner into the Washington locker room, he stripped off his jersey and shoulder pads and slammed them to the ground as violently as possible.

Ten minutes later, when the media was finally admitted into the post-game locker room, Hall was still steaming.

He went off on the official who called him for a back-breaking 15-yard penalty for allegedly grabbing Cowboys receiver Dez Bryant’s face mask.

Hall then sounded off on his defensive coordinator Jim Haslett’s decision to blitz both safeties on 3rd-and-21, leaving the cornerbacks alone in coverage on the game’s decisive play.

While most of his teammates did a better job conceiling their frustrations, it was clear that the Redskins were left searching for answers after falling to the Cowboys 18-16 on Monday Night Football.

The truth is, the Redskins defense does have a legitimate reason to be more than a little cranky after this game.

Any time you keep an opponent out of the end zone, you’re supposed to win the ball game. Dallas failed in all three attempts in the red zone – even bumbling away a golden opportunity when the Cowboys had the ball on the 2-yard line.

But six field goals were enough on this night because the Washington offense never really got things going.

Look at it this way, after running back Tim Hightower scored on a one-yard touchdown pass from quarterback Rex Grossman to go up 16-9 in the third quarter, the Redskins offense never made it past midfield the rest of the game.

The offense never looked comfortable. The passing game, which has been a joy to watch so far this season, looked out of synch.

The potent ground game, led by Hightower and rookie Roy Helu, was missing in action.

The offensive line, which had fared well for the most part in the team’s two wins, never created any lanes for the running backs.

And Grossman was flustered by an aggressive Dallas pass rush enough to turn the ball over twice – and he probably should have been picked off two more times because he kept trying to force passes to receivers who weren’t open.

Basically, it didn’t really matter who had the ball. No one looked prepared to take on a hated divisional rival on primetime television.

And for reasons that are only clear to him, offensive coordinator Kyle Shanahan opted to throw the ball on 14 of Washington’s last 16 plays, which might make sense if the team wasn’t … you know … leading the game for the bulk of those snaps.

I don’t pretend to know more than the younger Shanahan, but giving the football to your running backs to run out the clock inthe late stages of the fourth quarter when you have a lead is the first lesson they teach in Football 101.

Throwing that often – especially when your quarterback has a well-earned reputation for turning the ball over – is a recipe for disaster.

Grossman is at his best when he’s managing the game. He’s someone who needs the rest ofthe other offensive players to help share the load.

Once Dallas figured outthe Redskins had given up their ground game, they were then happyto turn up the heat on Grossman.

And once that happened, it was all over for the burgundy and gold. Here’s hoping the coaching staff does a betterjob in the future of playing to Grossman’s strengths and hiding his weaknesses.

Otherwise, things could get ugly in Washington sooner rather than later.

Give Dallas credit, they were the first team to make return specialist Brandon Banks a nonfactor in a long, long time.

But that’s only part of the story for the Redskins’ special teams unit.

For the second time in three games, the Redskins had a field goal attempt.

This time around it was because punter Sav Rocca couldn’t get two hands on a simple snap, but the truth is these guys continue to take easy points off the board because of self-inflicted wounds.

The Cowboys didn’t do anything special. The Redskins special teams unit simply cannot execute on a consistent basis.

Should kicker Graham Gano get the blame, considering he’s been far from clutch during his time in Washington? Or Rocca, since hewas the player who botched things up this time around?

Honestly, both are fine candidates. But for me, special teams coach Danny Smith is the guy I’m holding accountable.

Considering just how often his players make bone-headed mistakes, that points to a lack of coaching. If he can’t get his players to perform on a more consistent basis, then at some point the front office is going to have to consider bringing in someone who can.

After all of the hand wringing, the Redskins are still 2-1. They’re tied with Dallas and the New York Giants for first place in the NFC East* and have a winnable game against a downtrodden St. Louis Rams team next on the schedule.

If the Redskins can get their act together and put together a full 60-minute performance on offense, defense and special teams, the team will be in solid shape heading into the bye week. Sure, it’s never easy watching a loss to a divisional opponent — especially the Cowboys on primetime television — but if someone said before the season that Washington would be 3-1 after the first month of the season, I can’t think of a single ‘Skins fan who wouldn’t have jumped at it.

A win next week means everything’s back on track. Of course, if the Redskins fall in St. Louis for a second-straight season … well … let’s just hope it doesn’t get to that.