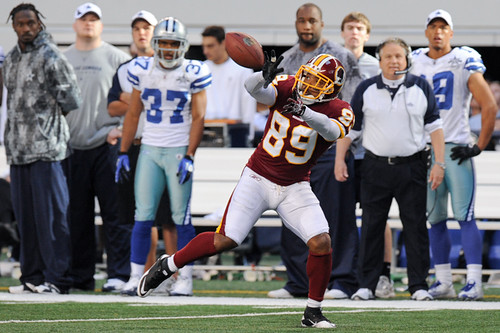 [Editor’s note: This is part two of an exclusive one-on-one interview with Redskins receiver Santana Moss. To read part one, please click here.]

Twice during the first two weeks of the 2011 season, the Washington Redskins have opted to keep the offense on the field and go for it on fourth down.

In both instances, the ball was put in the hands of receiver Santana Moss, and both times the veteran receiver came up huge when his team needed him most.

Washington’s biggest play of the season thus far came on 4th-and-3 in the fourth quarter, when the Redskins trailed the Arizona Cardinals by two scores with just over five minutes remaining in the game.

Rather than turning to kicker Graham Gano, who continues to blow easy opportunities, head coach Mike Shanahan asked his offense to step up and make a play when the game was on the line.

Quarterback Rex Grossman dropped back and delivered a ball to the back corner of the end zone, where Moss hauled in an 18-yard score to pull Washington within two points with 5:17 left in the game.

Perhaps the most impressive part of the play is the fact that Moss swears he wasn’t aware it was 4th down. He was too focused on being ready if the football was thrown his way.

“Did I catch a fourth down pass,” Moss asked after the game. “I didn’t even know. When you’re out there, you’re just trying to make plays regardless of what down it is. I sometimes don’t know what’s going on out of the field. I’m just looking at that play.

“When I’m out there I just go back to thinking about practice and how I did this in practice,” he continued. “How was it when I was tired in practice? Mentally, I’m everywhere, but I’m not worried about the downs or situations. I’m just trying to make a play because my team is calling on me right now.”

Clearly, that mindset has served Moss well, especially against next week’s opponent – the Dallas Cowboys.

In 11 games against Dallas as a member of the Redskins, Moss has 68 catches for 990 yards and six touchdowns.

Some of the 32-year-old’s best performances have come against Washington’s biggest rival, and Moss admits it’s not a coincidence.

“The Redskins-Cowboys games are something I remember watching growing up,” he said. “To get a chance to be a part of that — and to be here with the team I always felt I should be with — it inspired me to go out and play my best against Dallas. I couldn’t tell you why I’m able to have more success against them than some other teams, it just happened that way.

“I don’t really circle that game on the calendar or anything,” Moss added. “It’s just, when those lights come on with a chance to play on the biggest stage — every game is big to me — but for some reason the lights just shine a little brighter when it’s the Redskins and Cowboys.”

It should come as no surprise that Moss’ favorite game of his NFL career came in 2005 against Dallas. He also cites his three touchdown performance against the New York Giants in his first season in Washington and the overtime thriller against Jacksonville in 2006 as other personal favorites.

This past offseason, Moss had the opportunity to leave the Redskins and sign elsewhere as a free agent. In his words though, that was never really an option. But the question had to be asked – why stay in Washington where there is never a shortage of drama?

“The grass isn’t always greener on the other side,” Moss said. “Every team has its drama. We’re in the public’s eye here and with all of the media covering this team you’re going to hear more about the Redskins. But I look at it like this — when you find a place where you can really raise your family and you enjoy going to work, you want to stick around. From my first year to now, I feel like we’ve been able to do a lot of great things. We’ve had some strong seasons with playoff runs, and I know it can be done again.”

While Moss has achieved his greatest success with the Redskins, the same cannot be said for other big-name players, such as quarterback Donovan McNabb, who was run out of town after one season.

“I don’t know, man,” said Moss, when asked why McNabb was unable to play at his typical Pro Bowl level with the Redskins. “I’m still scratching my head about that. Maybe this just wasn’t the best team for him. I think he’s a great quarterback, a future Hall of Famer and still one of the top five quarterbacks in the league.”

Last season, after a tough loss to Minnesota, Moss showed a side most ‘Skins fans had never seen. Clearly frustrated, the veteran was on the verge of tears as he sounded off.

“The people who really know me, weren’t surprised at that,” he said. “If I’m really pissed off, I’m going to speak my mind. Those who don’t really know me think I’m quiet, but I’m really not. I just know when there’s a time to talk and I’m not someone who wants to be seen or heard all the time. At that time, I was just angry and felt like once again we had the game wrapped up. I felt like enough was enough and I wanted the fans to know that these games do matter to me. Every time I’m out here I want to win, so when I hear fans booing and getting frustrated, I just wanted to show them that I care too.”

And what motivates Moss these days, who is playing in his 11th NFL season?

“I honestly believe that I was given a gift that most people aren’t,” Moss said. “That and my family is depending on me to provide for them, so I want to keep going out there and try to win. I feel like as long as I continue to put my heart into this, something good will come out of it. I’ve never made it to a Super Bowl, so I’m just going to keep working hard until I get there.”

While it’s too early to start any kind of Super Bowl talk in the nation’s capital, there’s no doubt that Washington is where Moss’ heart belongs.

“It was very important to come back here,” he added. “My family loves it here. I love this team. I love the city and the city loves me. I never wanted to be anywhere else. I feel like I was always meant to be a Redskin.”