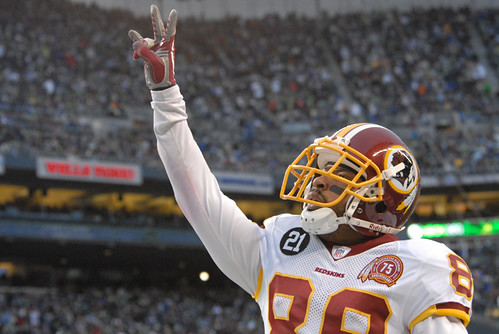 If it was up to Santana Moss, the Washington Redskins would have been the only NFL team he’s ever known.

But, as the University of Miami standout quickly learned, life rarely goes according to plan.

Moss was still on the board when it was Washington’s turn to pick in the 2001 NFL Draft, but the Redskins used the 15th overall pick on a different receiver – Clemson’s Rod Gardner.

The New York Jets selected Moss with the very next pick, and the 5-foot-10 receiver was on his way to the Big Apple.

“The night before the draft, everyone said the Redskins had me at the top of their board,” Moss said. “And then, I guess something changed and I went to the Jets. I wasn’t mad because I got drafted, but once I finally got the chance to come here, it felt like I was finally in the place I needed to be.”

While it wasn’t exactly a secret the Redskins were interested in Moss in the days leading up to the draft, the front office did a good job of holding their cards close to their proverbial chest.

“I never met with the Redskins before the draft,” he said. “I had heard a lot — especially the morning of the draft — but I never got a chance to meet with the team. I just kept hearing that was the place I was going to end up.”

Although he left Miami as the school’s all-time leader in receiving yards with 2,546 yards, ranked third in career receptions (143) and career touchdown receptions list (19), Moss was the fourth receiver taken in the 2001 NFL Draft.

“David Terrell, Koren Robinson and Rod Gardner,” Moss said without missing a beat. “Those are the guy taken ahead of me.

“It was said that if I was an inch or two taller, I would have been the first receiver taken in the draft,” he said. “I think that’s kind of harsh because I think I showed throughout my college career that I can play, even at this size. Now, you see guys my size drafted high all the time. People don’t even think about it anymore — if a guy has speed and can do more than one thing, they get picked high.

“I don’t look back at it like I should have been picked higher,” Moss continued. “I’ve always believed everything happens for a reason and maybe I helped break that stereotype about smaller receivers. I don’t know. I probably had something to do with that.”

After four up-and-down seasons in New York, Moss was traded to the Redskins for wide out Laveranues Coles. While Moss was grateful the Jets were the team to give him his first chance in the NFL, he admits he couldn’t have been happier about being shipped to Washington in time for the 2005 season.

“It really did feel like this was the place that I was always meant to be,” he said. “Coming here really gave me the chance to show the world everything I could be when I have the ball in my hands. In college, I had the ball a lot — returning punts, running reverses and everything. But the Redskins really showed everyone else how to best use guys like me.

“Honestly, I feel like that trade helped re-write my career,” Moss continued. “Those four years in New York were hard because I really didn’t feel involved in that offense. Yeah, sure, I was a guy who could run fast and go deep, but that’s not football. When I got the chance to come here and get the ball in my hands more often it really re-defined who I was as a player in this league.”

Moss isn’t kidding. In his very first season in Washington, he set the franchise’s single-season record for receiving yards with 1,483 yards.

“That’s not easy to do. Not easy at all,” he said. “Things happen in life and make you wonder how you’re able to achieve something like that, and I just feel like I was really blessed, man. I had the right coaching staff, the right kind of quarterback and the right team. They gave me the ball and allowed me to do crazy stuff with it. We were doing slip screens, going deep on the Cowboys … you name it. That was a big year for us.”

All these years later, Moss still can’t believe he had the chance to play for legendary head coach Joe Gibbs.

“He was a Hall of Famer, and when I had the opportunity to play for him, I got to see why,” Moss said. “We didn’t win a championship for him, but we did win some games. There were times when we played other teams who had more talent and we probably shouldn’t have been able to keep up with them, but the way he led us and prepared us, we were able to beat a lot of good teams. That’s what I’ll always remember about him.”

Joining the Redskins also enabled Moss to reunite with fellow Hurricane Clinton Portis, the controversial running back who was the workhorse in Washington for seven seasons.

“Only Clinton knows who the real Clinton Portis is,” Moss said. “He’s got guys who like him, guys who love him and guy who won’t even deal with him. But the guy I’ve gotten to know over the years and everything he can do on the football field, I’ve got to love him.

“He’s someone I enjoyed joking and laughing with,” he said. “Portis is a guy who I hosted during his visit to Miami. Over the years it was great to see him grow and become the running back he was.”

Rounding out the talented trio of Miami players on the Redskins roster was safety Sean Taylor, a misunderstood player who Moss still thinks about often.

“I got to know him a lot more once I came to the Redskins,” Moss said. “Having him in my life, it touched me. People didn’t really know who this guy was and to hear some of the things that people said about him, it hurt because people could have just as easily said the same things about me. He was a guy who loved everybody who loved him. He wasn’t harmful to anyone except when he was on the football field. Off the field he was a good kid who I really feel like was taken from us too early.”

Although it’s been nearly four years since Taylor’s tragic death, Moss continues to draw inspiration from his former teammates each and every week he takes the field.

“It was tough,” he said. “Obviously we didn’t expect it. But I’m going to always play for that guy. He was a guy who loved this game. He was a guy who put his all into this game. Now that he’s gone, he can play through me. I feel like we should all keep his legacy going because on and off the field, he was a good guy who meant a lot to a lot of people.”

Please check back tomorrow for part two of my exclusive one-on-one interview with Moss.