in a ‘fixed race,’ john beck fails to impress 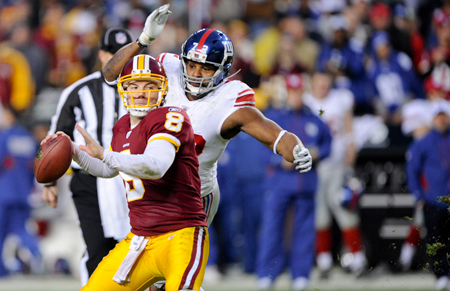 Heading into the final weekend prior to the start of the 2011 NFL season, there was only one question left to answer in regards to the Washington Redskins – who would be the starting quarterback in the season opener against the New York Giants?

Well, if the NFL insiders are to be believed, head coach Mike Shanahan finally made his decision and informed the team’s two signal callers over the weekend that veteran Rex Grossman has (at least temporarily) won the starting job over John Beck.

According to Jason La Canfora of the NFL Network, Grossman earned the right to face the Giants, and the situation will be re-assessed through the year.*

*Which is the polite way of saying Grossman gets the job until Grossman plays poorly enough to lose the job.

As I said last week, I just wanted the Redskins to pick a starter as soon as possible in hopes that whoever was named “the man” would have extra time to try and develop some chemistry with the rest of the offense.

Of course, I would have rather the team made this decision the day the lockout ended, but this is still the Redskins. And let’s be honest – this team never does things the easy way.

While I kept my opinion out of the discussion last week, the truth is I’m more comfortable with Grossman leading the team than Beck.

Why, you ask? Let me explain.

Yes, Grossman is flawed. He’s prone to turnovers and is basically a sitting duck in the pocket for opposing defenses to use as a piñata. None of that is even up for debate.

But he’s also in his third-consecutive season in this offense and is capable of making quick decisions to get rid of the football. There’s no need to worry about him wearing a wristband with the playbook on it because Grossman has been working with offensive coordinator Kyle Shanahan long enough that he’s essentially an extension of the coaching staff.

I’m not trying to say Grossman is the quarterback who will take Washington back to the Super Bowl or anything ridiculous like that. I’m just saying that, in my humble opinion, he’s the lesser of two evils.

I understood the appeal of Beck – he represents the unknown. And the Shanahans basically gave him a chance to claim the job while knowing full well if he stumbled, they still had Grossman ready and able to execute the offense if need be.

But I’ve never been completely on board with Beck as a legitimate option for the role of starting quarterback for one simple reason – the eyeball test.

Whether in practice or the preseason, I’ve just never been blown away by the guy. He might make a nice play here or there, like the sidearm throw to receiver Donte Stallworth against Indianapolis, but those moments are too few and far in between.

Take a look at Beck’s numbers in Washington’s final preseason games of 2011 and 2010.

While the Redskins were happy to rest all of their starters last season against Arizona in the preseason finale and a majority of them against Tampa Bay this year, Beck was given a chance to shine against players who in all likelihood would be unemployed just a day or two later.

And how did Beck fare against Cardinals and Buccaneers backups? He completed 21 of 42 passes for 240 yards with zero touchdowns and two interceptions. That’s good enough to earn the 30-year-old a quarterback rating of 47.7 and bad enough for even the most Shanahan of supporters to have to second guess things.

While a better quarterback would elevate the play of his teammates and take advantage of a defense comprised of scrubs, Beck hasn’t even been able to out-perform such “highly touted” players as Rudy Carpenter and Max Hall.

It’s a shame, really. I’m convinced Shanahan and friends gave Grossman the night off against the Buccaneers to give Beck one final chance to claim the job.

Since Beck missed the preseason opener due to injury, sitting Grossman meant Beck had a chance to pad his stats against a Tampa team that admitted up front they weren’t playing anyone worth a damn.

Once the game was over, Beck and Grossman would have received the same amount of playing time and matching up with Buccaneers backups is a much easier challenge than taking on Pittsburgh’s stout defense in the preseason opener.

But Grossman still managed to win what many thought was a fixed race by completing 34 of 53 passes for 407 yards with two touchdowns, one interception and a QB rating of 92.3.

Beck, meanwhile, completed 30 of 48 passes for 356 yards with one touchdown, two interceptions and a QB rating of 74.7.

So the Redskins coaching staff ultimately decided to roll with The Rex Cannon as they host a banged up Giants team Week 1 and a vulnerable Arizona defense Week 2.

It’s interesting because Grossman is the same quarterback who Shanahan trotted out in the 2010 season finale against these same Giants, and while Sexy Rexy did throw for 336 yards and two touchdowns against New York in that game, he also coughed up the ball three times (two fumbles lost and an interception).

Will he better this time around? I’d like to think so.

If the ground game can get going early and often, Grossman won’t not need to have the ball in his hands as much. The hope is also that the offensive line and receiver rotation are both improved from last year and the defense is actually capable of making a stop or two — something they were unable to do at any point last season.

If everything else falls in place, then it ultimately won’t matter which quarterback is running the show. But because nothing is guaranteed — especially in Washington — the hope is that Grossman can at least do well enough to not lose the game.

After watching the debacle that was the Donovan McNabb Era, the bar has been set low in our nation’s capital. Starting this Sunday, we’ll see if Grossman’s got what it takes.

He’s already surprised folks once in beating Beck for the gig. Anything after that has got to be considered a bonus.