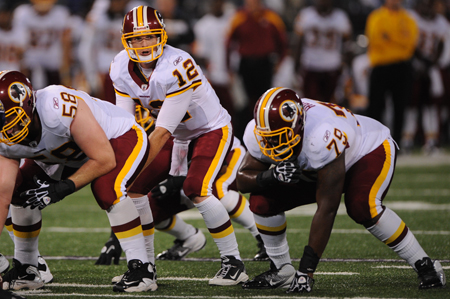 This might sound a lot like common sense to most, but it apparently needs to be said to the powers that be with the Washington Redskins – when building a football team, there comes a point when you must make a definitive decision about your starting quarterback.

Like I said, that’s not exactly earth-shattering news, but the closer we get to Week 1 of the 2011 season, the more I wonder at what point head coach Mike Shanahan is actually going to anoint his starter.

The battle of John Beck versus Rex Grossman rages on tonight in the team’s preseason finale against the Tampa Bay Buccaneers and the coaching staff can’t even decide who’ll get the nod in a meaningless exhibition game.

So far this preseason, Grossman has completed 34 of 53 passes for 407 yards, with two touchdowns and one interception. He’s completed 64.2 percent of his passes and has a quarterback rating of 92.3.

The other competitor, Beck, has been equally impressive – completing 20 of 27 passes for 248 yards, with one touchdown and one interception. He’s completed 74.1 percent of his passes and has a QB rating of 99.0.

Jon Gruden’s take aside, these two guys have both played well enough to make this decision a difficult one. But it’s time for Shanahan and friends to show why they make the big bucks.

It’s time to make the difficult decision so everyone involved move on and adjust accordingly.

And look, I’m not bitching and moaning because the two-time Super Bowl winning coach hasn’t personally informed the media of his decision. Honestly, I couldn’t care less about that.

What I’m much more concerned with is the ability of the other 10 members of Washington’s offense to develop any kind of chemistry with the most important piece of the puzzle.

The longer the Shanahan clan delays the inevitable, the harder it is for the rest of the offense to get on the same page with whichever player gets the nod.

Apparently though, the coaches don’t necessarily agree with my take on this situation.

While it’s nice of the junior Shanahan to believe that company line, it’s unrealistic. We’re not talking about a pickup game of basketball or Caps coach Bruce Boudreau juggling his lines.

We’re talking about football, where consistency and continuity are vital. Every great offensive line has the benefit of the same five guys working together and developing that bond and cohesiveness.

Why wouldn’t the same hold true for the offense in general – especially when we’re talking about uncertainty at the sport’s most important position?

Don’t take my word for it though. Take it from one of the main weapons in Washington.

Left tackle Trent Williams says he isn’t as worried about whoever wins the job, but he openly admits his job is to protect the blind side – meaning he can’t really even see the quarterback most of the time anyway.

“You know what? It doesn’t really matter to me,” Williams said. “They could put Kyle Shanahan back there. I’ve still got to keep him clean.”

That being said, Williams acknowledges that both quarterbacks have different skill sets and therefore require some changes to his game. Beck’s ability to scramble in particular is something the offensive line has to be cognizant of when he’s in the game.

“Most of the time when a quarterback takes off running, it means the play broke down or something,” he said. “It’s not a good thing when we see him take off running. I mean, it’s a good thing that he can improvise and go get yards, but we don’t really want to see our quarterback running. We want him to get his drop and get the ball out.”

It’s funny, so many people this offseason have praised Beck’s ability to extend the play because of his mobility, but his chief protector would prefer to never see him actually use that skill.

That being said, in all likelihood, Williams and the rest of the offensive line are going to have to get used to it because all signs point to Beck winning the job. The man who hasn’t started a game since 2007 is probably going to be the guy who takes the field against the New York Giants in the opener Sept. 11.

Like I said at the top, I don’t have a dog in this fight. I can understand if the coaches feel like they know what they’re getting with Grossman, so they’d rather give Beck a legit chance to sink or swim.

Conversely, I could also understand if the coaching staff feels that Grossman, in his third-consecutive season in this offense, has a better grasp of everything required of him than Beck does.

Either way, I’ll be on board with their decision. I just think the longer this thing drags on, the tougher it’s going to be for the offense to hit the ground running. And for the love of the football gods, once a decision is made, ‘Skins fans better hope like hell they stick with it.

No team with a quarterback-by-committee approach has ever been worth a damn.*

*That might not be a completely accurate statement, but I stand by my belief that this Redskins team cannot win by rotating Beck and Grossman on a game-by-game basis.

The choice is yours, Coach. And the sooner you make it, the better for everyone involved.