simply put, lorenzo alexander can do it all 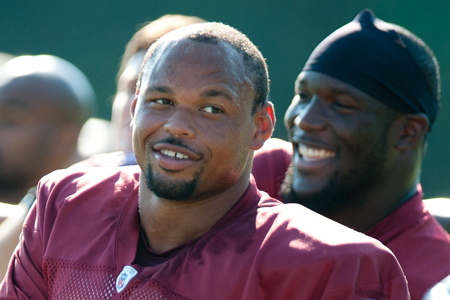 I’ve said it before and I’ll say it again – no player is more valuable to the Washington Redskins than linebacker Lorenzo Alexander.

Sure, other players garner bigger contracts or more headlines, but if the Redskins are to become a consistent winner, it’s going to be because of guys like Alexander.

In addition to being Washington’s most consistent special teams performer over the last four seasons, the 28-year-old has also managed to play guard, tackle, tight end, fullback, defensive tackle, defensive end and linebacker.

I caught up with the man teammates refer to as “One Man Gang” recently to see how he spent his offseason and to try to figure out once and for all if there’s anything Alexander can’t do on a football field.

Alright man, once you got word that the lockout was finally over, how stoked were you to be able to get back out here and put a helmet on someone?

“Seriously, I was ecstatic,” Alexander said. “I was getting that itch while I was just sitting around waiting. It was tough sitting around listening to all that legal jargon, so I’m happy to be out here doing what it is I love to do. I feel like I’m back into my normal flow with the guys playing ball and it’s a lot of fun to be back out here.”

Since you love to spend your offseason like no one else in football, these first few weeks are always spent trying to figure out how you’ve changed your body and what new positions you’re learning. I mean, it’s only a matter of time before you start calling yourself a safety or a quarterback, right?

(Laughs.) “You’re right about that,” he said. “If I keep losing 15 to 20 lbs. each offseason, pretty soon I’ll be playing strong safety or something. You know, the more you can do, the better you are for your team. That’s my role on this team and I’m always trying to create more value for myself. I’m here for them to plug in wherever they need me. We’ve got a lot of great depth at linebacker, so my job is to rotate in wherever they need me.”

I’ve always believed that the more you can do, the harder it is to get rid of you. Obviously you feel the same way, right?

“Exactly,” Alexander said. “Each year they bring in younger guys to take your spot, so the older you get, the more you’ve got to create value for yourself. Teams are always trying to look for someone younger, so I’m just going to continue to be as versatile as possible.”

I need you to be honest with me. Those player-run practices during the lockout were really just an excuse to get out of the house and take a break from your families, right? Were you actually getting anything out of those other than not having to do chores around the house?

(Laughs.) “Nah, nah, nah,” Alexander said. “I was getting something out of it because I was going to inside linebacker. I had Fletch [middle linebacker London Fletcher] out there teaching me, which is why I feel like I wasn’t so hesitant when training camp started. I’m probably a step faster than if I hadn’t started learning the position until I got to camp.”

That makes sense. How sorry do you feel for the rookies out here who didn’t get OTAs or minicamp to learn what’s expected of them?

“Yeah, it’s a whirlwind out here,” he said. “A guy like [rookie linebacker Ryan] Kerrigan was at the player OTAs, but it’s still nothing like seeing it out here at such a fast tempo. And you’ve got coaches and everything is on film, so they can see every mistake you make too. You might think you played it right, but your eyes or feet might have been bad or something. Right now, those guys are just getting a lot of coaching on their technique and everything else, so they’re getting a lot from a lot of different places.”

What are some of the difference between inside and outside linebacker?

“It’s much more cerebral on the inside,” Alexander said. “You’ve got to learn a lot more. Last year I used to give Fletcher a hard time because he’d make the wrong call once in a while, but I understand now just how much he’s responsible for. He’s got to know where everyone’s supposed to be, so if he sees someone is out of position, he’s got to put them there. But once you get it all down, I actually like it more.

“You’re running to the ball more and flying downhill as long as the defensive linemen are keeping the O-linemen off you,” he continued. “You get the chance to really smack a running back, so I like it.”

You know, I’m starting to think you don’t really miss the good old days when you were just an unheralded offensive lineman just trying to hold off whoever lined up in front of you, huh?

“Nooooooo,” Alexander said. “Not at all. I was like 285 lbs., and I had to block guys much bigger than me. I definitely don’t miss those days at all. I like being able to use my athleticism more and I really like to hit people.”

Of course, once the team re-signed inside linebacker Rocky McIntosh, it meant that you’re more than likely going to end up playing mostly back at outside linebacker. You cool with that even though you dedicated your offseason to learning how to play on the inside?

“Yeah, I’m cool with that,” Alexander said. “The coaches let me know that was probably going to happen, but they still wanted me to learn how to play inside. They want me to know how to play outside and play outside. It’s the same old story with me – I’m a swing guy or a utility player. I’ll ball on special teams and fit in on defense wherever they need me.”

Is there any position on the roster you wouldn’t try to learn?

“Not really,” he said. “I mean, if they want me to get back there and try to kick, I’ll do that too. You know, Danny Smith is a great coach. I’m pretty sure if he worked with me, I could hit a 20-yarder.”

Nothing against Alexander, but I’m fairly certain that Redskins fans hope they never have to see a day when he’s lining up to attempt a field goal. That being said, there are still a half dozen other positions on a football team he’s already shown he can handle.