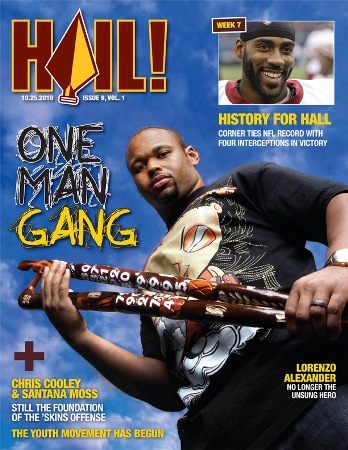 [As you can see, the ninth issue of Hail! magazine, our free digital publication dedicated to the burgundy and gold is now out. Here is a sneak peak of the main feature in this week’s issue — my feature story on Redskins linebacker Lorenzo Alexander, who continues to show on a weekly basis that he’s one of the most important players on the roster.]

Lorenzo Alexander isn’t the face of the franchise and doesn’t own the top selling Washington Redskins jersey. But that doesn’t mean he isn’t one of the most valuable players on the roster.

In his four seasons in Washington, Alexander has made a name for himself as the ultimate team player – willing and able to do anything his coaches ask of him.

He might be listed as an outside linebacker these days, but Alexander should honestly be listed as “Utility Man.” He’s a throwback player – transported from the 1940s and ‘50s when guys played multiples positions all the time – only Alexander is bigger, faster and stronger.

Since joining the burgundy and gold, the 27-year-old has lined up as a guard, tackle, tight end, fullback, defensive tackle, defensive end and a linebacker. Good luck trying to find another player in the NFL who can impact a game from so many different angles. And that’s before we even mention his stellar special teams play.

“There’s not many guys like Lorenzo,” said Redskins head coach Mike Shanahan. “He, top to bottom, is the best special teams player that I’ve ever been around. He’s a guy that makes plays consistently: kickoff, kick return, punt. He’s always got a great attitude. He wants to make every play. He never wants to come out. If he’s not in the Pro Bowl on special teams, I don’t know who would be. We have a lot of people who have the same type of mindset, but not as talented as he is.”

When it comes to football though, Alexander got a later start than most. He didn’t begin playing until his freshman year of high school, but it wasn’t because he didn’t want to.

That meant Alexander’s only taste of football growing up came from pickup games in the neighborhood, where youngsters took to the streets and pretended to be their favorite NFL players.

“I loved Deion Sanders growing up,” Alexander said with a laugh. “He’s my favorite athlete of all time and he caught my attention because he played both ways and was good in several different sports. He had that swag and everything about him was just awesome.”

Once Alexander finally convinced his mother to let him play, he flourished.

Playing for Saint Mary’s High School in Berkeley, Calif., Alexander, like Sanders, excelled on both sides of the football. As a guard, he was a standout offensive lineman, but he truly turned heads on the defensive line, where he racked up 17 sacks during his senior season.

By the time he graduated, Alexander was a Parade All-American who was considered one of the top 10 defensive linemen in the country. While he had no shortage of college programs knocking on his door, Alexander opted to stay close to home and went to California.

As a defensive tackle, Alexander was a productive four-year starter for the Golden Bears. When it was time for the 2005 NFL Draft, he believed he would be selected in the second or third round. Unfortunately for Alexander, things didn’t pan out that way and he went undrafted.

“Everyone was telling me that I was going to be a second- or third-round pick,” he said. “So it hurt me to go undrafted. But honestly, that’s why I have my blue-collar approach now. At that time in my life I was a young kid and I kind of got complacent. I don’t think I worked as hard as I needed to, so I use that whole situation to fuel me today. Never again will I look back and say to myself, ‘You know, I probably could have worked harder.’”

The Carolina Panthers, Buffalo Bills and San Diego Chargers each offered him a chance to sign as a rookie free agent, with Alexander ultimately deciding on Carolina. He didn’t make the 53-man roster his rookie year, but he did stick around as a member of the Panthers’ practice squad.

“You’ve got to work hard every day, but you don’t get to play in any of the games,” Alexander continued. “So you don’t get any sort of gratification from it. You’re basically doing grunt work, but it did teach me a lot about the league – especially the politics and, more importantly, what I needed to do to get on the field.”

After the 2006 preseason, Alexander was released by the Panthers. He worked out with Minnesota and was on the Baltimore practice squad for a week before being cut again.

“Flying back and forth from California to the East Coast and everywhere else, I was already in the mindset that ‘I can’t live like this,’” he said. “I graduated from Cal and got my degree, so I started thinking I might have to give up on football and start exploring my options. I didn’t want to be one of those guys who was out there trying forever to make a team.”

Eventually, Joe Gibbs took a chance on Alexander and signed him to the Redskins’ 2006 practice squad. Things quickly began to look up as Alexander regularly received work on the offensive and defensive lines.

“That whole year, between playing on offense, defense and special teams, I was on the field for every single snap,” Alexander said. “I would literally stay out on the field for every single rep of every practice. That was easily the hardest season I’ve ever experienced, in terms of what my body went through and everything. I was always beat up and sore, but it was worth it.”

By 2007, Alexander was good enough to make the 53-man roster. At that point, the only question became what position the coaches wanted him to play.