jabar gaffney could be a breakout star 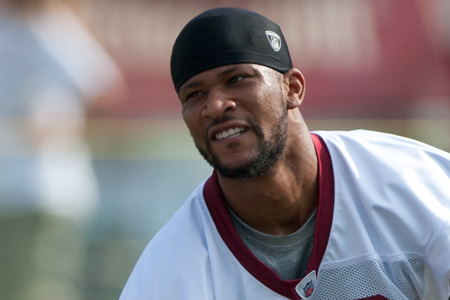 There’s a lot to like about what’s taking place with the Washington Redskins this season.

Management is finally utilizing the draft as the primary way of building the franchise from the ground up as opposed to overpaying free agents. Attention has been given to upgrading both the offensive and defensive lines. And distractions such as disgruntled defensive lineman Albert Haynesworth are long gone.

Unfortunately, the Redskins still appear to have one major hurdle – the lack of a legitimate franchise quarterback.

Head coach Mike Shanahan might fall asleep at night dreaming of the trio of John Beck, Rex Grossman and Kellen Clemens taking over the league by storm, but there aren’t too many other people who feel the same way.

In fact, many believe that Washington’s quarterback situation is so dire that it rivals Miami’s rotation* for the worst in the NFL in 2011.

*Interestingly enough, while even Dolphins fans are mocking the team’s current QB situation – chanting for players who aren’t on the roster every time Chad Henne throws an incomplete pass – Miami is the same team who cut Beck. So if they’ve got the worst quarterback situation in football, but the Redskins are going into the season with someone Miami gave up on, what does that say about Washington?

It’s not unreasonable to believe that if the Redskins could get any sort of consistency out of one of their quarterbacks, that the offense could be worth watching.

The running back rotation appears to have three players worth watching – with Ryan Torain, Tim Hightower and Roy Helu. The receiver corps is much improved from a year ago, when bums like Joey Galloway and Roydell Williams somehow conned a paycheck out of the front office. And tight end remains the deepest position on the team, with Chris Cooley and Fred Davis.

One player in the mix who appears to be a strong candidate for a breakout season is receiver Jabar Gaffney, who the Redskins acquired in a trade with Denver involving defensive end Jeremy Jarmon.

Gaffney might never be a Pro Bowl player, but he’s dependable enough to have racked up 119 catches for 1,607 yards and four touchdowns over the last two seasons.

If he’s able to post similar numbers in his first season in Washington (60 catches for 800 yards and two touchdowns), it’s a safe bet the Redskins will have gotten the better end of that trade.*

*Nothing against Jarmon, but he was never a Shanahan guy. He was drafted by a previous regime for a different defensive scheme, so even though he’s still only 23, Washington was fortunate to get value for a player they weren’t interested in keeping around.

And here’s why ‘Skins fans should be cautiously optimistic about Gaffney in 2011 – with the exception of a few seasons with Tom Brady in New England, Gaffney has never been fortunate enough to play with an above average quarterback.

Instead, he’s been stuck with the likes of David Carr, Tony Banks, Kyle Orton and Tim Tebow for much of his 10 seasons in the NFL. So he should feel right at home catching passes from Beck, Grossman or whoever.

“It was a bit shocking when I first found out, but then it was followed by a bit of relief,” Gaffney said of being traded. “I’m excited to come over here and play for Coach Shanahan and Kyle Shanahan, who I obviously know a lot about from Houston. It’ll be great to play for those guys.”

For those in town who might not be familiar with your game, what type of receiver are you?

“I’m an all-around receiver,” he said. “I take pride in being able to do a little bit of everything. I can get deep. I can go over the middle. I can catch the short stuff and get going with it. I can make my blocks. I can do everything.”

Over the last two seasons, you had some of your best production. How were you able to put together such solid numbers during your time in Denver?

“I was just getting consistent opportunities,” Gaffney said. “That’s all the game is about – getting opportunities and making the best of them. I’m looking for the same situation, if not better, here in Washington.”

There have been several times during training camp where a quarterback throws you a pass that’s a little off target and you’re able to come back to the ball or whatever is necessary to salvage the play. Can Redskins fans expect more of that from you this season?

“Oh yeah, that’s one thing I really pride myself on is catching the ball,” he said. “I hate dropping passes and take it personally when it happens.”

There’s something like a dozen receivers here in camp. What do you guys have to do to stand out when there are so many of you out here?

“There’s always going to be a lot of receivers until they cut it down to the 53-man roster,” Gaffney said. “This is the time for all of us to work together and get better. We’ve got to compete with each other to make each other better and to make the team better.”

Like you said, you’re familiar with Kyle Shanahan from your time with the Texans. How up to speed are you with this offense?

“You’re always learning, whether you’ve been in the same offense for seven or eight years or you’re just starting,” Gaffney said. “There’s always going to be small tweaks that you’ve got to learn. As far as I’m concerned, this is just another offseason.”

As someone who has been in the league for the last decade, what were your thoughts on the Redskins whenever you had to play against them?

“I always knew it was going to be a tough game,” he said. “They were normally known for their strong defense and you’re gonna have to buckle down and play hard against them. I’m hoping we continue that this year, and then we’ll add in some offense. I want teams to know they’re going to have to outscore us as well.”

As I wrote last week, Sports Illustrated’s Peter King boldly predicted 76 catches for Gaffney this season. That’s noteworthy because Santana Moss and Lavernues Coles are the only Redskins receivers to do so since 1990.

When I told Gaffney of King’s prediction and that this feat would place him in such rare company, he instantly smiled and said, “How many catches? That’s my new goal this season.”

Say what you will about the guy, but he’s definitely not afraid of a challenge.

[Editor’s note: For more on Gaffney, click here to read John Keim’s feature story on how the receiver is trying to move on from off-the-field tragedy in Denver.]