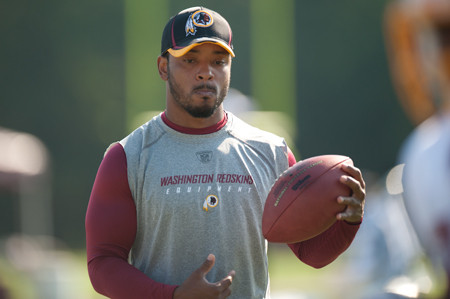 In roughly 24 hours, the Washington Redskins will officially kick off the 2011 season.

Sure, training camp has been going on for a week, but things won’t fully get underway until the entire team – veterans included – is able to take the field and begin preparation for the regular season.

And what, exactly, will this edition of the Redskins look like? Radically different from even a year ago; that’s for sure.

When two-time Super Bowl winning coach Mike Shanahan agreed to take over the franchise, he apparently was operating under the misguided assumption that simply walking through the doors at Redskins Park was enough to make the team competitive once again.

While the 2010 season was littered with “close losses,” the fact is Washington went just 6-10 in Shanahan’s inaugural campaign.

Worst of all, an honest assessment of the state of the franchise showed that the roster was filled with an abundance of aging veterans who were past their prime and precious few playmakers.

Add in the unnecessary drama involving quarterback Donovan McNabb and the constant circus that followed disgruntled defensive lineman Albert Haynesworth and there wasn’t much to be optimistic about.

But that’s the beauty of life in the NFL, where teams are able to turn things around much quicker than in other professional sports leagues. A clear plan, along with a few savvy maneuvers, and a doormat can suddenly become respectable.

Sure, it’s easy to talk yourself into anything during the offseason,* but a quick look at what’s transpired in Ashburn since the lockout ended should really begin to make even the most pessimistic of ‘Skins fans think this regime is capable of putting together an eventual winner.

*A time of year when the Redskins typically are at their best.

For starters, the Redskins are no longer the oldest team in the league. In fact, the Redskins currently have just 10 players who are 30 or older.*

*And that’s counting guys like fullback Mike Sellers, Donte Stallworth and Artis Hicks, who may or may not still be collecting a paycheck once the 53-man roster is announced. Sellers in particular looks like he could be expendable after Shanahan and friends opted to move the former Pro Bowler to tight end, one of the team’s few positions of strength. I think it’s safe to say that second-year fullback Darrel Young is being given every opportunity to take Seller’s job.

Seeing a roster with as many guys who are 22 or younger as guys who are in their 30’s is definitely a welcome change. These are the things that happen when the front office finally decides to apply itself during the NFL Draft.

Speaking of those draft picks, several of those 12 rookies appear to have a legit chance to see action this season.

Without even factoring in first rounder Ryan Kerrigan, who continues to be hampered by injuries, there are at least three draft picks I’m legitimately excited to see in action.

As I wrote yesterday, receiver Leonard Hankerson seems poised to be a solid contributor in the not-too-distant future.

Sure, the receiver rotation is much deeper this year – with Santana Moss, Anthony Armstrong and Jabar Gaffney seemingly locks at the top of the depth chart. But Hankerson is a guy who makes a name for himself going across the middle and that’s something any team would be thrilled to have more of.

Rookie running back Roy Helu also has a chance to thrive here in Washington. The dynamic 22-year-old made a name for himself at Nebraska as a homerun threat, which is something the Redskins’ offense has sorely lacked since the wheels fell off Clinton Portis a few years back.

Ryan Torain will enter the season as the starter, but he’s never a lock to play a full 16-game season. Tim Hightower will likely begin the season as Torain’s primary backup, but there’s little reason to think Helu won’t be able to pass him on the depth chart once he has a full grasp of what the Shanahans expect from him.

And my personal favorite from this year’s draft class might just be defensive end Jarvis Jenkins, who very well could be the team’s stand-out rookie when it’s all said and done. The Clemson product seems to play with a quick first step, and he’s also got the size and speed necessary to excel in this system.

I’m not writing off Kerrigan at all. I’m simply saying that while he’s been sidelined, Jenkins has done everything he can to make people notice. Of all the rookies in town, he’s the guy I’m most looking forward to seeing in live action.

And that’s my point. For the first time in recent history – not to mention the first time since Shanahan took over – ‘Skins fans can simply focus on football.

No one is losing sleep over Fat Albert’s failed conditioning tests or whether or not McNabb is willing to wear a wristband. The only topics of conversation these days involve the on-the-field product.

Sure, even with yesterday’s addition of Rex Grossman, there still might not be an above-average quarterback on the roster. But everywhere else you look, the roster is taking shape.

The front seven of the defense looks to be much improved. The offensive line has been upgraded. The front office hasn’t used free agency to build the best fantasy football lineup that money can buy. They’ve simply targeted a select group of guys around the age of 27 who fill a specific void for this team.

There’s no way around it – the Redskins are officially operating as if they have a clue what it takes to be successful in the NFL. I’m not saying they’re a lock to go 12-4 or even make the playoffs. But they’re definitely in much better shape now than they were a year ago.

The team is younger. The talent pool is deeper. The distractions have been eliminated.

Now, finally, this team has a chance at respectability. Sure, it would have been nice if Shanahan opted for this youth movement a year ago. But as the saying goes; it’s better late than never.

Linebacker Brian Orakpo might have called the Redskins the “boringest” team, but I, for one, can’t wait to see what this year’s team has in store for us.