leonard hankerson is putting in the work 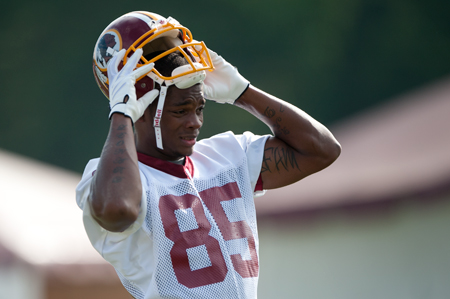 The Washington Redskins did the unthinkable this past offseason – they actually paid attention to the NFL Draft and tried to use it to improve the franchise.

In years past, draft picks were often sacrificed in packaged deals for aging veterans* — but this year Mike Shanahan and friends went the other way and left the draft with 12 new players.

Of the 12 rookies, one player continues to tug at the heartstrings of Redskins fans as if he was Justin Bieber and the burgundy and gold faithful was a bunch of 12-year-old girls.

His name? Leonard Hankerson. His impact in Washington? The sky is the limit.

Maybe it’s the fact that this team has lacked a dependable* option other than Santana Moss at receiver for the majority of the Dan Snyder era.

*Can Michael Westbrook, who jumped a teammate on the sidelines, or Rod Gardner, who dropped every other pass thrown his way, be even remotely considered dependable? I say no.

With that in mind, I sought out the 22-year-old rookie to see if he’s up to the challenge of being this franchise’s next fan favorite.

First of all, welcome to Washington. For those Redskins fans who might not know much about you, can you tell me a little bit about yourself and what you bring to the table?

“I’m a big, physical receiver that loves the game,” Hankerson said. “I’m not afraid to go up and get the ball. I’m a good route runner, and most of all, I love to make big plays.”

You went to the University of Miami, and not only did you do well during your college career, you leave there as one of the top wideouts to play for the Hurricanes. How were you able to be so successful during your time there?

“It’s just all about putting in the hard work,” he said. “You’ve just got to be willing to do what is necessary to get better each and every day. Catching footballs before practice. After practice. Whatever. Just working hard physically and mentally and working with the coaches to learn everything about the offense. I mean, when you put in the work like that, it shows on the field.”

There’s a pretty long line of Miami receivers who have gone on to become big-time players in the NFL. How much does that motivate you to be the next great Hurricane receiver?

“Oh yeah,” Hankerson said. “There’s been a whole lot of receivers who came out of Miami and became playmakers in the NFL. Seeing them motivates me to keep working hard and to keep putting in the time so I can be the next great one on that list.”

Which receivers did you look up to when you were growing up?

“I was actually a Florida State fan and was a fan of Peter Warrick,” he said. “I mean, I watched Miami a little bit, but as far as individual receivers, I watched Terrell Owens. I watched Jerry Rice. Since then though, the Miami guys have gotten better each and every year. Guys like Reggie Wayne, Andre Johnson and Santana Moss are a whole lot of fun to watch.”

I’m going to be totally honest with you. Redskins fans are about as excited about you coming to town as any non-first rounder I can remember in all the time I’ve been covering this team. Clearly there is a need at receiver for a big body who isn’t afraid to go across the middle to make the tough catches. You ready to step up and be that guy here in Washington?

What did you know about the Redskins before you learned that this was the team that drafted you?

“I mean, I didn’t really know much about them,” he said. “I hadn’t talked to anyone here during the draft process, the combine or anything like that. I talked to coach Kennan McCardell one time briefly at the combine and that was it, so I didn’t really study up on the Redskins at all because I didn’t know there was a chance they would draft me. The only thing I knew was that my buddy back home is a huge Redskins fan and a season ticket holder and he always used to talk to me about the team. Once they drafted me, he started telling me more about them and I started reading up on them a little bit …

And that’s how you ended up with the Redskins hat on draft day, right?

“Exactly,” Hankerson said. “That’s how I got all the Redskins gear.”

What’s your relationship like with fellow Miami receiver Santana Moss?

“We’re both from The U and when you’re from The U, you stick together,” he said. “Even though we’ve never played together, that’s how we feel. Now that we’re here together, I know I can go to him and ask him questions because he’s been in this offense for a while now. I’ll ask him any question I come up with along the way and I’m sure he’ll help me out.”

During a normal offseason, you’d have OTAs, minicamp and training camp. Because of the lockout, you’re basically getting screwed out of all of that. Lucky you, right?

“Yeah, it hurts a whole lot,” Hankerson said. “Normally, there would be a next day, so you’d have the time to go back and look at the film before training camp or whatever. But now, it’s camp time and the season is around the corner. We’ve really got no room for error. There’s no time to put things off until tomorrow. You’ve got to go out and do what you’re able to do, study the playbook and spend all your free time here at Redskins Park putting in the work.”

Rookie receivers, on average, have a hard time making a huge impact. With this abbreviated offseason, it’s going to be that much tougher for guys like you to get up to speed and stand out in year one.

“I’ve just got to go at it full speed,” he said. “I need to focus on learning the playbook and go out there and compete. As long as I do all of the little things that are going to make me better, I’ll succeed. That’s what it’s all about.”

If I started a drinking game every time Hankerson used the phrase “putting in the work,” we’d all be tanked by the end of this interview. But here’s the thing – it’s not just talk. This guy truly believes in out-working the opposition.

Talking with people who covered him in Miami gives me the sense that this guy is a self-motivator with impeccable work ethic. He’s not saying what he thinks anyone wants to hear. He saying what he believes and letting ‘Skins fans know how he’s been successful thus far.

Nothing is guaranteed when talking about college players transitioning to the NFL, but Hankerson’s drive and work ethic should give him as good a chance as anyone at making a name for himself at the next level. If that’s the case, then it really is only a matter of time before he becomes a fan favorite.