hankerson could be a steal for redskins 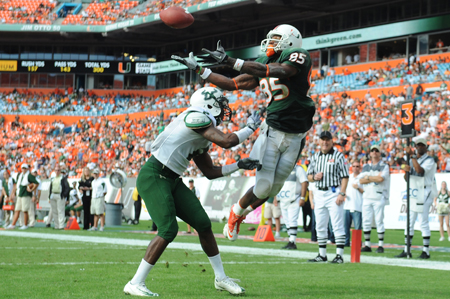 For those who missed it, yesterday we had the chance to chat with Omar Kelly, who covers the Miami Dolphins for the South Florida Sun-Sentinel. Because of how much ground we covered during our conversation, I went ahead and broke it up into two parts.

Today, we turn our attention to receivers and the good news for ‘Skins fans is that Kelly has a lot of positives to say about the guys who’ll be catching passes from Beck, Young, Rex Grossman or whoever. Without further adieu, here’s part two.

Out of everyone the Washington Redskins selected in this year’s draft, the player who seems to get the locals most excited is Miami receiver Leonard Hankerson. What can you tell me about this kid?

“He’s a good receiver and, quite honestly, I’m surprised he didn’t go in the first round,” Kelly said. “I think he’s probably in the best spot for him, considering what their needs are there. Anthony Armstrong is a guy who they had down here on the practice squad. He’s a talented receiver and a nice deep threat, but he’s not going to be an every-down, possession receiver. And then you’ve got Santana Moss, whose time in Washington may be done. It’ll be interesting to see what happens there with him being a free agent.

“But if they’re looking for a new guy to come in and take over, I can see Leonard Hankerson being a 1,000-yard receiver,” he continued. “He’s got everything you need, which is why I was troubled that he went so low in the draft. To me, every question people had about him, he addressed it.

“He’s got speed, toughness and hands,” Kelly said. “He was the one guy who stood out in the Senior Bowl. They said he’s not that fast and then he runs a faster time in the 40 than [University of Maryland wide out] Torrey Smith at the combine, so I’m puzzled why he was there that late. But sometimes I think its better that guys get a good opportunity and land in a good fit, rather than worry about where a guy gets drafted. But I definitely think he’s got Pro Bowl potential.”

I jokingly refer to him as Malcolm Kelly with two good knees because he’s a guy with a big body who isn’t afraid to go across the middle, but at the same time, this team’s recent draft history isn’t exactly littered with guys that could be considered a steal. We’re kind of conditioned to expect the worst rather than get our hopes up, but the more I see of Hankerson, the more there is to like. But I think it’s safe to say you like what Hankerson bring to the table, right?

“No, you’re right. He’s got it all together,” he said. “I can’t really point to any major flaws in his game. I’ve heard questions about his intellect, but I think a lot of that is overblown just because he’s a Miami kid. I’m from Miami and I’m very familiar with Leonard Hankerson and the one thing about him is he works hard. If you go back and look at the receivers he broke the records of, those guys have had very successful careers at the next level and I expect him to have the same success.”

I talked to Santana Moss earlier this offseason and he told me point blank that if it’s up to him, he’ll be back in Washington next season. I believe the exact phrase he used during our chat was “the grass isn’t always greener,” so I guess it’s going to come down to whether or not the Redskins’ front office wants him back.

If they’re able to work things out and go into next season with Moss, Armstrong and Hankerson as the top three guys on the depth chart, what are your thoughts on that receiving trio?

“Yeah, I could see them having a productive season,” Kelly said. “I like Armstrong as a flanker who goes deep, Hankerson as a possession receiver and I’ve always thought that if Santana Moss was put in the slot, he’d be one of the better slot receivers in the NFL. That hasn’t always been his role, but I think he could excel there as he gets up there in age. I still think he’s got a lot of mileage left and I’m excited to see where he lands next if it’s not Washington. I honestly think he’s got a couple more thousand-yard seasons left in him.”

I definitely agree with Kelly that Moss is still a highly-productive player, which is why my top priority as soon as the lockout is lifted would be to get him signed to a new deal. He’s a consummate professional who has always been more than happy to work with young guys and you’d have to think the idea of lining up with a fellow Hurricane like Hankerson would only push Moss to work harder.

The Redskins are still a long ways away from being a championship contender, but heading into next season with Moss, Armstrong and Hankerson is a helluva lot better than another year of Joey Galloway, Roydell Williams and all the other spare parts that didn’t work out.