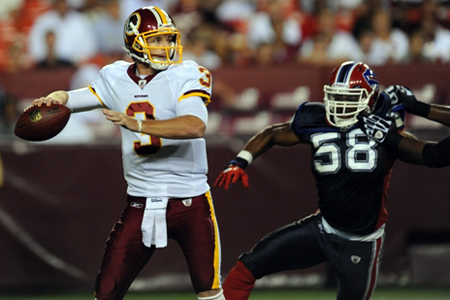 And while the lockout is keeping things quiet in most NFL cities, the Redskins continue to be a regular topic of conversation with three new names consistently emerging during this offseason of uncertainty.

They are John Beck, Vince Young and Leonard Hankerson. A holdover, a free-agent-to-be and a draft pick.

With so many different stories floating around the Redskins these days, I tracked down the one person uniquely qualified to talk about each of these players and more.

His name is Omar Kelly, and he covers the Miami Dolphins for the South Florida Sun-Sentinel. For what it’s worth, he’s also one of the more entertaining individuals I follow on Twitter.

Oh, and if Kelly’s name sound familiar, it’s because he’s the guy who first mentioned that Young could end up in Washington.

Since he’s in Miami, Kelly is able to shed some light on Beck, who was drafted by Miami in the second round of the 2007 NFL Draft, and Hankerson, who just finished up an impressive college career with the Hurricanes.

Kelly was gracious enough to make time for me, so I hope you enjoy his insights into players who very well could decide the fate of the burgundy and gold in 2011.

As someone who is obviously much more familiar with Beck than any of us in Washington, I was hoping you could share your perspective on him. What do you think of the kid?

“I think in time – and he’s now had that time – he might be a decent quarterback,” Kelly said of Beck. “The issues that he struggled with when he was with the Dolphins were partly caused by the changing of the regime. They wanted him to play right away and wouldn’t let him grow at a respectable pace.

“When [executive vice president of football operations Bill] Parcells, [head coach Tony] Sparano and [general manager Jeff] Ireland got here, they were building a team on toughness,” he continued. “And John didn’t exactly personify toughness – especially to them. So it wasn’t a surprise that he didn’t win the job. When they went to Pat White, drafting him in the second round, they dumped the kid before he really had the opportunity to push or gain some footing.

“I admire the kid because he fought back and found himself another home and put himself in a position to try and win a starting job,” Kelly said. “I think now, considering he’s been in the NFL for four seasons, I think he possibly has a chance – especially in a west-coast offense. I always thought he’d be better suited in a west-coast offense.”

When you’re watching Beck on film or from the sidelines, what stands out about his game?

“Well, the decision making wasn’t good then,” he said. “I’m not sure where it is now. He doesn’t exactly play with toughness, but I would say that his intellect was always intriguing. Being able to analyze things, determine matchups and knowing where to go with the ball. He threw a pretty decent deep ball and he’s fairly accurate, which is why I always thought he was suited for a west-coast offense. That’s one thing I would definitely give him – he’s got accuracy on his side.

“Considering he’s had time to learn the offense and he’s spent a season in that system and has time in the NFL as a backup and understudy, I’m optimistic that he can do something respectable,” Kelly added.

Beck is a guy the Baltimore Ravens essentially gave away for a bag of balls, and yet, we’re talking about him being a possible starter one season later and when you hear from Redskins rookies, they say the first player to reach out to them is Beck. Does it surprise you to hear that he’s taken on such a leadership role this offseason?

“No, he’s got that leadership intangible,” he said. “I’ve dealt with Shanahan and I’ve dealt with Beck, and they both have their pros and cons, but I’d definitely say John Beck has high character. He’s also had the chance to learn from veterans like Trent Green and Chad Pennington, and that’s helped. He’s also more mature than most guys, considering he spent some time on that mission. So I can totally see that leader trying to step forward, but in my opinion it all comes down to performance and execution.”

You’re also the guy who first broke the story that the Redskins could be in the running for Young. Are you still hearing that and, if so, what do you think of a Young and Shanahan combo?

“I honestly don’t pay much attention,” Kelly said. “When you hear stuff like that, you sort of say ‘That’s interesting’ and you pass it along. Of course, it set Washington on fire. Vince Young in a west-coast offense could work. From what I understand though, the real teams that are interested will step forward once he’s released and once Tennessee isn’t trying to get draft picks for him.

“And then it’s going to take him some time to learn a new offense,” he said. “I think it would be a challenge for him to learn a west-coast offense considering he hasn’t played in one. But do I think it fits? I definitely think it could for Washington. And I’ve heard all the stuff about Jeff Fisher and Mike Shanahan are friends and that Fisher wouldn’t endorse Young, but I think a lot of that is overplayed and overblown.”

If they did acquire Young it wouldn’t bode well for Beck, would it? You wouldn’t expect them to bring in a guy like Young to ride the bench, would you?

“Well, Beck is familiar with their offense,” he said. “He has a season in that offense and has been groomed in Shanahan’s system. But I can’t sit here and say that. Vince Young is a superior talent. He’s a two-time Pro Bowler.

“The interesting thing about the whole Vince Young dynamic and I deal with it down here in Miami, young Pro Bowl quarterbacks don’t just fall off the wagon,” Kelly said. “They don’t just get thrown to the curb like this that often. The last time it was done was Mike Vick and no one wanted to touch him then, but look what he’s turned into now.

“I think Vince Young has that kind of potential – especially if he plays for a team that gives him an opportunity to redeem himself and rebuild his image,” he said. “The question is who will give him that opportunity and who wants to work with him. But in terms of coming in and immediately being named the starter, I don’t know if that’s realistic considering he’ll likely be cut 10 days into the NFL’s new season. On that short of a timeline, I’m just not sure that Young is that type of a student to grasp an entire offense in a month.”

Because this is there’s so much to talk about, I’m going to break this into two separate features, so please check back tomorrow for part two, where we talk about Hankerson, as well as the rest of the Redskins receiver corps.