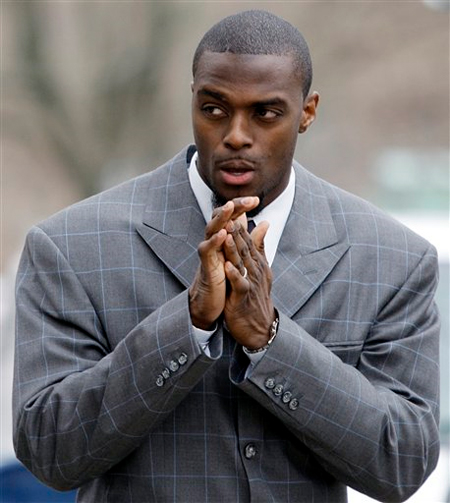 Yes, the guy is finally out of prison after shooting himself in the leg and yes, he’s ready to return to football if the lockout ever ends, but his next paycheck isn’t coming from the Washington Redskins.

So if you’re one of the ‘Skins fans out there lobbying for the front office to roll the dice and bring in the nine-year pro, it’s best that you find a new hobby.

Don’t get me wrong, I understand why some folks out there have talked themselves into Burress being just what this offense needs. After all, we’re talking about an offense that finished 18th in yards and 25th in scoring last year.

And honestly, the Redskins receivers from a year ago weren’t exactly making people forget about the Fun Bunch or the Smurfs.

Things were so bad that receivers not named Santana Moss or Anthony Armstrong combined for just 25 catches, 339 yards and zero touchdowns. (You know it’s bad when Joey Galloway is the most productive person in the discussion.)

Although I firmly believe Moss will be back in Washington, there’s still a chance he ends up elsewhere next season. That thought alone should be enough to make the front office consider anyone and everyone out there.

But let me tell you why Burress won’t be playing in Washington – The Donovan McNabb Experiment.

Because the McNabb trade was such a colossal flop (not to mention the failures of other aging veterans such as Larry Johnson and Willie Parker), the Redskins finally seem ready to embrace a youth movement.

That’s why they were happy to trade back on draft day and acquire extra picks. That’s why they walked away with 11 new players – including three receivers and seven offensive rookies overall.

The Redskins brain trust finally seems ready and able to embrace what the rest of the NFL has always known – building through the draft is the best way to enjoy sustained excellence.

If you skimp on the draft and focus all of your efforts on free agency and trades, you end up with a top-heavy roster of aging vets with no depth. But if you dedicate your time, energy and resources into the drafting process, you’re much more likely to end up with a balanced roster that can actually survive when a starter or two gets injured.

That’s why there is so much excitement around rookie wide out Leonard Hankerson. He’s a guy with an impressive resume from a school known for churning out stud receivers.

If half of Hankerson’s skill set translates to the NFL level, the Redskins will have their best homegrown receiver in more than a decade. And think about the money allotted to a third-round pick, as opposed to breaking the bank on a free agent.

He’ll cost a fraction of the price, which allows the team to spend more money on some of the other glaring needs (can you say offensive line?)

And I’d be remiss if I didn’t bring up the elephant in the room in this discussion – the fact that Plaxico is a high-maintenance drama queen.

Jay Glazer is on record as saying Burress was fined somewhere between 40 to 50 times during his four seasons with the New York Giants. Sure, he helped the Giants passing attack by providing a big target in the middle of the field, but he was also a huge distraction off the field.

Does anyone honestly think what the Redskins need now is another selfish player who makes headlines for all the wrong reasons?

For the same reasons I think Washington should avoid Vince Young at all costs, I think it’s best if the Redskins let Burress take his talents elsewhere – they’re in no position to take chances on players with character issues.

Albert Haynesworth is in a class by himself when it comes to being a problem child, but look at someone on the other side of the spectrum – look at a guy like McNabb. He’s universally respected across the NFL, but by the end of last season he was basically relegated to punchline status.

The team mismanaged everything about the McNabb situation to the point where fans should really hope they completely reevaluate and revamp their decision-making process.

If Mike Shanahan and friends can botch things so badly with McNabb, I shudder to think how dire things would get with a confirmed knucklehead like Burress. Think about this: McNabb was too classy to get into a war of words with management as they benched him and continually found ways to trash the 13-year pro.

Does anyone really think a guy like Burress is capable of being a good team player the first time adversity strikes? Does anything in his body of work in Pittsburgh or New York point towards that happening? And most importantly, is there a single person alive who thinks the Redskins are at a point where they can handle a problem child like Plaxico?

I’ll leave you all with this – a friend of mine had the “pleasure” of getting to know Burress during his time at Michigan State. Well, the first time he heard me joking that the Redskins should hire a lawyer to get Burress out of jail early so he could be the big target Washington has lacked for years, he sent me the following message:

“Helluva talent. Dumbest person I’ve ever met. Wish I could have bet on him shooting himself.”

If that doesn’t tell you everything you need to know about Burress, I don’t know what will.