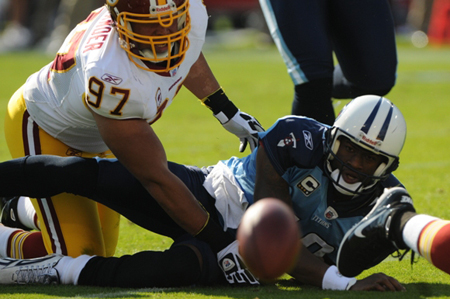 [The topic Redskins fans continue to fiercely debate these days is whether or not the team should acquire Vince Young. This post is dedicated to why Washington should avoid Young at all costs. To read the opposing stance, courtesy of John Pappas of Skinscast, click here.]

When last we saw quarterback Vince Young he was having a meltdown on the sidelines of a Tennessee Titans game that can only be classified as epic.

During an early-season contest against the Washington Redskins, Young suffered a torn flexor tendon in his thumb.

Titans coach Jeff Fisher thought the injury was serious enough that he opted to sit Young for the rest of the game – which the Redskins won 19-16 in overtime – and this didn’t sit well with the former Texas Longhorn.

As he was leaving the field, Young threw his shoulder pads into the crowd and then stormed out of the locker room in a hissy fit.

For his actions, Young was benched the final six games of the season.

In January, Titans owner Bud Adams announced that Young was no longer in the team’s plans, which means he’ll be playing elsewhere in 2011.

It goes without saying that if you’re a big name in the NFL and you’re looking for a new home, at some point you’re going to be linked to the Redskins.

So naturally, folks are already suggesting Young could end up in Washington as Mike Shanahan’s next signal caller.

And while this is merely speculation on the part of folks waiting for the NFL lockout to end, the question remains – should the Redskins roll the dice with a talented, but troubled player like Young?

If Shanahan and friends know what’s good for this franchise, they’ll look the other way when it comes to Young. Not because he’s a bad person.

I mean, none of us in the D.C. area really know him so it’s impossible to say, but the Redskins should do the smart thing and avoid Young at all costs because he falls into the category of “character issues.”

You might have noticed that last season was a catastrophe for the Redskins.

After thumbing his nose at the mere notion of a rebuild, Shanahan guided an over-the-hill roster to a 6-10 record.

His quarterback during year one in the burgundy and gold was Donovan McNabb – one of the most accomplished and respected players in recent history.

There’s no need to dwell on how many different ways the Shanahan-McNabb combo failed ‘Skins fans, but suffice it to say that things didn’t go according to plans.

And say what you will about McNabb, but there’s one thing no one can argue – even when things got ugly last season and he got demoted to third string, he never rocked the boat.

He never ran his mouth. He never had a temper tantrum. He never pointed a finger at others.

McNabb remained a professional and did what he thought was best for the Redskins.

How do you think Young would react if he found himself in the same scenario? Oh yeah, he’d throw his equipment in the stands and storm out of the stadium.

This Redskins team is not capable of dealing with adversity. When the going gets tough, this team folds like a house of cards.

Even a guy with two Lombardi trophies like Shanahan couldn’t prevent a head case like Albert Haynesworth from becoming a season-long distraction.

Off the top of my head, I can recall exactly two players in the last 35 years who came to town with “character issues” but panned out. John Riggins and Daryl Gardener.

Riggins played nine seasons in D.C. and is the standard ‘Skins fans hold all other running backs to, while Gardener lasted just one season under Steve Spurrier.

If these are the only two questionable veterans the Redskins rolled the dice on who didn’t come back to haunt them, then why on earth would anyone think Young is a good idea?

To read the case for the Redskins acquiring Young, click here.