the case for vince young in washington 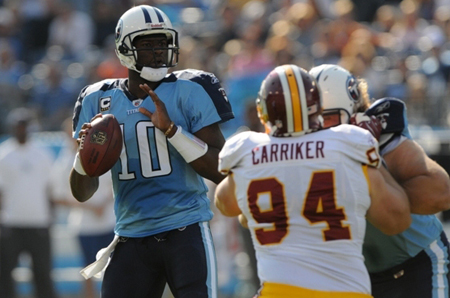 [The topic Redskins fans continue to fiercely debate these days is whether or not the team should acquire Vince Young. This guest post from John Pappas of Skinscast is dedicated to why Washington needs to make this happen. Click here for the other side of the debate.]

Following the 2011 NFL draft, two things are apparent regarding the Washington Redskins: they didn’t draft a quarterback, and they still need one.

For my money Vince Young is the guy to get. In fact, it makes so much sense I’d be disappointed if Washington ends up with anyone else.

Young is the type of passer that coach Mike Shanahan covets; a big-armed, mobile playmaker. His arm-strength and ability to run represent a dual-threat to defenses.

Entering just his sixth year in the league and at only 27, he is in his prime. And at 6-foot-5 and 232-pounds, he is built to withstand the punishment that comes with the position.

Best of all, Young is a winner. His 30-17 record as a starter testifies to this, and far outweigh concerns over average passer stats.

Under contract with Tennessee, Young is expected to be traded or released as soon as free agency begins.

Some believe Young a head case with questionable character following a bumpy ride in Tennessee. This shouldn’t dissuade the Redskins. Young can be gotten at a reasonable price and a new start in Washington may turn him around. With the potential upside, it is a gamble worth taking.

Besides, Washington has to do something.

You can help yourself to the subterfuge soufflé served by Shanahan in his praise of four-year journeyman John Beck.

But on the heels of 6-10 and another last place finish in the NFC East, I don’t see Uncle Mike tossing the keys to the billion-dollar franchise to a guy who has three times more interceptions than touchdowns and a record of 0-4 as a starter in the league. Not to mention “the kid” hasn’t started a game since ‘07 and will be 30 in September.

Then there’s Donovan McNabb. Since joining the Redskins in 2010, the reports out of Ashburn paint him as either lazy, stupid, out of condition or too proud to learn the system – take your pick.

Couple this with McNabb’s benching late in the season and the divorce seems certain. For his part, McNabb has been working out with Larry Fitzgerald and other Arizona players, not that he has a preference for a new team or anything.

But before we move off Shanahan’s tacit suggestion Beck will start, let’s consider what else we have to believe in order to accept the premise. Washington has two quarterbacks on the roster: Beck and McNabb.

If we accept Beck will be the starter, will McNabb remain as backup? If so, the Redskins will be handing him a $10 million bonus check no later than the start of the season. Then he gets another $1.75 million in salary. That is, unless McNabb renegotiates less money to not start.

In which case McNabb leaves and Washington has to hit free agency or make a trade to find a second quarterback. Under this scenario, the team will naturally try and get the best quarterback available. For Beck to wind up as the starter, he will have to win the job from whomever the team brings in.

The free agent list includes marquee players such as Payton Manning, Michael Vick and Brett Favre. Manning and Vick will not be available (both already franchised) and Favre has retired, probably for real this time.

It is difficult to make the argument that Beck is better than even a portion of this group. Almost all have started more and won more in the league. Aside from Manning, Vick and Hasselback, you can make that argument of Young.

His win-loss record alone puts him in their company. Add to this his size, strength, age and what should be a reasonable asking-price, and you have the obvious choice for Washington at quarterback.

To read the case against the Redskins acquiring Young, click here.