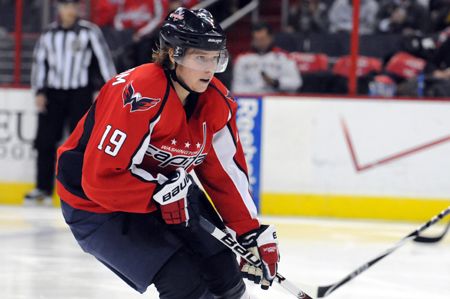 There are a lot of takeaways — both positives and negatives — for the Washington Capitals after their opening-round series against the New York Rangers in the Stanley Cup playoffs.

On the plus side, Caps goalie Michal Neuvirth looked to be in complete control throughout the five-games series and seems poised for yet another successful postseason in North America.

The defense as a whole continues to excel as the Capitals prove they’ve happily embraced the new defensively responsible philosophy.

Washington was also able to seize control of this series faster than any other time since coach Bruce Boudreau took over, which was a nice change of pace.

On the flip side, no one is sure how seriously veteran forward Mike Knuble’s hand injury is or when he’ll be back in the lineup.

The head of defenseman Mike Green continues to be targeted by opposing teams as he recovers after missing 22 games earlier this season to a concussion.

And while the double overtime comeback made for great theater, the guys in that locker room should know better than to play with fire by sleepwalking through the first 40 minutes of a game like that. More times than not, that lack of effort is what sends teams home early in the playoffs.

But for my money, the two biggest subplots after the first round of action are centers Nicklas Backstrom and Marcus Johansson — two gentlemen from the same country who share the same position.

One played out of his mind in his first taste of the NHL’s postseason, while the other has yet to make his impact on the stat sheet.

Johansson, a 20-year-old rookie, continues to impress every time he hits the ice. After a slow start to his rookie campaign, the Landskrona, Sweden native finished the regular season with 13 goals and 14 assists for 27 points in 67 games.

Good, but not great.

In the playoffs though, the speedy Swede has stepped up his game – with two goals and two assists for four points in five games.

If there is such thing as a “rookie wall,” he hasn’t been introduced to it yet. And if he’s supposed to be cracking under the pressure of his for NHL postseason, no one’s told MoJo yet.

“I’m enjoying every minute out there,” Johansson said. “It’s been a lot of fun, especially when we’re winning games. I think if we continue to play like this in the playoffs, we’re going to be okay in the long run.

“I’m playing with good players all the time and getting a lot of ice time,” he continued. “The more you play, the more comfortable you get.”

While Johansson is a smooth-skating forward who looks at ease with the puck, he’s also someone who knows the value of a greasy goal in the postseason.

“It doesn’t say on the sheet if it’s a pretty goal or not,” said Johansson, who was credited with his second goal of the playoffs when defenseman John Carlson’s shot deflected off his glove and into the net. “It doesn’t really matter how it happens, the puck just needs to go in the net.”

Johansson’s inspired play against New York definitely caught the attention of his teammates.

“I think he was great,” Backstrom said. “I think he’s been developing really good over the last year here. He has such good speed and it gives him a big advantage because he’s so fast.

“It’s a big adjustment, coming from back home,” Backstrom said of his fellow countryman. “It obviously takes a couple games, but when he began to feel more comfortable he started playing really well. I’m really glad to see that. Hopefully he can keep going.”

While Johansson has contributed just under a point per game thus far, Backstrom has not been as productive. The 23-year-old standout has just one assist through five games, even though he spends the bulk of his time playing on the top line with Alex Ovechkin – the team’s top point scorer.

Backstrom has 12 goals and 18 assists for 30 points in 28 playoff games prior to this season, so when he all but vanishes from the scoreboard, it’s difficult not to notice.

“As far as points and those kind of things, it’s not been that good,” Backstrom said of his play in the first round. “But at the same time, I don’t really care about points right now. As long as the team is winning, I don’t care who scores. I can definitely do better, but it was an okay first round for me.”

When Ovechkin struggled to rack points up at his usual productive pace this season, most observers figured it was due to one of three things – he was injured, out of shape or bummed after early exits from the Capitals and Team Russia.

Two of those three scenarios could be in play for Backstrom as well (although, to be fair, he might also be a supporter of Russia’s hockey team after playing alongside Ovechkin and friends for this long).

Personally, I tend to think he’s banged up. It might not be a big, serious injury that requires surgery once the season has concluded, but he could definitely be affected by the various bumps and bruises hockey players no doubt feel at this point in a hockey season.

If that’s the case, then Backstrom could once again find himself near the top of the stat sheet in the near future after the Capitals have basically enjoyed the NHL’s version of a bye week as they wait to find out who their second-round opponent will be.

If not though, I have to wonder how far this team can advance without any sort of production from the top-line center. I mean, we’re talking about a guy who just last season finished with 101 points in 82 games.

Counting only Backstrom’s 68 assists in 2009-10, he still would have finished fourth on the team in points, and his 65 points in 77 games this year were still second-best on the Caps.

For as long as he’s been in Washington, he’s been a point per game player (counting both the regular season and playoffs, he’s posted 354 points in 356 career games).

Guys like Johansson have been able to step up and help pick up the slack thus far, but it’s fair to ask how long the Capitals will be able to overcome a lack of production from Backstrom in the playoffs.

At the same time though, don’t blame me for hoping the Caps don’t have to find out.