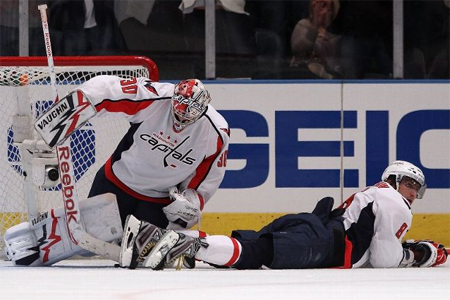 If you’re a fan of the Washington Capitals, there’s little reason to sulk after watching the New York Rangers edge out the Caps 3-2 Sunday.

Sure, it would have been great to see Washington push the Rangers to the brink of elimination, but look at it this way – New York was desperately playing for their season.

They had to win and their players came out with a sense of purpose from the moment the puck dropped in this one. They outhit, outshot and out-hustled the Capitals, and yet, it took a completely fluky bounce for the Rangers to even emerge victorious.

Rangers forward Brandon Dubinsky’s shot deflected off of Alex Ovechkin’s stick and then Karl Alzner’s shoulder before finding its way into the net with 1:39 left in regulation. That was the difference.

Otherwise, this game goes to overtime and a guy like Alexander Semin (who had a helluva game) has another chance to steal the show.

Obnoxious New Yorkers (redundant, I know) might be tempted to walk around overly confident the morning after their team finally arrived in the postseason, but go ahead and remind them that the Rangers threw everything they had at the Caps and it was barely enough.

And that’s before we even mention the disparity in penalties (eight on Washington, just four against New York) or the two five-on-three powerplays the Rangers bungled away.

The Capitals, who were whistled for eight penalties in the first two games of the series combined, spent a good chunk of the day working out their penalty-kill unit – even though both teams were playing the same physical brand of hockey that’s characterized this series.

And look, I’m not going to blame the refs for the Caps’ loss. That’s about as fruitless of an exercise as there is in sports. But I will say this – referees, in general, are at their best when they’re not noticed.

In Game 1, the Capitals and Rangers were whistled for just three penalties in more than 78 minutes of hockey.

The two teams combined for six penalties in Game 2 – although that’s a bit misleading because Rangers forward Brandon Prust was called for roughing after the game had ended.

That’s playoff hockey – two teams playing hard and physical with the referees largely agreeing to let the two teams settle it on the ice.

So why, then, did the zebras finally decide to insert themselves into the series for Game 3? Why were they so involved that coach Bruce Boudreau felt compelled during an in-game interview to point out just how many “ticky tack” calls were being made?

And most of all, if the referees were going to be overly aggressive, then why on earth were guys like Sean Avery and Prust allowed to repeatedly take cheapshots on Capitals goalie Michal Neuvirth?

During an extended stoppage in play (which happened after referee Chris Rooney hurt himself by tripping over the net), Prust slashed Neuvirth as the rookie goaltender skated over to his teammates.

The Rangers were on the powerplay for 10 minutes and 33 seconds in Game 3, and yet, it’s not worth blowing a whistle when guys are going after a goalie at center ice? All I’m asking for is a little consistency.

New York got the calls and the lucky bounces in this game, but truth be told, I’m someone who firmly believes you make your own luck.

The Rangers were the more aggressive team from the get-go, and the Capitals were on their heels (and in the penalty box) for much of the day, so it took a while for Washington’s offense to get going.

“It was kind of a weird first 30 minutes for guys,” says Knuble. “It was tough to get some flow going. Guys were in the box and not everybody can get on the ice at that point. So it was kind of a strange game.”

Unlike Game 2, which featured secondary scoring from forwards Jason Chimera and Jason Arnott, this one was all about the big guns.

Ovechkin, who continues to play his heart out, scored his second goal of the postseason with a minute left in the second period to tie the game at 1-1. The goal was assisted by Arnott, who now has three points in three playoff games for Washington.

With 5:12 left in regulation, veteran forward Mike Knuble scored a powerplay goal to tie the game at 2-2. Unfortunately for the Caps though, no one on the bottom half of the roster stood out in Game 3.

Energy guys like Matt Hendricks and Matt Bradley, who are usually counted on to provide a spark, were nonfactors. Speedy guys like Chimera and forward Marco Sturm seemed a step slow and out of synch.

And I’m still not sure what’s wrong with top-line center Nicklas Backstrom, but he’s clearly not himself at the moment.

After dropping from a career-high 101 points last season, Backstrom regressed to a career-low 65 points this season. And now, Backstrom has just one assist and four shots on goal through three games against the Rangers.

That’s why Boudreau felt compelled to drop Backstrom down to line two in favor of Arnott (even though the veteran won just four of 19 face-offs on the day).

Ovechkin, Semin, Arnott and Knuble are bringing it this series. Unfortunately, it’s Backstrom who has failed to make an impact against the Rangers.

And finally, for all the praise that Neuvirth deserved for his effort in the first two games of the series, the 23-year-old looked far less confident in Game 3.

When he’s on his game, Neuvirth makes goaltending look effortless. Sadly, this was not one of those days.

Neuvirth looked completely uncomfortable in net – allowing a goal by Erik Christensen from an impossible angle and nearly giving up another bad goal in the final seconds of the second period.

If the Capitals are going to rally back and win Game 4, they need guys like Backstrom and Neuvirth to turn in a better effort. They also need the entire roster to come out with a sense of urgency – especially in the first 20 minutes.

Everyone knows the Rangers are going to continue to play as if their season is on the line. On Wednesday, the Caps need to do the same.