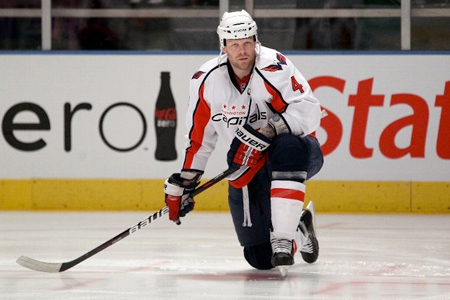 Earlier in the week, I wrote about the Washington Capitals having a tough decision to make when defenseman Dennis Wideman returns from injury.

The fact is, the team will have seven highly qualified defenders and only six spots in the lineup, so someone is going to have to sit for the good of the team.

After looking at the likely candidates, I came to the conclusion that the odd-man out would likely be defenseman John Erskine and since then it seems that some Caps fans have taken that to mean I don’t like Erskine or don’t want to see him in the lineup.

None of that is true, of course. I actually think he’s somebody who has worked hard to improve his game during his time in Washington and he’s exactly the type of gritty, sandpaper guy a team largely comprised of finesse players needs.

Coming off the heels of his stellar first-round series against the New York Rangers, I had the chance to catch up with Erskine and, as always, he was all smiles as we chatted about standing up to agitators, Wideman’s return and more.

“I think my game played well against the Rangers,” Erskine said. “They come hard at you and they play physical and both teams play solid defensively, so I guess it played right into my style of game. I love doing the hard hits and getting hit. That’s my kind of game.”

I would like to go back to one particular moment in the series, if that’s okay with you. When the Rangers scored a goal with time running out in Game 5 you basically got pummeled from behind. How do you not turn around and try to open up a can of whoop-ass on someone when that happens?

(Laughs.) “I tried,” Erskine admitted. “I tried and I got tackled by someone else. I think emotions were flying pretty high at the end there, especially with us knocking them out. There were a couple cheapshots at the end, but it’s all in good fun.”

I guess different people cope in different ways. Rangers players, it seems, opted to throw a temper tantrums when their season was over.

“Yeah, but we sent them home and we’re going on to the next round,” he said. “We’ve been in that position when you get beat out and I know it’s not a good feeling.”

Now, when you’re not mixing it up or embracing the physical side of the game, you’ve actually got a sneaky shot. There were a few times in the series where you got to unleash a blast from the blue line and those shots had some serious heat on them. Why don’t we see that from you more often?

“I don’t get that many chances,” Erskine said with a chuckle. “But if I get an open chance where I can go high on a goalie or something, I’ll pull out my slapshot every once in a while. With [Rangers goalie Henrik] Lundqvist, I was trying to go high heat over the shoulders. It worked once for me this year, so I kept trying to go with that.”

Your teammate Dennis Wideman seems like he’s getting closer to returning to action. When that happens, someone who played in Round 1 is going to have to sit. Are you even thinking about that stuff or do you figure it’s out of your hands?

“I think when they brought in Wides and [Scott] Hannan they knew you have to have a strong defensive corps to win any kind of championship, so when he comes back we’ll have seven or eight strong defenseman and we’ll be looking good.”

One of Erskine teammates, defenseman Karl Alzner, was nearby when we were chatting and he was more than happy to share his thoughts on the player who just might have the most underrated slapshot on the roster.

“His shot is a rocket,” Alzner said. “He’s always had that, I guess sometimes it’s just tough to get that shot away. And to get it away against New York is very tough to do. It’s one of those shots that just keeps rising and keeps going at a real good speed. I think it catches some goalies off guard.”

Because he took a grand total of four shots in five games, I figured I should also give his teammates to talk about the rest of Erskine’s skill set.

“He brings an overall physical presence and consistency,” said defenseman Mike Green. “He plays the same way every night and he plays that role to a ‘T.’ Gotta give him a lot of credit. Those are the type of players who are a big impact in the playoffs.”

Alzner was willing to take it one step further.

“He’s one of those depth guys that a team that wants to win the Stanley Cup needs to have,” Alzner said. “Look at Chicago last year. They had tons of those guys that nobody really knew a lot about, but those guys stepped up and played great. He’s just one of those guys for us who goes about his business and likes it that way.”

I’m not sure I believe Chicago actually had a team of Erskine last year, but I see what Alzner was getting at.

A guy who was once thought of as a liability by some Caps fans is no longer looked at in that light.

A player who was known more for his toothless smile is now a guy who the coaching staff feels comfortable playing for more than 15 minutes a night.

And best of all, if things get out of hand at any point in the next series and an opposing player even think about taking a cheapshot or two, coach Bruce Boudreau should have little doubt which defenseman to turn to.

If ever there was a man for that job his name is John Erskine, and he’s still chomping at the bit after not being able to finish what the Rangers started at the end of Game 5.