who sits when dennis wideman returns? 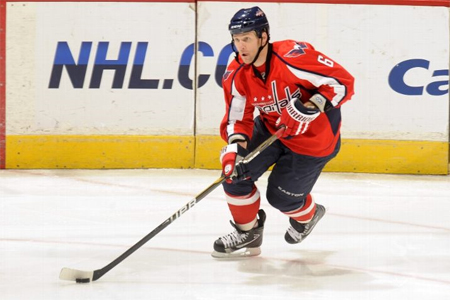 Admit it; it’s a good time to be a fan of the Washington Capitals.

While teams like Pittsburgh, Tampa Bay, Philadelphia and Buffalo give everything they’ve got in hopes of living to see another day, the Caps are enjoying an NHL rarity – a bye week.

All of the bumps and bruises accumulated during the first-round series against the New York Rangers have extra time to heal, coaches get additional time to break down film of what’s working and what needs more attention and everyone involved gets to recharge their battery, so to speak.

Best of all, a player like defenseman Dennis Wideman, who suffered a leg hematoma and compartment syndrome March 29, gets a few extra days to try and work his way back into the lineup.

Wideman, an offensive-minded defenseman who excels on the powerplay, was acquired by general manager George McPhee at the trade deadline specifically to bolster Washington’s depth at the blue line.

But that plan was put into jeopardy when Wideman suffered a knee-to-thigh hit from Carolina forward Tuomo Ruutu and suddenly no one was sure just how long the 28-year-old was going to be sidelined.

Fortunately for everyone involved, Wideman was able to practice in full pads Monday for the first time since the injury. There’s still no timetable for his return, although Wideman is confident he’ll play again this postseason.

When Wideman is ready to return though, Caps coach Bruce Boudreau is going to be faced with one of those “good problems to have.”

With seven healthy defenseman and only six slots in the lineup, Boudreau will be faced with a tough decision – especially after his Capitals allowed just eight goals in five games against the Rangers.

As I noted yesterday, rookie goalie Michal Neuvirth deserves a ton of credit for the Caps stellar play in the defensive zone, but he’s not the only reason Washington was able to dispatch a team in five games for the first time in 13 years.

Through the weekend, the Capitals led the league in blocked shots with 104 as defensemen have sacrificed their body for the good of the team.

What once sounded like lip service as folks struggled to explain a sudden lack of scoring now looks like sound strategy as the Capitals are finally playing the same punishing brand of playoff hockey critics have lamented over since Boudreau’s arrival.

The defensive rotation is playing so well these days that Boudreau all but admitted there’s little chance of veteran blue liner Tom Poti returning to action this season. But Wideman is a different story.

McPhee and company didn’t give away a prospect and a third-round pick so the guy could wear a suit and sit next to D.J. King and the other “healthy scratches” on game day. Wideman has one year left on his current deal at $3.9 million, and you can bet he’ll be back on the ice as soon as he’s medically cleared.

So the question becomes: which defenseman will be forced out of the lineup when Wideman returns?

It’s not going to be Mike Green, who is a lock for the lineup as long as he stops blocking shots with his head.

It’s also safe to assume that both John Carlson and Karl Alzner will remain in the lineup, since they routinely face off against the opposing team’s top line.

Which leaves three names for debate – Scott Hannan, Jeff Schultz and John Erskine. All three defensive-minded defensemen have played well thus far, but one of them will likely be bumped once Wideman is back.

I have a hard time believing Hannan won’t remain in the lineup, especially since he led all Washington defensemen in ice time during the first round. You don’t average more than 25 minutes of playing time a night unless the coaches feel confident in your abilities.

Sure, he’s not going to give you anything in terms of offense (Hannan took just two shots in five games against New York), but he makes up for it with his physical style of play and sound positioning in his own end.

The case to keep Schultz in the lineup goes like this – he led all Washington defenders with a plus five rating and tied for the team lead in blocked shots with 15.

A vocal minority continues to harp on Schultz because they see his big 6-foot-6 frame and dream of him morphing into the second coming of a one-man wrecking crew like Hall of Famer Scott Stevens. That’s just not who Schultz is though.

In fact, if you’re one of the people still turning blue in the face every time you see Schultz pass up a chance to lay out the opposition with a devastating check, then do us all a favor and stop reading this site. It’s not for you. Go color or watch Vin Diesel movies.

Schultz has been in Washington for more than five years now, so if you call yourself a Caps fan, then you should probably know what skill set he possesses by now.

Asking Schultz to become LaRon Landry on skates is like asking Antwaan Randle El to not signal for a fair catch every time he fields a punt or asking Stephen Strasburg to not throw so hard. It’s not gonna happen. Get over it and find something else to bitch about.

Which leaves us with Erskine.

Before the playoffs began, it was a no-brainer to assume that Erskine would be the odd-man out in this scenario.

But the 30-year-old has elevated his play pretty much across the board against New York – to the point that I actually found myself wanting him to shoot more when the opportunity presented itself.

Erskine is the one guy in the mix who is more than willing to drop the gloves in defense of a teammate. He’s happy to embrace the physical side of things and he’s no longer someone who gets lumped with Tyler Sloan when people are talking about liabilities in the lineup.

Sure, in all likelihood it’ll be Erskine who draws the short straw. But the fact that he’s played well enough to even make this a topic for debate says a lot about him.

So now, I turn to you. Who should sit and why?

[Update: My pals at Japers’ Rink have apparently had enough of the drive-by Schultz bashing. This fantastic nugget should finally put to rest the nonsense directed at Double Nickel.]