are you really prepared to let boudreau go? 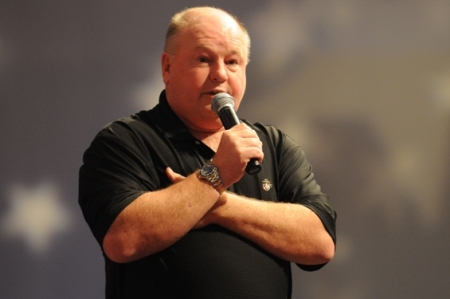 This is an interesting time for the Washington Capitals.

It really feels like this team (and this fanbase, to a certain extent) has reached something of an emotional crossroads.

On the one hand, you’ve got a franchise that has won four-straight division titles and finished as the top seed in the Eastern Conference two regular seasons in a row.

On the other, you’ve got a squad loaded with talent that has yet to accomplish much of anything in the postseason.

The question then becomes – what happens next?

More specifically, what happens if the Caps fail to live up to their lofty expectations? What is the breaking point if Bruce Boudreau and friends, once again, can’t get over the proverbial hump and make that all-too-elusive playoff run?

I ask this because on the eve of Game 1 of the Capitals opening-round series with the New York Rangers, I overheard more than a few Caps fans say some variation of the following:

“If the Capitals don’t at least make it to the Finals, then Boudreau has got to go.”

In fact, this seems to be one of the most popular “subplots” of the Stanley Cup playoffs – judging by the frequency in which Boudreau’s job security seems to come up.

In the last week alone, here are just a few of the places this topic has popped up:

Fair or not, this is what folks are focusing on these days.

Since Boudreau took over the team, the Caps have gone 189-79-39 during the regular season (.679 winning percentage). Unfortunately, Washington is just 14-15 in the playoffs during the same timeframe, which is why the topic is even up for debate.

I fully understand that a lot of new fans have embraced the Capitals over the last few seasons, which makes me question how many of them truly understand and appreciate how much more enjoyable being a Caps fan is these days.

And while Wilson did take the Capitals to their only Stanley Cup Finals appearance in his first season in Washington, he was just 3-8 in the playoffs after the 1997-98 season.

Earlier this season, I compared the Caps to the Indianapolis Colts. Both teams made a name for themselves as a regular-season powerhouse that won countless games to a high-powered offense. Both teams seemingly treated defense as an afterthought.

When Peyton Manning and the Colts finally won a Super Bowl in 2006, they had the third best offense and the 21st ranked defense. They embraced who they were, flaws and all, and it eventually paid off.

Conversely, Boudreau opted to change things up on the fly. While it would have been just as easy to turn a blind eye to the critics, he took the road less traveled and was willing to take a risk.

Boudreau didn’t panic when goal scoring and the powerplay went ice cold, he simply asked his players to be more responsible and accountable on the defensive end.

All coaches have an ego, but Boudreau deserves credit for being willing and able to set his aside for the good of the team.

Instead of stomping his foot and throwing a hissy fit because his players were no longer thriving in his system, Boudreau was willing to fundamentally change the makeup of his team on the fly.

That alone, sets him apart from guys like, say, Marty Schottenheimer or Steve Spurrier — gentlemen who are only capable of winning in a one-dimensional fashion.

Coaches like that have no flexibility. They’re incapable of thinking that they should adapt to their team’s strengths and weaknesses. They’re the ultimate “it’s my way or the highway” type of coaches.

That enables him to connect with his young players; to form a bond with a wide-eyed rookie getting his first taste of NHL action.

It’s no fluke that so many young players – guys like Marcus Johansson, Karl Alzner, John Carlson and many, many more – are able to jump from Hershey to the pros and thrive.

Boudreau is the ideal coach to mentor these young men, and I wonder if people realize that not every coach is able to get the most of out of seemingly every rookie that shows up in town.

I wonder if the critics who are in a hurry to run him out of town should the Capitals falter once again even think about things like that. Because I do.

I refuse to take Boudreau for granted because I remember what it was like before him and I’m fully aware at how little success any of the other teams in town have these days.

If the Redskins are the offseason champs, then the Capitals are easily the regular season equivalent. They haven’t done anything in the playoffs to warrant a parade, but they’ve made being a D.C. sports fan palpable during a decade or so of futility.

The best-case scenario involves the Capitals reaching their full potential and playing in their second-ever Stanley Cup Finals this year.

But if that doesn’t happen and the Caps’ season ends prematurely, I truly hope management thinks long and hard about all the good that’s come to this franchise since Boudreau took over before making any rash decisions.

I’d hate to see the Capitals become just another irrelevant team in town.