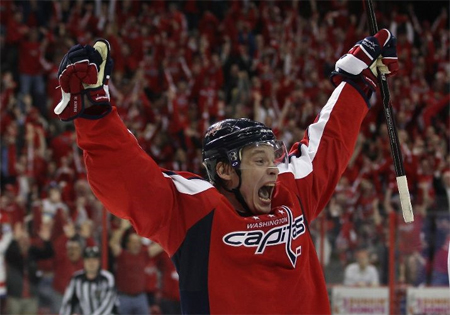 They say a playoffs series doesn’t begin until the home team loses a game. Well, thankfully, this series hasn’t started yet.

The Washington Capitals hosted the New York Rangers in the opening game of their first-round series and until the previous two years – which saw the Caps drop Game 1 – this time around the home team emerged victorious 2-1 in overtime.

In addition to going goal-less in seven games against the Canadiens, Semin also failed to score in the previous seven-game series against Pittsburgh.

So Semin broke the slump at the best time possible, scoring a goal for the first time since he lit up – as luck would have it – the Rangers during the 2008-09 postseason.

The last time Semin scored a goal in a playoff game prior to last night was April 28, 2009 – also known as Game 7 of the Caps-Rangers series. (Random sidenote: for what it’s worth, Washington won that game 2-1 as well.)

Semin had gone 14 games and 67 straight shots without finding the back of the net, which is why I wrote before the playoffs even began that he, more than any other Caps player, needed to show up in order for this team to have a shot at an extended playoff run.

And for one night, he answered the call. If only someone could have seen this coming and predicted it before the game started.

Of course, Semin’s rifle of a shot never happens if not for veteran center Jason Arnott, who continues to be worth his weight in gold.

The man who goes out of his way to try and connect with a quirky loner like Semin feeds him the perfect pass and Good Sasha did the rest.

Rangers goalie Henrik Lundqvist is absolutely one of the best in the world at his chosen profession, but he had no chance whatsoever to stop Semin’s perfectly-placed blast. He got caught drifting to his left too much and the shot blew by Henrik before he could even think about raising his blocker.

Best of all, Semin now has six goals in eight postseason games against Lundqvist, so maybe this is the psychological edge the Caps’ offense needs to get rolling in the playoffs.

On the other side of the rink, rookie Michal Neuvirth started his first NHL playoff game and he didn’t disappoint. The youngster stopped 25 shots on the night and never looked out of place or rattled – even as his goalie mask came flying off during a particularly hectic moment in Washington’s defensive zone.

He might not have been the first choice of some Caps fans, but Neuvirth looked the part on this night. He controlled rebounds. He wasn’t ever caught out of position. Basically, he did everything he could to keep his team in the game even when the offense was stalling for most of the night.

There were even a few occasions when the Rangers sent someone to get in Neuvirth’s face – even when the puck wasn’t necessarily nearby – and the 23-year-old never wavered.

“It’s an amazing feeling right now,” said Neuvirth. “It’s a big win for our group. It wasn’t an easy game, but we stayed with it. We hit the post a couple times in the first period so I knew right away it wasn’t going to be easy to score on Lundqvist tonight.”

As if that wasn’t enough reason for Caps fans to smile this morning, forward Alex Ovechkin also played a helluva game as well. The captain was everywhere – doing everything in his power to try and singlehandedly win this game.

All the talk of him being off his game is clearly a thing of the past, and while Ovechkin’s third-period goal was more luck than skill, they count just the same on the scoreboard.

“Sometimes you need a greasy goal like that,” said coach Bruce Boudreau. “It sparks your team.”

Ovechkin was hitting anyone and everyone he could line up. He was firing shots from anywhere and everywhere. And his energy was infectious.

The Capitals, clearly following Ovi’s lead, outshot (33-25) and outhit (35-31) the Rangers. They even blocked more shots than their opponent. There are some nights when the Caps are lucky to leave the rink with a win, but this wasn’t one of them.

Washington clearly earned this victory, and hopefully this is a sign of things to come – a statement game, if you will, to the rest of the league that the Capitals aren’t a one-trick pony.

This isn’t the flash-in-the-pan squad that could score goals and do little else. The majority of the roster embraced the playoff mentality – digging pucks out of the corners, crashing the net and generally embracing a physical style of play that makes a difference in the postseason.

And I’d like to take a moment to recognize rookie center Marcus Johansson, who never looked overwhelmed in his first taste of the Stanley Cup playoffs.

MoJo might have started slow, but he improved as the game went on and was clearly forcing the Rangers to take notice as he used his speed and vision to try and set up teammates in the later stages of the game.

Fellow countryman Nicklas Backstrom did not have the best game of his career, but Johansson looked very much at home in Game 1. And really, there weren’t too many areas of concern in this one.

The Capitals came out strong and while they didn’t score, they never panicked. Even after the Rangers took a 1-0 lead in the third period, you never got the sense that guys were trying to do too much or play outside of their game.

Everyone just took a deep breath and continued to work hard because they knew good things would happen.

Lundqvist had started 26 consecutive games for New York, so it’s not unreasonable to believe that while the guy led the league in shutouts this season; he was just as likely as anyone to wear down the longer the game went on.

Sure, winning Game 1 guarantees nothing in the grand scheme of things. Many teams – the Capitals included – have won the first game before ultimately losing a series. But be honest, it feels a lot sweeter today celebrating a win rather than dealing with another round of “Why can’t the Caps win in the playoffs?”