in playoffs, alexander semin is the key 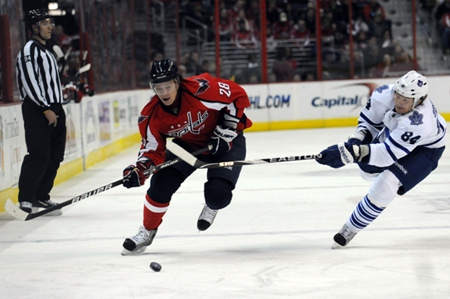 The Washington Capitals hosted the home finale of the regular season against the Florida Panthers Wednesday night and while they’re still fighting for the top seed in the Eastern Conference, it was nice to see the coaches take a “marathon” approach.

In theory, the Caps still have plenty to play for — specifically home-ice advantage all the way to the Stanley Cup Finals. But coach Bruce Boudreau and friends opted to play the Panthers without the services of defensemen Mike Green, Tom Poti and Scott Hannan, as well as forwards Jason Arnott and Alexander Semin.

The fact that the Panthers have been doormats for most of the season and are barely NHL-caliber anymore after a fire sale at the trade deadline meant the Capitals were likely to win anyway, and they did 5-2.

But it’s commendable to see the Caps brain trust resting vital players down the stretch in hopes that these same contributors will play a key role in the postseason. Sure, the move could backfire and a shorthanded Capitals squad could drop a few spots in the standings, but the team has its collective eye on a larger prize.

And for that to happen, the big guns need to be well rested and ready to roll. Which transitions nicely into today’s topic of conversation.

Going back to the Caps roundtable earlier this week, in which we chatted with the best and brightest bloggers covering the Capitals, the most interesting question asked during the entire discussion was “Which non-goalie is most vital to an extended playoff run for the Caps?”

Center Nicklas Backstrom, rookie defenseman John Carlson and Hannan each received votes from our esteemed panel, with the two other bloggers opting to go with the captain, Alex Ovechkin. And while a case could absolutely be made for any of those individuals, no player is more vital to this team’s success than the enigma that is Alexander Semin.

And that statement alone should scare the hell out of everyone.

Look, I’d love to say this team’s success hinged on a player like Arnott or forward Mike Knuble, because both are veterans who know what it takes to win and, just as importantly, know what the Caps need/expect from them. They’re low maintenance guys who can be counted on when a game is in the deciding moments.

And then there’s Semin.

In the last five minutes of a tightly-contested game, no Caps fan can say with any certainty whether Semin will score the game-winning goal or take a mind-numbing penalty that ends up costing Washington any chance at victory.

Be honest; he’s even money for either scenario.

But if you take a look at the Capitals’ recent playoff history, this team only wins when Good Sasha shows up.

Take, for example, last year’s series against Montreal. Semin fired 44 shots on net and, inexplicably, not a single puck reached the back of the net.

Whether we’re talking about bad luck or not, Semin is a player who, in nearly 400 career games played, scores on 14.5 percent of the shots he takes.

So if Semin simply played to his six-year career average, he’d have scored six goals against the Canadiens last season.

Now, I am willing to give Semin a pass to a certain degree because sometimes things just don’t go your way. But I asked my buddy Neil Greenberg of Russian Machine Never Breaks to chart Semin’s shot selection for the series and I think it’s pretty telling. 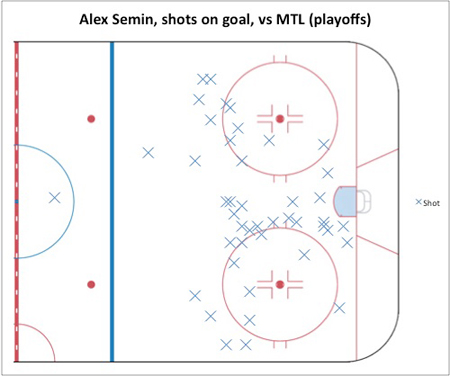 Look at how often Bad Sasha settled for long-range shots — specifically from behind the face-off dot. It doesn’t take a rocket surgeon to know the further away you get from the net, the harder it is to score.

Put it this way, a basketball team that relies on three-point shooting is in deep troubles if the shooters go cold. But an offense that crashes the boards and thrives in the paint is much more likely to excel in the playoffs.

Hockey is the same way. Teams tighten up in the postseason. Defenses are stingier. More players are hustling to get back in their own zone. There are more bodies in the way of long-range shots, which means there are more people to block shots.

All of that is working against a guy like Semin who is content to fire away from long range because there’s less of a chance of someone thumping him than if he were to try and crash the net.

Let’s go back another series — when the Capitals faced off with the Pittsburgh Penguins.

Semin was again held scoreless, although in this seven-game series he only fired 15 shots on net. But if you look again at Semin’s shot selection (again, brought to you by “Mr. Fancy stats” himself) you’ll see that nine of his 15 shots came from behind the face-off dot. 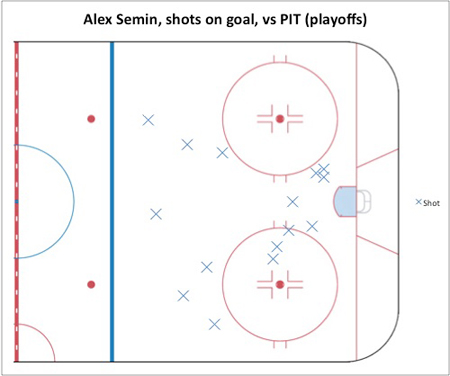 But in the first round of the 2008-09 playoffs, when the Capitals bested the New York Rangers, Semin was the difference maker. He scored on five of his 27 shots, with three of those five tallies coming from close range.

In fact, 10 of his shots fired that series came from close range, which you’d think would be incentive enough to get the guy to do it more often. But nothing is ever simple with Semin. 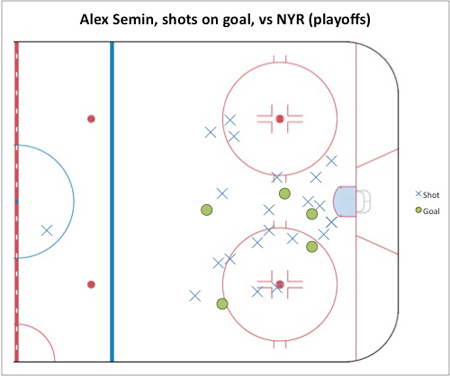 Fans who’ve been around a little while will recall that this current version of the Caps played in one other postseason series — falling to the Philadelphia Flyers back in 2007-08.

In that series Semin scored three goals on 28 shots. Unfortunately, the NHL’s in-depth stats (specifically the shot selection) isn’t available that far back. So we’ll just assume that that series only re-enforces my stance that good things happen when this guy buys in and crashes the net.

So if you’re a Caps fan (and honestly, why are you reading this blog if you’re not?), then the guy you better hope and pray shows up this postseason is Good Sasha.

The guy is currently making $6.7 million this season — which is $600,000 more than either one of the Sedin twins (who have combined for 192 points for Vancouver this season).

The Capitals are paying him as if he’s a superstar. Now is the time to prove he deserves it.