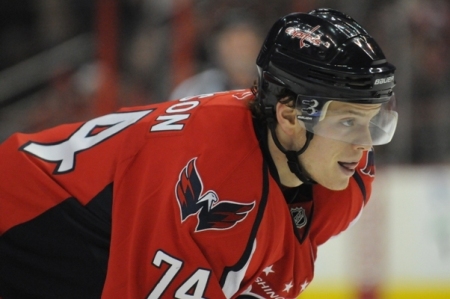 Although the Washington Capitals are in Toronto this evening to take on the Maple Leafs, it’s safe to say that most D.C. sports fans have already turned their attention to the playoffs.

With three relatively meaningless games left in the regular season, the Capitals simply need to get as healthy as possible – especially on the blue line – if they’re going to finally make that postseason run that’s managed to elude this team thus far.

As the regular season comes to a close, I thought it would be fitting to reach out to some of the most respected Capitals blogs with 10 questions on the mind of every Caps fan.

Our panelists for this exercise are Neil Greenberg from Russian Machine Never Breaks, David Getz from Japers’ Rink, Dave Nichols from Caps News Network, Jack Anderson from Kings of Leonsis and the gaggle of writers from On Frozen Blog. So thanks to everyone for participating and here are the best answers from our impromptu roundtable.

1. How would you sum up the Washington Capitals’ 2010-11 regular season in one sentence?

RMNB: The law of averages caught up to them.

OFB: Like a mediocre date: starts with a strong hello, slumps when the food is served and there’s forced conversation with a lack of energy/effort, but finally finishes on a positive note with some promise for the future.

2. Which Caps player has impressed you the most during the regular season? Why?

CNN: Michal Neuvirth. He’s shown he can handle the workload of being a starting goalie in the NHL.

KOL: Enough can’t be said about the young tandem of John Carlson and Karl Alzner. They have been rock solid with injuries hampering much of the remainder of defensive corps.

OFB: Scott Hannan. He is the player who has been forgotten this season. He plays like the team’s second best defenseman behind Dennis Wideman and looks like a solid leader.

3. In what seed will the Capitals finish the regular season?

CNN and KOL both believe the Caps will finish first. The rest of the gang voted for second place in the East.

4. Who would you like to see in round one? Why?

RMNB: Buffalo, since it looks like they will be 100 percent without goalie Ryan Miller or without a 100 percent Miller.

JR: I’d like to see the Carolina Hurricanes. From a match-up standpoint, they’re ideal because I think they’re overly reliant on Eric Staal and Cam Ward and because I don’t think their defense is good enough to stop the Capitals’ first two lines. From a schadenfreude perspective, I’d like to see Joe Corvo go out in the first round again, this time at the hands of the Caps.

CNN: I don’t care because I’m not afraid of anyone in the East. They are all too flawed in their own ways.

5. Who do you want the Capitals to avoid in round one? Why?

JR: I’d be most scared to face Buffalo, just because I think Ryan Miller’s the guy among bubble teams who could single-handedly win a series for his team. Every other facet of the game you can plan for, and I think the Capitals match up well with just about anyone, but with an elite goalie, you can only do so much.

RMNB: Boston or the New York Rangers. Both have a goalie that can get white hot and “Halak” them.

KOL: The Rangers. New York has the hottest goalie in the Eastern Conference plus a defense willing to block shots and limit opportunities. The Caps never usually respond well to a disciplined defensive front.

RMNB and JR both pledge their allegiance to Team Varly, while CNN and KOL side with Team Neuvy. OFB, thanks to a stubborn Elisabeth, opts for Team Holtby.

7. Which non-goalie is most vital to an extended playoff run for the Caps?

JR: Nicklas Backstrom.  He’s the one guy who doesn’t have anyone behind him capable of picking up the slack if he has to miss time.

CNN: Scott Hannan. If he were to go down with injury the Caps would be in big trouble.

OFB: The man who brought Jersey Shore to the locker room: John Carlson. He has the most minutes of anyone on the team, and, if both Mike Green and Dennis Wideman stay out, he bears the shared responsibility of a top defensive pairing and additional power play minutes. Plus, he can score in pressure situations (World Juniors, anyone?)

8. Who is most likely to be the team’s breakout star of the postseason?

RMNB: Marco Sturm. He has gotten a ton of good chances but no puck luck. If that changes (and he’s healthy) he could be the difference maker.

CNN: I don’t see a “breakout” locally, but Neuvirth will get attention nationally.

KOL: If Eric Fehr’s shoulder holds up he’ll continue his knack for scoring big goals and emerge as a vital piece on the third line.

9. How far do the Caps have to advance for you to consider this season a success?

Our esteemed panelists (and Jack), all agree that it’s Eastern Conference Finals or bust for the Capitals this year.

10. Which two teams will square off in the Stanley Cup finals (with my two cents added in parenthesis)?

KOL: Washington Capitals versus Detroit Red Wings (a rematch of a series Jack wasn’t alive for).

JR: San Jose Sharks versus Philadelphia Flyers (in hopes of jinxing both teams).

OFB: Washington Capitals versus Vancouver Canucks (only if Holtby is available though).